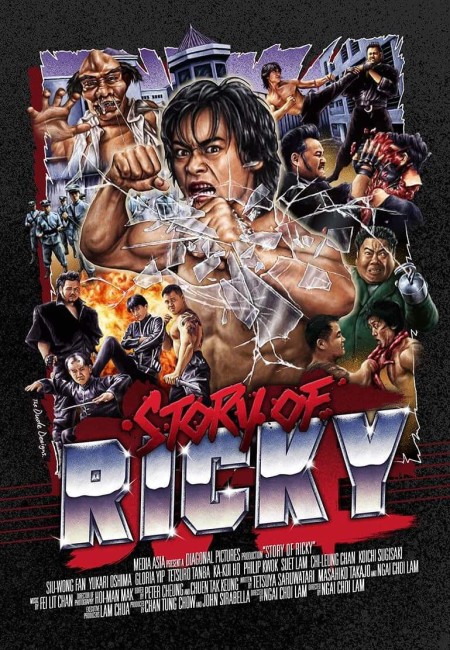 aka Riki-Oh: Story of Ricky

It is the year 2001. 21-year-old Ricky Ho, who has sworn vengeance on all drug dealers for the killing of his girlfriend, is convicted for murder and sentenced to a maximum security prison. Inside prison, Ricky must deal with both the sadistic prisoners, as well as the brutal warden who is obsessed with knowing where Ricky spent the last two years. Both combine to torture and kill Ricky. But Ricky fights back, having learnt special breathing techniques that give him enhanced martial arts abilities.

Story of Ricky, known in the US as Riki-Oh: The Story of Ricky, is one of the most outrageously gory films to have been made in some time. It ran into huge censorship problems in many countries as a result.

It is a film that wades in splatter. People have their faces sliced off with wood planes; Ricky punches through one guy’s head and his fist comes out the other side; the warden feeds prisoners into a meat grinder and at the climax, after being transformed into a monster, is himself ground down to mincemeat; eyeballs are whacked out; the hero is forced to eat razor blades.

In the film’s most amazing sequence, the hero and one of the villains face it out – the villain cuts through Ricky’s wrist tendon and then blinds him by throwing ground glass into his eyes; Ricky retorts by smashing a water main with his other wrist to clean his eyes then ties his sinews together with his teeth whereupon his opponent, seeing how tough Ricky is, guts himself and then tries to strangle Ricky with his intestines.

Story of Ricky is designed as a pure comic book for those who like it all the way. The purest comic book touch is the character of the assistant warden – a grossly fat pig with a glass eye and a metal claw in lieu of one arm. He is at various points throughout seen dragging prisoners along the floor with the hook in their mouths or using it to impale their hands to tables during interviews. And then there is his glass eye – in the first scene, we see him drinking a glass of water with a white ball in it and then removing it from the empty glass and putting it back into his eye socket, and later on he offers mints out of it to people.

There are times the comic book topples over into slapstick silliness, particularly with the character of the warden’s geekish son. The film also has hokey makeup effects and very poor English subtitling but all of this is made up for by the sheer comic-bookish enthusiasm of its gore.

Story of Ricky also falls into the genre crossbreed of the science-fiction prison film, which has included the likes of Escape from New York (1981), Turkey Shoot (1983), Spacerage: Breakout on Prison Planet (1985), Wedlock/Deadlock (1991), Fortress (1993), New Eden (1994), No Escape/Escape from Absolom (1994) and Death Race (2008). It shares the same thematic preoccupations of these films – usually that of a loner fighting a war against a corrupt system. Of these, Story of Ricky uses its science-fictional scenario in the most minimalist way possible – the future is only a means for it to set up an extremely harsh prison regime and beyond that it has no interest at all in being a science-fiction film, with the exception of the climax where the warden inexplicably mutates into 15-foot tall monster.