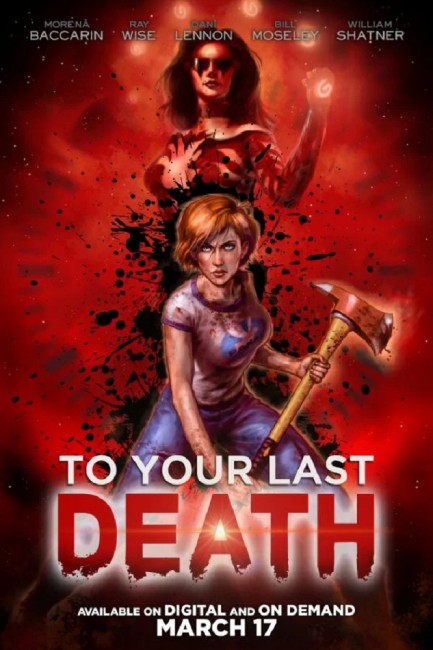 Miriam DeKalb bursts out of an office building wielding an axe and covered in blood where she is promptly arrested. Handcuffed up in hospital, she tells the detective her story. Her father Cyrus DeKalb, a billionaire weapons manufacturer, brought together all his children, including Miriam; her sister Kelsy who had married her father’s rival; brother Collin, a failed successor to her father; and brother Ethan, a rock star who was charged with killing his girlfriend in an erotic asphyxiation accident. Several years earlier, all four of them had come together and spoken out about the abusive upbringing they had received from their father, shooting down his chances to be nominated for Vice President. Cyrus had gathered the children to inform them that he had an inoperable brain tumour. However, instead of reconciling, he pronounced death on all of them. While the others were killed by his thugs, Miriam was able to make an escape when her guard was accidentally eliminated. In the hospital, she is now approached by the mysterious Gamemaster who offers her her freedom if she will participate in a game. A sigil is placed on Miriam’s hand and by tracing it she can replay events. She does so and the scenario is re-run from the point the four of them arrived to meet their father. Miriam tries to warn her siblings of the fate in store for them but they think she is crazy. As Miriam races through the office building trying to save the others, The Gamemaster reruns and manipulates the rules of the game to make things more interesting on behalf of a group of intergalactic entities that are betting on the outcome.

To Your Last Death was a feature-film debut for Jason Axinn, who had emerged from directing commercials and episodes of web series such as Chaotic Good Online (2009), Space Guys in Space (2012), Inside the Legend (2012) and Starpocalypse (2013-4). Axinn and his team raised the funding for the film via an Indiegogo campaign. To Your Last Death played at several international film festivals and was subsequently released to the internet.

To Your Last Death is definitely not children’s animation (the only niche that animation ever seems to be perceived as belonging in the US). The film takes a tone that is grim and hard-boiled and frequently wades in blood. In the opening scenes and occasionally throughout, Axinn shows the action split up into comic-book panels from which you glean that he is attempting to make the film resemble the visual equivalent of a graphic novel.

Perhaps the best way to think of To You Last Death is to imagine an animated version of The Belko Experiment (2016), the Greg McLean-James Gunn film with the staff of an office building forced to participate in a ruthless game where they had to hunt and kill one another. That crossbred with a timeloop film like Groundhog Day (1993) or in particular Edge of Tomorrow (2014) where Tom Cruise had to keep replaying the same day to triumph in an alien invasion. Only here this is a timeloop where the heroine not only has to keep replaying events but where the god-like aliens controlling the game keep changing the rules or interfering to make for a more challenging game. You could argue that Edge of Tomorrow is essentially an alien invasion film conceived of as a videogame ie. where the central character keeps rebooting after he dies and must replay until he gets it right. By the same token, To You Last Death could be The Belko Experiment reconceived as a videogame.

The appearances of the Morena Baccarin-voiced Gamemaster outfitted like a Cyberpunk superheroine who keeps popping up to change the rules of the game also adds to the sense of fun. On the minus side, the film reaches a major downer of an ending, one that almost seems a slap in the face for investing in the central character’s struggle.

One of the main drawbacks of the film is also that the animation is limited. Only parts of the frame move while backgrounds and other components remain static. The problem the film suffers is that it is hard to do gore-drenched horror in animation – see also Dead Space: Downfall (2008) and Seoul Station (2016). Try as it might, the blood looks just like streaks of red paint and lacks the viscerality you get in seeing this sort of thing in live-action. Certainly, To Your Last Death would look awesome if it had been made in live-action.