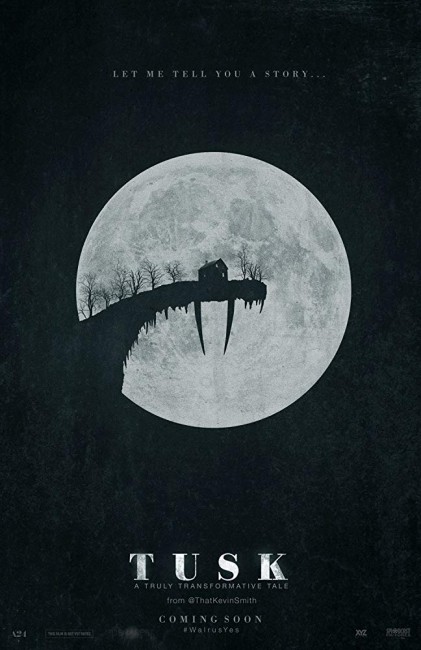 Wallace Bryton is the co-host of the successful ‘Not-See Party’ podcast. He travels from L.A. to Winnipeg, Manitoba to visit a kid who appeared in the hit ‘Kill Bill Kid’ viral video – only to find when he arrives that the kid has committed suicide. Frustrated at a wasted journey, he finds an ad in a men’s room from an aging, wheelchair-ridden former sailor offering free rent and plentiful colourful stories in return for help around the home. Wallace contacts Howard Howe, the poster of the ad, asking to interview him and hear some of his stories. He travels to Howe’s home in the countryside, finding him a fascinating raconteur. He then finds that Howe has drugged the tea he gave him. He comes around to find that he is strapped into a wheelchair and his legs have been severed. Howe’s initial claim that he was bitten by a spider falls apart as it is revealed that he is intending to surgically transform Wallace into a walrus to be his companion.

Director Kevin Smith emerged in the 1990s, creating a cult hit with his low-budget independent feature Clerks. (1994). He went onto direct a string of other films in a similar vein with Mallrats (1995), Chasing Amy (1997), Dogma (1999) and Jay and Silent Bob Strike Back (2001), which are filled with frat boy humour, nerdish in-jokes and characteristically witty and sarcastic dialogue. Come the mid-00s, Smith had built a solid cult following as filmmaker, comic-book author, Twitter correspondent, live raconteur, podcaster and occasional actor. Although during this time, directorial efforts like Jersey Girl (2004) and Cop Out (2010) gave the feeling that Smith had started to lose direction or in the case of Clerks II (2006) that he was just rehashing material. On the other hand, the Kevin Smith of the 2010s seems someone looking for new directions, which seemed to come about with Red State (2011), an uncharacteristically serious effort for Smith concerning a religious cult, and Tusk, Smith’s first full-fledged leap into the horror genre.

Kevin Smith is always a director you thought should have conducted a full-blown genre film before now – his films come packed with wry and witty Star Wars jokes. I would have far preferred to see his originally touted version of The Green Hornet (2011) than the Michel Gondry abortion. He did make the rather good Red State, which Smith calls a horror film, although I feel like it is stretching genre definitions to list it as such. The only other full-fledged Smith venture into genre material was Dogma (1999), although that felt more like it was Kevin Smith monologuing on Catholicism first before it was a work of fantasy. Smith did work as initial scriptwriter on the aborted Tim Burton-Nicolas Cage Superman film Superman Lives during the late 1990s – well worth seeing is the documentary The Death of “Superman Lives”: What Happened? (2015) in which Smith is interviewed and recounts his experience.

Since 2007, Smith has co-hosted SModcast, a twice weekly podcast, along with Scott Mosier in which the two of them (with occasional guests) monologue and offer wry commentary on popular culture, general happenings and the strange and weird. Tusk is based on The Walrus and the Carpenter (2013), which was SModcast #259. This was based on an ad the two had found on the website gumtree.com advertising free rent if the tenant was prepared to dress up as a walrus. Smith and Mosier spent the podcast speculating about the owner’s motivations and coming up with a backstory. Smith then asked Twitter fans to respond with the hashtag #walrusyes or #walrusno in favour of whether to make a film out of the idea or not, where the yes vote came out in a clear majority. The ad was eventually revealed to have been placed as a prank by British fan Chris Parkinson who was subsequently hired by Smith as a consultant on the film.

For me, the title Tusk always conjures associations with Tusk (1980), the legendary Alejandro Jodorowsky film that has never been seen outside of France. Or maybe if you come from a certain era, it represents the defining Fleetwood Mac album Tusk (1979) and/or its hit title track. For Kevin Smith, it represents a full-out venture into genre material. Tusk has a genuine WTF ‘where the hell is this going?’ unexpectedness to it for some way into the show. The centrepiece of the film is Michael Parks who gave an amazing performance for Smith as the batshit crazy cult leader in Red State. Here Parks gives a performance that is unlike anything we expect of a madman. In the initial scenes where we meet him, he proves a fascinating raconteur of tall tales. He has a polite quietness and understatement – there is something wonderfully theatrical to the way he talks at the table before the jolt unexpected moment where he gets up out of his wheelchair.

Eventually, Tusk ends up in the same territory as The Human Centipede (First Sequence) (2009) and The Human Centipede II (Full Sequence) (2011). I went with the film for about its first half but [PLOT SPOILERS] the scene where we eventually see Justin Long surgically transformed into a walrus has equal amounts shock as it does utter absurdity. After this point and through would-be tender scenes like where Michael Parks lies up against the suffering Long telling him he is his best friend, Tusk becomes a film that you are unsure whether you should be taking seriously or laughing. This is a balance that feels it has evaporated altogether about the point where Michael Parks gets into a walrus suit to have a fight with Justin Long, as all the while Fleetwood Mac’s Tusk plays on the soundtrack.

Mindedly, you can pinpoint the juncture where the film’s serious intent goes out the window – about the time of the introduction of the comic Quebecois detective (played by an uncredited Johnny Depp). First of all, this seems more like a character that Depp and Smith have based on a comic caricature of a Frenchman than anybody you would be likely to encounter from the Quebec province. Depp plays the part indulgently silly during the scenes in a fast food joint and especially during the flashback encounter with Michael Parks where both actors seem to be in a competition to deliver the silliest accent.

One also ends up questioning the medical believability of the central premise. The walrus has a lot more blubber than the human body – the internet tells me that the average body weight of the walrus is around 2000 pounds, which is about ten times the weight of the average human being – so you cannot help but ask where does all the excess body mass come from? That surely means that Justin Long’s character is either wearing a body suit made of padding or else fat taken from someone else. Wearing someone else’s fat would surely result in major problems from tissue typing so most likely it would be a suit of artificial padding. The question then is – why leave Justin Long that way at the end, why not simply remove the padding? The other thing that gets me is that to carry such amount of body weight, the walrus has a much tougher and heavier bone structure than a human being and it would be extremely difficult for someone to drag around 1800 pounds of blubber, not to mention do so on freshly surgically altered arms. In the scenes here where the transformed Justin Long is dumped in a swimming pool, if he were carrying anywhere near 2000 pounds body weight, I would have serious doubts he would be able to lift himself out of the water again.

As a current resident of Canada, there are some matters I have to take Kevin Smith to task over. Harley Morenstein has a mildly amusing scenes as a Canadian border guard, although this is clearly a character born of Smith’s penchant for witty self-reflexive monologues than anybody who would ever be likely to find employ in Canadian Border Services Agency who, as a rule, tend to act more like cops, perfectly polite but with sense of humour surgically removed. There is also Johnny Depp’s line “Canada doesn’t have any serial killers,” which is simply untrue – look up names such as Paul Bernardo and Karla Homolka, Robert Pickton, Clifford Olsen Jr and Gilbert Jordan to easily disprove this. To give Smith credit, he does have Michael Parks giving monologues about obscure figures (at least to the outside world) such as Maurice Duplessis, the controversial Quebec premier of the 1940s and 50s.

Tusk is apparently the first in a trilogy of horror films that Kevin Smith has said he will set in Canada. Next up was Yoga Hosers (2016), which features return appearances from Johnny Depp as detective Guy LaPointe, as well Lily-Rose Depp and Harley Quinn Smith, the daughters of Depp and Smith who play the two convenience store clerks here, fighting miniature cloned Nazi soldiers. Smith also stayed with horror to make the Halloween episode of the horror anthology Holidays (2016).