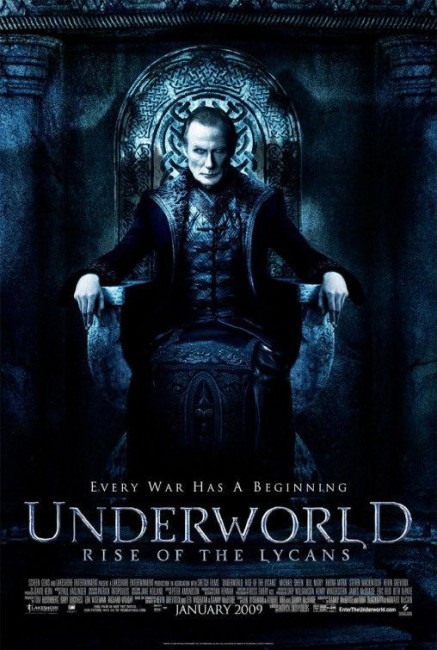 The vampire ruler Viktor discovers a Lycan child that has the ability to transform back to human form unlike the rest of its kind. He adopts the child, calling it Lucian, and allows it to grow up among the vampires. Regarded with disdain by most of the vampires, Lucian is kept on a collar that prevents him transforming and is used by the vampires to kill other Lycans that regularly maraud against the castle. However, Viktor’s daughter Sonja starts conducting a forbidden liaison with Lucian. When Sonja is attacked by Lycans outside the castle, Lucian slips his collar with a key he has secretly made and races to her rescue. The angry Viktor punishes Lucian by throwing him in the dungeons. There Lucian rallies the other prisoners and determines to make an escape and raise an army of Lycans.

Underworld: Rise of the Lycans was the third of the films that began with Underworld (2003). Underworld was a modestly budgeted effort from debuting director Len Wiseman, made with a slick and stylish series of Gothic poses. Wiseman, along with his lead actress/wife Kate Beckinsale, continued the saga with Underworld: Evolution (2006) where everything was expanded on a big budget that promptly buried everything under CGI effects overkill. Underworld: Rise of the Lycans is a prequel to the events of the other two films, telling the story of the origin of the war between the Lycans and the vampires. This time Len Wiseman has dropped out (at least to a co-writing/co-producing position) and Kate Beckinsale is absent (excepting for one brief shot at the end).

This time direction has been handed over to Patrick Tatopoulos. Tatopoulos gained a reputation as a creature effects supervisor after Independence Day (1996). Tatopoulos has since created his own self-named company, providing creature effects for prominent films like Godzilla (1998), Battlefield Earth: A Saga of the Year 3000 (2000), Pitch Black (2000), I, Robot (2004), Silent Hill (2006), I Am Legend (2007) and of course the other Underworld films, among other. Like Len Wiseman, Patrick Tatopoulos came to direction after gaining attention in the effects department of Roland Emmerich. Underworld: Rise of the Lycans is Tatopoulos’s debut as a director, although he had earlier made a short film Bird of Passage (2000). He has since been announced as a director of several other potential projects.

Rise of the Lycans purports to be a prequel to the other two Underworld films. In truth, it is the same thing as before – everything that happens is devised in terms of kinetic happenings, explains little and the plot could just as easily have functioned as a sequel rather than a prequel. Certainly, there is slightly more to it as a story and slightly less the case of everything being overwhelmed by effects than there was in Evolution but the film has largely only been construed around wolves snarling, swords flashing and blood/gore. In particular, the stylish Gothic poses that was the mark of the first film has been toned down to merely a uniform midnight gloom.

The effects work is expectedly excellent. The film’s standout set-piece is where Rhona Mitra is tied up and exposed to the sunlight, causing her body to char to a cinder. The problem with this as a scene is that you are going “wow, that was a cool effect,” rather than feeling the tragedy of loss over one of the central characters. It is a problem that is indicative of all the Underworld films, which become an array of poses and effects that wash over you as all effect and zero substance.

One of the most unintentionally funny things about the film is Michael Sheen as the Lycan hero. Sheen has been in all the other Underworld films but in between Evolution and Rise of the Lycans he gained a reputation as a serious actor, most notably with his performances as real-life figures such as Prime Minister Tony Blair in The Queen (2006) and David Frost in Frost/Nixon (2008). It is amusing watching him in long, unkempt hair and bared chest, roaring and snarling while covered in blood. You keep having these flashes where you think “Okay, so I’m watching Tony Blair turn into a werewolf and tearing people’s throats out.” The same problem also cropped up with Sheen’s turn as a vampire in New Moon/Twilight Saga: New Moon (2009) later the same year.

There is also the lovely Rhona Mitra, a beautiful actress who has started developing a growing profile in the last couple of years. She fills a similar kind of role to what Kate Beckinsale did in the previous two films. Though she displays slightly more expression than Kate Beckinsale, Rhona does not get much of an opportunity to do anything other than look fierce and parade about in some nifty outfits, before being bumped off in mid-film. Bill Nighy returns from the previous films and looks quite ill beneath the pasty white makeup where he gives a performance that seems to indicate he is suffering from severe gastric distress.