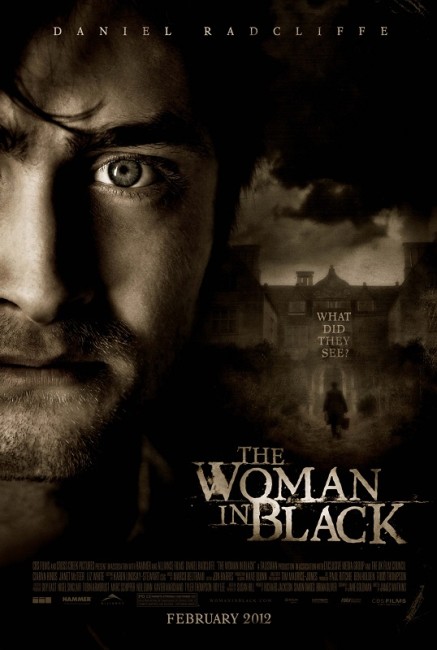 England, the turn of the 20th Century. Lawyer Arthur Kipps is grieving following the death of his wife Stella. He is sent by his firm to the remote village of Crythin Grifford to wrap up the estate of the late Alice Drablow and sell Eel Marsh House. Travelling there, Arthur finds a lack of welcome among the villagers who want him to leave immediately. Spending the night in the foreboding Eel Marsh House to go through the estate’s paperwork, Arthur sees ghosts. As Arthur digs deeper into the house’s part, he comes to understand the nature of the sinister figure of the woman in black who is intent on obtaining vengeance by murdering all of the townspeople’s children.

The Woman in Black was the fourth film from the revived Hammer Films. Hammer was where horror was at during the 1960s and 70s, most notably producing the Peter Cushing-Christopher Lee Frankenstein and Dracula films, among a great many other works, before closing up shop in the early 1980s. The company name was purchased by Dutch tv producer Jon de Mol and Hammer revived in 2007. Their first effort was the web-released serial Beyond the Rave (2008), followed by the theatrical release of the Let Me In (2010), which received some very good critical acclaim. Over the next year, they also put out The Resident (2011) and Wake Wood (2011), which were both above average, and The Woman in Black was followed by the hackneyed The Quiet Ones (2014) and The Lodge (2019).

As becomes apparent through all of these is that the new Hammer is no longer a production house in the same way that the old Hammer was where they had their own studio, regular directors, producers, actors and creative team, but has become no more than a brand name placed on works that someone else has produced, not unlike artists such as Damien Hirst and Jeff Koons who sign their name to works painted by others. In the case of The Woman in Black, Hammer is merely one among six other production companies that hail from across the UK, Canada and the US.

The Woman in Black was a prestige production for Hammer. They have placed a big budget into it and obviously gambled a good deal by procuring the headline name of Daniel Radcliffe, making his first serious dramatic leading role after the end of the Harry Potter franchise. It was also the first of the Hammer films since Let Me In to be granted a widespread theatrical release rather than going to dvd or spotty festival appearances (and ended up the most financially successful film of the revived Hammer). The Woman in Black is directed by James Watkins who previously made the horror film Eden Lake (2008), as well as wrote the scripts for My Little Eye (2002), Gone (2007) and The Descent: Part 2 (2009). The script for The Woman in Black comes from Jane Goldman, a rising name in recent years for her collaborations with Matthew Vaughn on Stardust (2007), Kick-Ass (2010), X: First Class (2011), Kingsman: The Secret Service (2015), The Limehouse Golem (2016), Miss Peregrine’s Home for Peculiar Children (2016) and Kingsman: The Golden Circle (2017).

The Woman in Black was originally a novel published in 1983 by Susan Hill that was then made into a popular play The Woman in Black (1987). The play was notable for the fact that it was only performed by two actors, one playing Arthur and another all the other roles. This was adapted into a tv movie The Woman in Black (1989) with a script by no less than genre legend Nigel Kneale, the creator of Quatermass. The original play and book are more complex than the film version here, with the reasons why the Woman in Black wants to kill children having been lessened, while the film also invents a backstory for Arthur Kipps, having him haunted by the loss of his wife, whereas in the play he marries her at the end.

The Woman in Black immediately has the feel of a ghost story in the classic British tradition. The foreboding haunted manor, the character haunted by tragedy in his past, the town’s dark secrets, the turn of the century setting are all standard tropes for the Victorian ghost story. The title has been intended as a reflection of the Wilkie Collins classic The Woman in White (1859), which was highly influential on the 19th Century Gothic tradition and similarly featured a mystery woman in a veil lurking around graveyards and country estates (although The Woman in White is in itself not a ghost story). Equally, the character of the lawyer who is sent to a remote and foreboding location to conduct a routine transaction of paperwork is strongly reminiscent of Jonathan Harker in Bram Stoker’s Dracula (1897). Daniel Radcliffe’s hero Arthur Kipps also has the name of the protagonist in one of H.G. Wells’s few non-science-fiction novels Kipps: The Story of a Simple Soul (1905) about a working class lad who becomes upwardly mobile.

The cinematic ghost story, which is usually set in a big, gloomy mansion and/or the Victorian era, is in fact a relatively modern phenomenon that comes from films like The Haunting (1963), The Legend of Hell House (1973) and The Changeling (1980). The only effort made in the period when everyone assumes the ghost story exists – the 1940s – was The Uninvited (1944), while far more commonly the era used large gloomy mansions but almost invariably revealed what was happening to be of mundane origin or where the supernatural was relegated to light fantasy treatments as in The Canterville Ghost (1944) and The Ghost and Mrs Muir (1947).

The classic ghost story has become a dying breed since around 1980s and the likes of The Amityville Horror (1979), The Shining (1980) and Poltergeist (1982) where it was transplanted out of Victoriana and/or large creepy old mansions and into the present day and suburbia. Indeed, the last ghost story in the classic tradition – with large gloomy mansions, set in the Victorian/Edwardian era and an emphasis on the accumulation of atmosphere over pop-up shocks – was The Others (2001). (Although, four months before The Woman in Black came out, there was also the fine The Awakening (2011), which did a far better job of capturing the essence of the Victorian ghost story).

The Woman in Black starts promisingly. A reasonable budget has been lavished on the film and it gets the Victorian period setting right, creating a lavish looking house and village while impeccably outfitting the characters. The film has been shot around the Yorkshire area and contains some exquisite photography of the moors, marshes and mist covered valleys. There is much mood-building involving sinister looks from the villagers, the ominous lead-up to the large, overgrown house and suggestion of a portentous past. It is a superb piece of scene setting that any classic ghost story would be envious of.

The cast is a line-up of seasoned pros, where the only one who falls down amid this is Daniel Radcliffe, made up with a pasty white face like he is in an advanced state of consumption just in case we might be under the mistaken notion that this is not serious acting. Despite such, Radcliffe fails to give the impression he is much stretching his acting talents. He still demonstrated far more range in the latter Harry Potter films.

Alas, there is the point where The Woman in Black kicks in as a ghost story and things start to fall apart. In James Watkins’s hands, the film promptly becomes a series of irritating pop-up scares. I have remonstrated elsewhere about horror films that are constantly trying to get false jumps out of the audience by creating loud jumps on the soundtrack. The Woman in Black gets several contrived ones off in the early scenes after Daniel Radcliffe’s entry into the house with the loud amplified blast of water out of a tap and with birds bursting into a room.

Thereafter, The Woman in Black started to annoy me. I wanted to like it – I went in with extremely high expectations that it would be a good cerebral ghost story that harkened back to something of the original The Haunting. Unfortunately, the rest of the show – especially a long section where Daniel Radcliffe spends the night in the house – becomes tiresome and repetitive with more amplified jolts on the soundtrack, shadowy things flitting in the fore- and background, appearances of the Woman in Black floating across the room to scream etc. It has the effect of being a film that is constantly jabbing an audience in the ribs going “boo.”

Disappointingly lacking, for the classic ghost story that The Woman in Black wants to be, is the accumulation of any atmosphere. Indeed, what The Woman in Black gives all impression of being is a work that has pillaged the classic ghost story and turned it into something for a modern MTV generation ADD-addled audience. In doing so, it has eschewed anything of slow accumulating mood in favour of instant jabs and spikes of zero lasting impact.

Hammer produced a sequel with The Woman in Black: Angel of Death (2014).