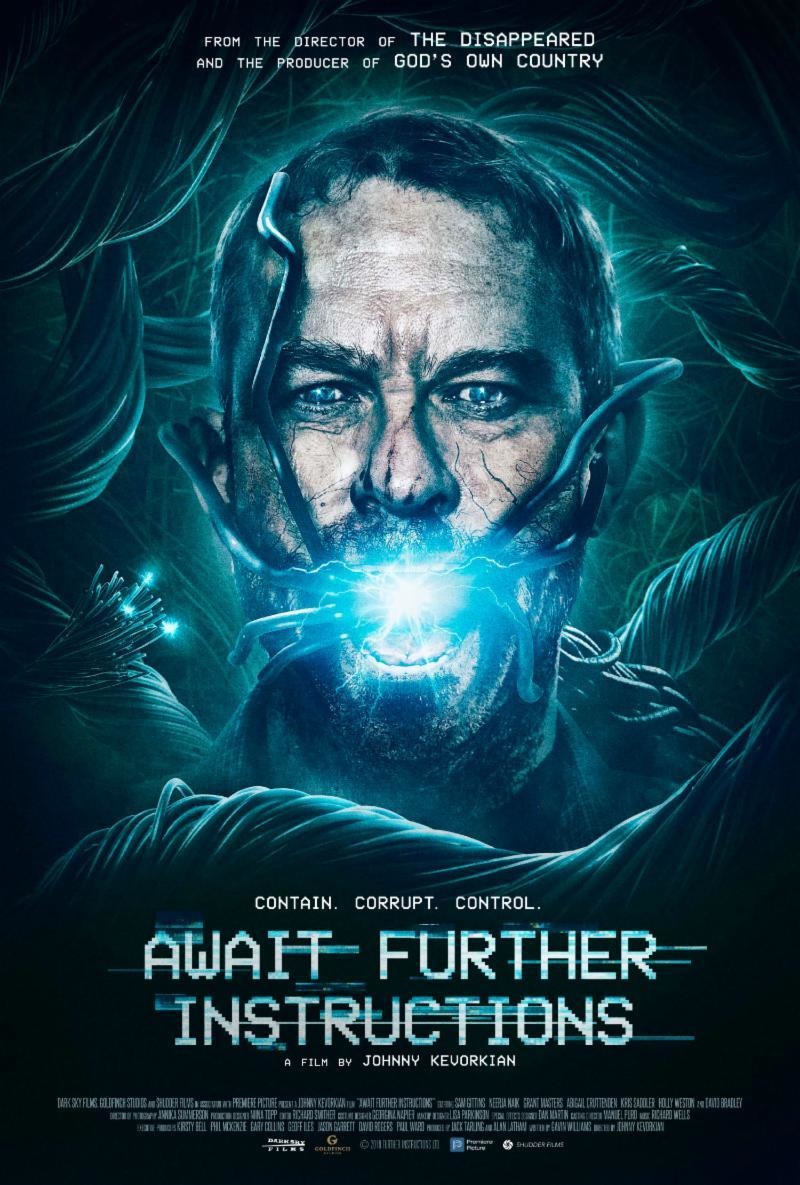 Nick Milgram, along with his girlfriend Anji, makes an unannounced visit to his family on Christmas Eve, joining his parents, grandfather, his pregnant sister Kate and her boyfriend Scott. There is soon tension caused by father Tony’s strict and dogmatic ways and the racial slurs tossed at the Indian Anji by Grandad and Kate. Nick and Anji decide they will leave in the morning. They wake only to find that while everybody has slept, barriers have been placed up all around the house preventing them from leaving. As everybody puzzles over what has happened, the tv set begins to broadcast messages that instruct them to destroy all the food and wash themselves because they are contaminated. The messages become more extreme, saying that one of them is infected and must be quarantined and then that one of them is a spy. As Tony insists on following everything they are told, believing they are instructions from the government, this stretches tensions in the house to breaking point.

Await Further Instructions was the second film from the intriguingly named British director Johnny Kevorkian. (Part of you cannot help but wonder if this is a pseudonym taken in homage to famous euthanasia advocate Dr Jack Kevorkian and/or intended to evoke some kind of horror association with the name). Johnny Kevorkian had previously directed the ghost story The Disappeared (2008).

Await Further Instructions falls into the mini-genre of imprisonment thrillers that came about after Saw (2004). Saw and sequels and the body of imitators that followed served up a series of scenarios that involved a group of people locked in a room and being brutally tortured or having to make some harsh choice to save their lives. There were a few amid this such as Buried (2010), a minimalist thriller with Ryann Reynolds trapped in a coffin for the duration, and Exam (2009) with a group of job applicants locked in a room and forced to answer a question, that aimed for more existential places than just serial torture. Await Further Instructions certainly sits amid the latter.

Gavin Williams’ script is interested in asking question about the nature of authority and obedience. To this extent he readily homages the Stanford Prison Experiment – the famous 1971 experiment where a group of students were divided into prisoners and guards before everything descended into psychological intimidation and sadism – and the experiments of Stanley Milgram – where a group of volunteers were led to believe they were being given orders to administer severe electric shocks to other volunteers. (In the film, the name of the family is Milgram while they live on Stanford Street).

The film contains the situation – a group of seven people imprisoned inside a house. Everything is stripped to an existential minimum – we never find out what the agency sending the messages through the tv is nor what it is that is surrounding the house. Tensions mount in disturbing ways from about the point that Sam Gittins and Neerja Naik arrive at the house and both grandfather David Bradley and sister Holly Weston start mouthing both conscious and unconscious racist comments.

In his script, Grant Williams is fascinated with the way that people respond to authority with Grant Masters’ father unquestioningly obeying everything that comes through the tv and most of the others in the house meekly going along with it, uncertain about whether to stand up against things even as the tv set starts issuing orders to treat one of the group as a spy and Masters begins in torturing his own son Sam Gittins. The scenario and characterisations are particularly well written. Grant Masters gives an excellent performance as the father who is simply an ordinary dull middle-management type who is dogmatically trying to do what he is told – this is exactly what comes to mind when people utter the excuse “But I was just following orders.”

Things get weird in the last ten minutes where it feels like the film lacked either a wrap-up act or else the fact that the effects company Viridian FX co-produced the film meant that they had to do something to showcase their talent. Here the film goes off at a weird tangent [PLOT SPOILERS] and has the tv wanting to be worshipped and Grant Masters falling to his knees in front of it. This is followed by scenes where the tentacle things (that’s the best description I have as the script offers none whatsoever) invade the house and reanimate Grant Masters’ body before Kevorkian conducts a pullback to show they have taken over much of the neighbourhood. Quite what they are or their purpose is is utterly baffling and leaves a three-quarters fine film going out on a note of “huh”.

(Nominee for Best Supporting Actor (Grant Masters) at this site’s Best of 2018 Awards).