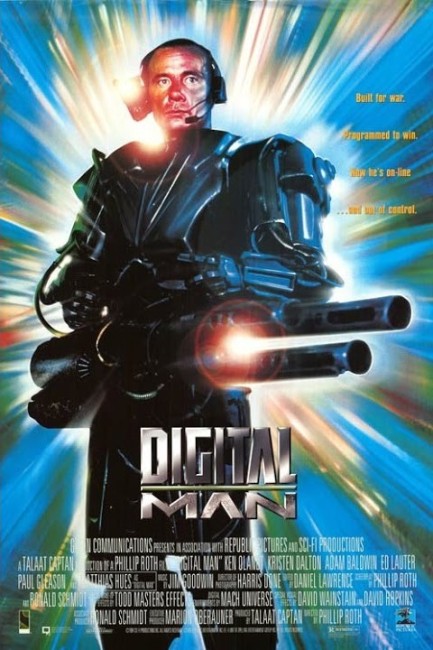 When terrorists hijack the codes for 120 nuclear missile silos, an army captain sends Digital Man, an untested military android, in to stop them. The operation is successful but while returning to base Digital Man goes astray in the small town of Birdwater, Nevada and starts eliminating everything it sees. A crack ground unit is sent in to stop Digital Man but face problems from a traitor back at command control who is determined to sabotage the mission and the realisation that several of their number are androids without even they themselves knowing it.

Like every direct-to-video sf/action hybrid of the 1990s, Digital Man plays like a cut-and-paste collage of elements from foregoing films – the invincible killer android; the team of tough soldiers a la Aliens (1986); the Dark Future Cyberpunk settings; Virtual Reality; confusion over who and who is not an android.

The action moves passably well and the basic set-up does a fair job of creating a tensely confined situation – a platoon trapped in a small town up against a near-invincible android with their support refusing to pull them out and they not knowing who among their number is an android (although, one thinks a better director could have built it up more intensively). Even the comic relief between Don Swayze, Patrick’s butt-ugly brother, and Chase Masterson, later a regular on Star Trek: Deep Space Nine (1993-9) as two hick locals, is amusingly well done.

Unfortunately, the script is not up to the job. It is extremely confused in places – it is never clear at various points who the traitor is and the film never offers them any motivation. Megan Blake’s character is even given a different name on the credits than the one she is referred to in the film. The issue of the androids among the troupe also gets silly, particularly when it is revealed that every single person in the group except the hero and heroine, and including the most vehemently anti-android person, are all androids.