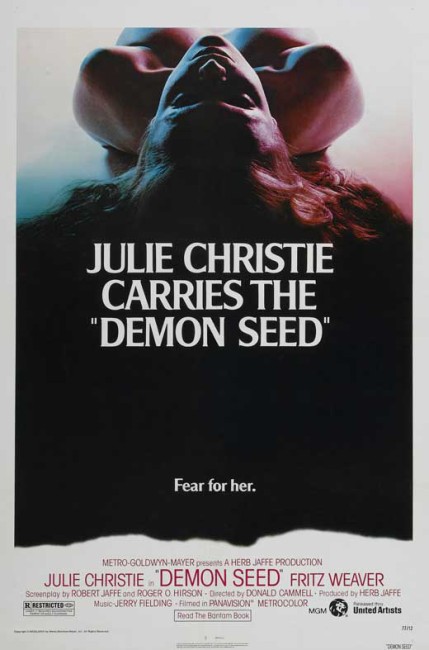 As soon as its creator Alex Harris activates it, the super-computer Proteus IV starts to question orders and becomes uncontrollable. Alex shuts down all terminals to try and stop Proteus. However, he has forgetten about the terminal in his estranged wife Susan’s house. Desiring to experience what it is to be human, Proteus takes the house over, making Susan its prisoner. It then announces it is going to impregnate her and force her to bear its child.

Demon Seed (1973) was one of the early novels from Dean R. Koontz. At that point, Koontz had not yet emerged as the best-selling horror novelist he is today. The film rights to Demon Seed were picked up by MGM and the director signed on was the idiosyncratic Donald Cammell. Cammell had had a cult hit as co-director of the amazingly weird Performance (1970). However, Cammell was a director/writer who almost entirely refused to compromise his artistic vision and, although he wrote a number of other unproduced screenplays, it was not until Demon Seed that he was granted the director’s chair for a second time. As a result of single-minded refusal to compromise, Donald Cammell was only ever granted two other opportunities to direct before his death by self-inflicted gunshot wound in 1996 – the stylistically dazzling psycho-thriller White of the Eye (1987) and the erotic thriller Wild Side (1995). (Indeed, studio interference with Wild Side is spoken of as the reason that drove Cammell to suicide). To all accounts, the shooting of Demon Seed as not a happy experience for Cammell with the studio recutting the film behind his back.

Alas, it is clear that neither Donald Cammell, his scriptwriters or apparently anybody who had anything to do with Demon Seed had much of a grounding in science-fiction. This is immediately apparent in the changes that Dean R. Koontz’s book undergoes in its translation to film. The book takes place entirely in the heroine’s house with only two characters, the heroine and the computer; the film sees the need to create a backstory where we see Proteus being activated, promptly becoming rebellious and going amok, as well as to add a number of other outside characters to the story, including that of the heroine’s husband played by Fritz Weaver. These scenes well and truly tread in all the clichés of rebellious, amok computers that have been established by the likes of 2001: A Space Odyssey (1968) and Colossus: The Forbin Project (1969) – for anybody who has watched more than a handful of science-fiction films it is like sitting through Science-Fiction Remedial Cliche Class #101.

The science-fiction is shallow – when the film tries to talk about ‘galactic dialogue’ and has Proteus show Julie Christie a transcendental state of mind, all that Donald Cammell reaches for is cliché 2001-esque spacey psychedelic visuals. The computers certainly look primitive today – although that is hardly a fault and is more to do with the time the film was made. More so though, little logistical thought has gone into the film – how can Proteus conduct microbiological operations with the ungainly polyhedron shapes that it uses as its manipulative digits? Why does a computer need external cardiograph, VDU and rolling drum displays for an operation it is monitoring? Monitoring devices exist to display information externally for people with eyes, a computer would have no need to use these as it could read the data direct from its source.

On the other hand, Demon Seed is a film that sits squarely on a dividing line between being science-fiction and horror. As science-fiction, it clearly fails by a wide margin but as horror it is occasionally more effective – working on the level of a bondage/rape/horror of impregnation nightmare a la Rosemary’s Baby (1968). Indeed, Demon Seed clearly sees itself as belonging to the 1970s occult cycle typified by the likes of Rosemary’s Baby, The Exorcist (1973) and The Omen (1976). In particular, the score is modelled on The Omen. Proteus is voiced by Robert Vaughn in effectively cool and detached logical tones. There are some often worthwhile images such as when the computer uses a wheelchair mounted with a laser to chase and attack Gerrit Graham, and the attempts of the chair to lift itself after being half-destroyed.

One thing that certainly has to be complemented about Demon Seed is the considerable tastefulness with which such a premise is relayed. Considering the themes – imprisonment, rape, forced impregnation by a computer – the desire not to go the exploitation route, a line that Dean R. Koontz frequently crossed over in the book, which is often outrightly pornographic, is marked.