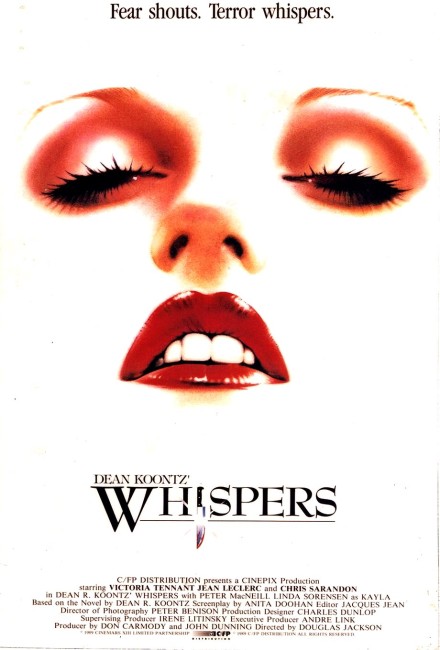 Writer Hilary Thomas is attacked in her apartment by Bruno Clavel, a man she interviewed for one of her books. She shoots him but police dismiss the case because they are unable to find any evidence of the attack. Later, Clavel is found dead but he continues to return to attack Hilary and others. Hilary and police detective Tony Clemenza travel to Clavel’s estate in Lee Valley where they uncover a twisted morass involving Satanism and twins.

Whispers starts out well with an attack on a woman that seems almost supernatural in its total lack of evidence found by the police and then the killer’s apparent return from the dead. These scenes are filled with a number of strange and threatening images – Jean Le Clerc hiding on the roof of Victoria Tennant’s elevator or going to sleep outside her bedroom with masking tape over his mouth. The very strangeness of the mystery holds one to it simply out of the desire of trying to figure out what is going on.

Unfortunately, the film fumbles it – and most of this appears to be Dean R. Koontz’s fault. Dean R. Koontz is regrettably an author of contrivations. His stories only work in term of their intended impact, not when one examines them logically. In Whispers, the build-up and mystery is of no real relevance – the Satanism aspect is a blind, it is only a straight serial killer story with Koontz using the improbable twin angle (whose end revelation is preposterous and unbelievable in the psychology he asks us to believe) to try and fool us into believing it is an occult story.

Of even less relevance is the brief indication of vampirism. Furthermore, after an intriguing opening, Whispers mires down in a routine detective story. All the horror elements are dropped and the story could, for all the difference it makes, be a routine tv cop show investigation.