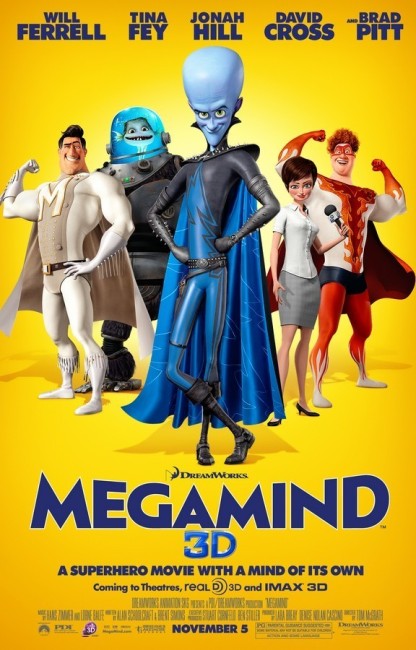 A young blue-skinned child is placed in a spacepod by his parents and sent away from a doomed planet. The spacepod crashes in a prison in Metro City on Earth and the child is raised there, where it chooses the name Megamind. On the way to Earth, Megamind passed an infant child sent in a spacepod from another planet, who crashes on Earth and grows up to become the superhero Metro Man. When all of Megamind’s schemes to be a hero in school go wrong and are overshadowed by Metro Man, he makes the decision to turn to villainy. In the present-day, Megamind’s villainous schemes have all been on a long losing streak up against Metro Man. Megamind abducts reporter Roxanne Ritchi, Metro Man’s wannabe girlfriend, to set a trap for Metro Man and obliterates him in the local observatory using a death ray. Afterwards, Megamind and Roxanne are shocked to find nothing left of Metro Man but his skeleton. Metro City mourns. Megamind soon realises that with nobody to oppose him, he misses Metro Man. Megamind is forced to use his illusion projector to pose as the librarian Bernard, during which he and Roxanne befriend one another. He then injects Roxanne’s cameraman Hal Stewart with a serum that gives him superpowers and trains Hal up with the intention of making him into the superhero Titan. Megamind then realises that he is becoming attracted to Roxanne. As Hal’s superherodom does not quite turn out as expected and Hal turns to villainy, Megamind realises that the only option is for him to become the superhero.

Megamind belongs to a spate of films that came out following the success of Pixar’s The Incredibles (2004) that offer up spoof takes on superheroes, showing them awkwardly trying to deal with everyday domestic situations. More to the point, Megamind comes out a mere four months later the same year as the independently produced and far superior Despicable Me (2010), which similarly charted the life of a super-villain. Both films tread a similar plot arc in throwing the not-so-successful super-villain into a domestic situation (looking after kids, wooing a girl) that then becomes the source of their gradual redemption. Both films also feature the super-villains accompanied by loyal non-human creatures known as Minion(s).

Megamind has clearly been construed as a take on the story of Superman, albeit one wherein Lex Luthor becomes the hero (although with blue skin and oversized bald cranium, Megamind reminds of another Superman villain Brainiac). The film pays surprising homage to both the comic-book and in particular the movie Superman. Megamind’s being launched from a dying planet in a spacepod and landing on Earth is an inverted take on the familiar Superman origin story. Tina Fey’s feisty girl journalist who has a perpetually unfulfilled relationship with the superhero is clearly an analogue of Lois Lane. The plot arc about Metro Man’s death seems surprisingly to be modelled along the lines of DC’s best-selling The Death of Superman (1992-3) story arc – see the film adaptation The Death of Superman (2018) and Reign of the Supermen (2019).

The film also pays unexpected homage to the Christopher Reeve Superman (1978). Tighten’s visit to Roxanne’s apartment and desire to take her on a flight of the city is plainly intended as a version of Superman and Lois’s romantic night flight gone wrong. More to the point, when Megamind adopts an illusion to train Tighten, the voice that Will Ferrell adopts is a clear mimicry of Marlon Brando’s characteristically mumbled delivery and the scenes consciously play on those where Christopher Reeve activates the hologram from his father in the Fortress of Solitude.

I may have enjoyed Megamind more if the delightful Despicable Me were not in recent memory. In which case, Megamind becomes distinctly the lesser. It has some cute moments but ultimately is merely a well-polished act as opposed to something that is genuinely funny. The analogue might be comparing The Incredibles with Superhero Movie (2008) – not that I am saying that Megamind reeks in the same way that Superhero Movie did. One takes the high road of developing its concept out with wit, humour and cleverness; the other is merely stuck down around the level of pastiche and dragging out jokes based on audience familiarity with a body of films that have gone before. For a time it feels like these familiarity jokes are all that Megamind has in its arsenal, while the principal concept that the film hangs on of the comedic life of the super-villain had its originality trumped by Despicable Me.

Certainly, once it manages to wheel its plot set-up into place and gets beyond the business of pastiche, Megamind works enjoyably well. The script has a good deal of fun in the constant reversals of expectation – Megamind forced to become the hero; his replacement hero becoming the bad guy; the traditional superhero deciding he wants out of the game to pursue a career as a musician and so on.

Tom McGrath (with the aid of Guillermo Del Toro on editing) creates some reasonably exciting superheroic and mass destruction battles. It all comes at us in the gratingly ubiquitous new 3D format but this hardly mars things. The usually irritatingly over-the-top Will Ferrell is surprisingly well in control of his performance as the voice of Megamind, while both Tina Fey and Brad Pitt deliver near-perfect performances as Roxanne and Metro Man respectively.