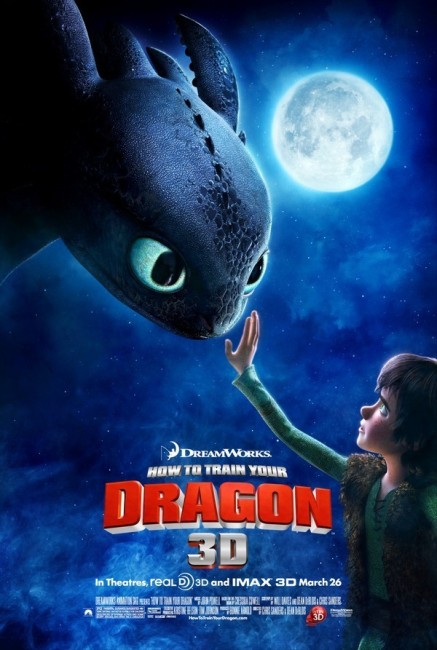 In the Viking village of Berk, Hiccup is the son of the chief Stoick and an apprentice blacksmith. The village is plagued by regular attacks from dragons. Hiccup comes up with various inventions to kill them but his bumbling always ends up causing chaos. Stoick sends Hiccup to class where he is to learn the art of killing dragons. At the same time, Hiccup discovers that one of his devices has trapped a mythic and never before seen Night Fury. However, rather than kill it, Hiccup chooses to free the Night Fury. He later finds it in a valley, unable to fly out because it has a broken tail fin. Hiccup brings food and befriends the Night Fury, naming it Toothless, even making a replacement tail fin for it in the smithy. In befriending Toothless, the things he learns enable him to peacefully defeat the dragons in class. Toothless also lets Hiccup place a harness on his back and fly him. He takes Hiccup to see the dragon’s lair and the fierce super-dragon that the other dragons live in fear of. Hiccup’s success means that he graduates the top of the class and wins the prize – that of killing a dragon – but he no longer wishes to do this. Hearing the fighting, Toothless flies to Hiccup’s aid – only to be captured by the villagers. Hiccup is disgraced by his father for wanting to befriend rather than kill dragons. Stoick then decides to mount an attack on the dragon lair and kill them all.

I felt unenthused by How to Train Your Dragon after watching the trailer. The dragon, which looked like a large black cat, seemed too cute and left one with the impression of a dragon story pitched to audiences in the single digit age group. Nor did the stretched characters do much for me – they seemed too much like something out of 1970s Japanese tv anime. As a result, I went into How to Train Your Dragon with low expectations. Nor did the film do much to change one’s mind as it started. I felt that I was having to fight against the irritably intrusive contemporary colloquialisms and culture references that infect many DreamWorks films – Vikings talking about oh-so-modern things like going on dates, living in their parents’ basements and the like – and other bizarre oddities such as a village of Vikings where all the adults speak with fierce Scottish accents.

However, there gradually came a point where How to Train Your Dragon started to work and eventually became likeable. The film has dumped much of the plot from Cressida Crowell’s book. In the book, everybody in the village flies dragons. The dragon school scenes are in the book but there every young child must capture their own dragon, not have to kill one. Toothless is there but is a tiny, harmless seeming dragon, not a fierce Night Fury. All of the dramatic hooks the film hangs on – of taming rather than fighting the dragons, Hiccup standing up against village expectations of him, his befriending the initially fierce seeming Toothless – do not exist in the book. Indeed, the plot of the film could almost act as a prequel to the events of the book – the end the film goes out on with everyone flying their own dragon is essentially a starting point that the book takes for granted.

On the other hand, the plot that the film creates for itself is a far stronger one than the book had – we go from a boy choosing his dragon companion and they passing through some adventures to a much more dramatic one about a boy befriending a dragon and learning to stand up to his tribe’s warlike insistence on killing the dragons. Certainly, How to Train Your Dragon is ever so calculating a film – the story arc is a classic one that comes with all the struggles and triumphs, the clear cutouts of the rejected downtrodden hero who relies on his intellect and eventually proves himself, as well as a dash of romance with the initially feisty girl. All of these play out in easily predictable arcs. The reversal of expectation to befriend rather than kill the dragons is a very modern one, although the film then has to invent an uber-dragon to threaten humans and dragons alike in order to come up with a sufficiently big climax.

The scenes that work the best are those with Hiccup cautiously befriending Toothless and making fins and harnesses for it. It is here that the film finds its stride. Toothless looks like a big black cat with wings and is far too reminiscent of Stitch in Lilo & Stitch, as DeBlois and Sanders freely admit, but the scenes have a winningly likeable charm. At times, DeBlois and Sanders feel the need to artistically show off. Some of the shots of dragons flying through rock arches, against beautiful sunsets and up into the aurora seem inserted solely to get those gasps of “ahhh” from an audience rather than serve any dramatic purpose. However, the flying scenes do soar and the climax battling the uber-dragon manage to be magnificently exhilarating, even to add a degree of scary violence to largely a child-intended film.