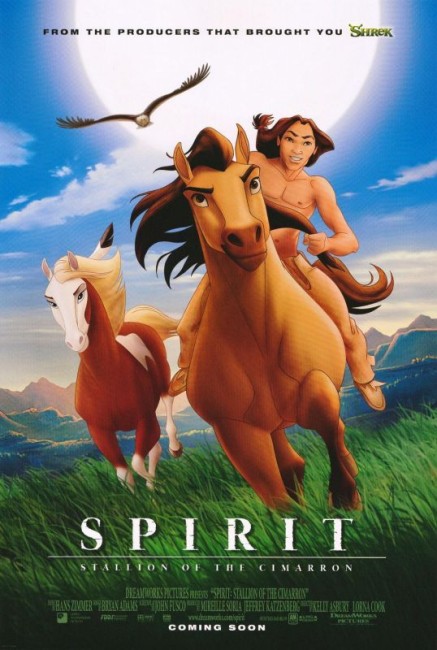 A stallion grows up to be the leader of a herd of wild horses living on the Cimarron plains of the Western frontier. Curiosity draws the stallion to a human encampment. There it is captured and then taken to a fort outpost. It steadfastly defies all attempts to break it. With the aid of Little Creek, a captured Indian boy, it makes an escape. Taken back to the Indian encampment, the stallion equally refuses Little Creek’s gentler attempts to tame him. The stallion then meets and is attracted to the mare Rain and is drawn between her and its desire for freedom.

Spirit: Stallion of the Cimarron comes from DreamWorks SKG, the studio co-founded by Steven Spielberg, former Disney CEO Jeffrey Katzenberg and record magnate David Geffen. In the last few years, DreamWorks have been making great strides in attempting to wrest the animation crown away from Disney.

This approach was taken before in the Australian film The Silver Brumby (1993), which told a story of the inner lives of horses using only narration – and that film came with the added difficulty of being shot in live-action. In The Silver Brumby, the result felt uncomfortably caught halfway between being a dramatic story and an Animal Kingdom documentary. In both films, this approach presents certain difficulties ie. trying to tell a story where you can only describe the plot rather than have the characters talk. Spirit: Stallion of the Cimarron gets around it surprisingly well it in that the animation allows the filmmakers to invest the animals with a great deal of expression.

Spirit: Stallion of the Cimarron is a beautifully animated film. The opening is a particularly breathtaking shot following an eagle across the plains, down through canyons and into the forest accompanied by the animation camera conducting vast three-dimensional swoops that cover the landscape in every direction. It is stunning for the sheer technical virtuosity of showing such three-dimensional sweep in a single shot.

The film has some immensely exciting action sequences – Spirit and Rain being swept over a waterfall, Spirit’s climactic attempt to jump a ravine, and especially a seat-edge sequence where Spirit races down a hillside trying to avoid the path of a tumbling, exploding locomotive. The film is drawn with a bold, confidant dynamism – there is nothing cutsie or twee to it at all. It is a remarkably adult animated film, even if it is sold to young audiences.

Spirit: Stallion of the Cimarron does invariably draw up some simplistic black-and-whites. Most evident is the clear liberal agenda of the 1990s revisionist Western, which has begun to be written through all accounts of the Western frontier and American colonial story beginning with Dances with Wolves (1990) and carrying through Unforgiven (1992) and Disney’s inferior Pocahontas (1995) – one where animals and Indians are good guys, while white men are evil and Western civilisation and progress equals the despoliation of the natural wilderness. [The film is written by John Fusco, best known for Crossroads (1986), Young Guns (1988), Thunderheart (1990) and tv’s Dreamkeeper (2003), who is an adopted brother of the Oglala-Lakota tribe and a breeder of rare American Indian horses].

Spirit: Stallion of the Cimarron is a surprisingly good film. It has a bold, dynamic confidence of storytelling and emotion and lacks in any of the banality, the constant reaching for awe and cutsie relief that has infected so many recent Disney films. Indeed, Spirit: Stallion of the Cimarron shows that DreamWorks have all but managed to steal the animation crown away from Disney, the studio that Spirit producer Jeffrey Katzenberg once headed. While Disney films of recent years have been faltering in quality and most recently in terms of failing to be the runaway box-office sensations they were expected to be, DreamWorks has been steadily making consistently excellent animated films, including the frequently underrated likes of Antz (1998), The Prince of Egypt (1998), The Road to El Dorado (2000), Madagascar (2005) and of course the runaway sensation of Shrek (2001). Indeed, were Pixar – the producers of Toy Story (1955), Monsters, Inc. (2001), Finding Nemo (2003) et al – to suddenly go independent as they have constantly threatened to do, Disney’s animation output would be considerably the lesser.