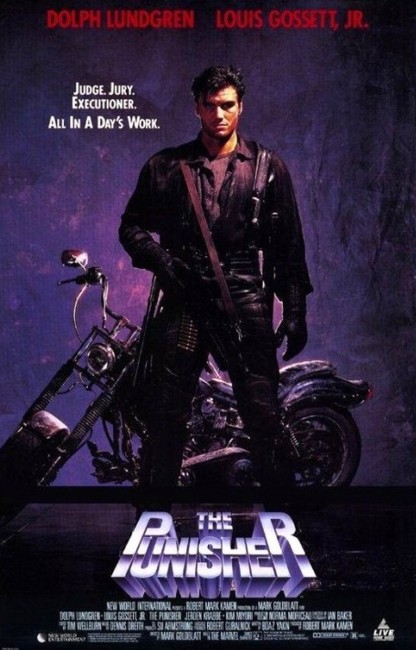 In five years, 125 gangland members have been murdered by a vigilante that the police have nicknamed The Punisher. Detective Jake Berkowitz realises that The Punisher is his former partner Frank Castle. Castle was thought blown up by a Mafia bomb, along with his wife and daughter, but is now exacting grim revenge from a hideout in the sewers. The Yakuza arrive, announcing that they are taking over control of crime in the city. Mafia head Gianni Franco refuses and so Yakuza head Lady Idiko Tanaka starts abducting the children of The Mafia. Castle becomes up caught between eliminating both the Yakuza and the Mafia and the police hunt for him.

The Punisher is a film based on Marvel Comics’ The Punisher. The Punisher is an ultra-violent vigilante character who was originally created in 1974 as a nemesis for Spider-Man. However, the character gained in popularity until the point that he gained his own comic-book in 1986. Thought initially unpopular with Marvel executives, who found the notion of a violent and murderous vigilante unlikeable, the character has since remained at the forefront of the Marvel line in terms of popularity.

Into the bargain, everything is played absurdly tongue-in-cheek. The dialogue comes rather wittily – “What do you call 125 murders in five years?” Louis Gossett asks Dolph Lundgren’s Castle. “Work in progress,” is the taciturn reply. Yakuza head Kim Miyori taunts the Mafia – “While your ancestors were still screwing sheep, we were the lords of Asia.” And there is the wonderful moment where the Mafia waiting for a meeting in a restaurant suddenly find that every single other diner in the restaurant is a waiting assassin.

Being a post-Batman (1989) film, The Punisher is naturally made with a dark moody psychological undertow. Indeed, the extent to which the film takes to the homicidal vigilante thing does makes one wonder about the comic-book fans that go for this. The most potent part of the film is when it starts delving into the psychology of vigilantism and offers up striking images of Dolph Lundgren sitting naked before photos of his family in his sewer lair, begging God to give him a sign if what he is doing is wrong. Or the scene where Lundgren faces off with the Mafia boss’s son (Brian Rooney), giving him the opportunity to kill him, and telling him to be a good boy or else he will have to come after him.

While you can quibble with an incarnation of The Punisher minus his distinctive skull-emblazoned costume, Dolph Lundgren, decked out in black leather, motorcycle boots, stubble and decidedly unhealthy drugged-out red eyes, is rather well suited to the part. Indeed, Dolph Lundgren is one B movie action who has actually demonstrated an ability to act. That said, the best performance in the film is the wonderfully glacial, haughty and equally tongue-in-cheek one delivered by Kim Miyori.

The Punisher was later revived on screen in The Punisher (2004) starring Thomas Jane as Frank Castle. Although the 2004 film was much bigger-budgeted and adhered much more closely to the comic-book in terms of the character’s costume, this version here is by the far more enjoyable both in terms of its sense of capturing the comic-book’s spirit and in terms of the dark psychology. The 2004 film received a superior sequel with Punisher: War Zone (2008) starring Ray Stevenson. The Punisher then appeared in the second season of the tv series Daredevil (2015-8) played by Jon Bernthal. This was subsequently spun out in his own tv series with The Punisher (2017-9). Frank Castle also makes a cameo appearance in the animated Iron Man: Rise of Technovore (2013) voiced by Norman Reedus.