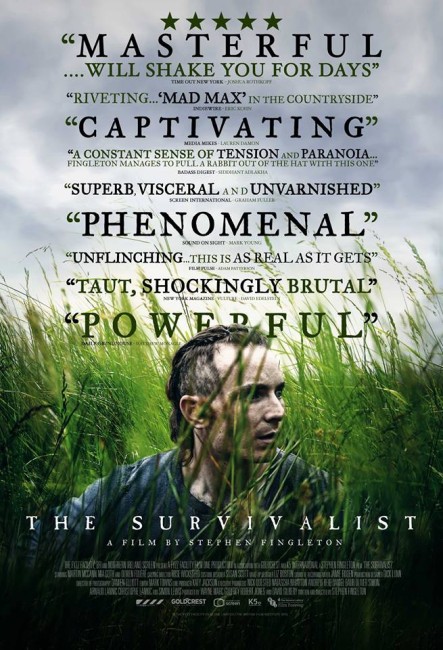 It is after civilisation has collapsed due to the end of oil. A man lives on his own in a hut in the forest, keeping a small garden and maintaining the basics of survival with what he has. One day, he is interrupted by the arrival of a woman Kathryn and her daughter Milja who offer to let him have sex with Milja in return for a meal. The next morning, they plead to stay on and do so despite considerable distrust between both parties. The women however plan to steal the survivalist’s shotgun when they can get an opportunity. Trust is engendered when another man tries to snatch Milja and the survivalist kills him to save her, being badly wounded in the process. The women nurse him back to health. However, a raid by an armed party steals most of their supplies. With a dwindling amount of food left and not enough to go around the three of them, the situation turns desperate.

The Survivalist is a post-holocaust film that represents a directorial debut for British director Stephen Fingleton. The film gained considerable acclaim during its run throughout various festivals in 2015.

The Survivalist falls into a fad for harshly realistic post-holocaust survival stories that we have seen in recent years, beginning with The Road (2009), which made a move away from the demolition derbies in the ruins of civilisation that had dominated the genre since Mad Max 2 (1981) to something grimly down-to-earth.

The Survivalist could not be less of a Mad Max-styled action film. It is one that takes place in a minimum of dialogue between the characters, exists more in the silences. Details about what happened to the world have been eliminated from the show, apart from the opening animated graph that connects the collapse of civilisation to the end of oil. Indeed, bar the end scene, we see nothing of the rest of the world beyond the man’s hut and immediate environs. Much of the early section is a dull minute observation of Martin McCann’s life in the cabin as he tends his garden, prepares his meagre supplies and the like. Even with the entrance of the two women, it still remains a film confined to a one-room cabin and its attending garden.

Despite this, the film becomes utterly gripping. The stage is so completely bared that the dramas are filled with a rawness of emotion, nothing that can be considered cliche drama. There are extraordinary pieces like where we see we are in a world where a mother offering her daughter for sex is bartering power, where survival can be brought down to a mere two shotgun shells, or the grimness of the scene where Mia Goth attempts to give herself an abortion with a wire coat hanger.

The climactic drama where Mia Goth and Olwen Fouere plan to poison Martin McCann and then the abrupt turning of the tables is rivetingly raw drama, followed by the harsh terseness of the scene where Martin McCann follows Olwen Fouere and she tells him not to waste his shotgun shells but asks to have one last cigarette – not to mention the savage irony of his returning only to find they finally have caught a rabbit in the trap.

Stephen Finglelton had earlier made the essentials of The Survivalist with the 16-minute short film Magpie (2014). This was credited as a prequel, although is more of a trial version of this film, featuring Martin McCann as a lone hunter and Olivia Williams and Mia Goth as the mother and daughter who turn the tables on him. This features both McCann and Goth, as well as other elements of continuity such as the same photo of a girl that he keeps, although is not a prequel given that McCann’s character is killed at the end of that film.