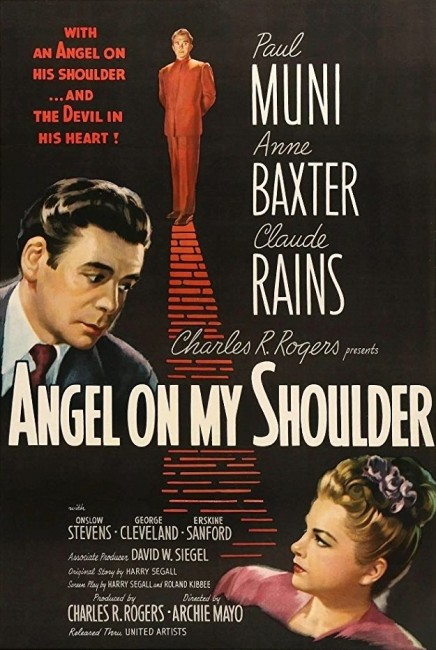 Just released from jail, mobster Eddie Kagle is met by his second-in-command Smiley Williams who promptly shoots him. Eddie come around to find himself in Hell. Nick, the boss of the outfit, thinks he can get the upper hand in his ongoing battle with the forces above when he finds that Eddie is a dead ringer for the respectable Judge Frederick Parker. Instilling Eddie in the judge’s body, Nick sets about using him to ruin the judge’s reputation and cause malice. However, when Eddie meets and falls for the judge’s e Barbara Foster, he begins to doubt the worth of Nick’s mission.

This was the era of WWII so a preponderance of films in which people are gently reassured of the afterlife was no doubt of great comfort to those people whose family members and loved ones were being killed abroad. These light fantasy films were gentle assurances that were denominationally non-specific and certainly almost never dealt in issues like damnation and judgment – in Heaven Can Wait, for example, The Devil proves to be a nice guy who pardons a cad anyway.

Amid this, Angel on My Shoulder is notable as being one of the few films in this genre to even mention Hell or The Devil. Indeed Angel on My Shoulder can almost be seen as a dark take on Here Comes Mr Jordan – where Mr Jordan had an angel accompanying a man who is prematurely taken out of his body due to a Heavenly bureaucratic error on a search for a new body so that he can return to his everyday life, Angel on My Shoulder has The Devil accompanying a murdered hood on a search for a new body so that he might return and create mayhem and deviltry. (With some kind of weird symmetry, Claude Rains plays both Mr Jordan and The Devil in either film).

In the film, Hell is depicted as a fascinatingly torrid place, all shot in exaggerated shadow lighting that suggests an intriguing collaboration between the eschatological fantasy and film noir. Amidst this, Claude Rains maintains a wonderfully droll, sinister presence – his appearances always come emphasised with subtle lighting effects.

Paul Muni gives a unique performance. He is like a silent movie actor villain, all physically contorted and melodramatically overwrought menace. There is some fine humour to the scenes contrasting the rough-hewn mobster with the judge’s conservative lifestyle – his reaction to the judge’s dress sense, or when his automatic assumption is to crack the judge’s safe rather than open it to get money, and his e’s aghast reaction to his tough guy speak. His softening – the way we see his rough, physically twisted face straighten out – makes for a touching arc and the ending the film arrives at is quite sad.

The film was remade as a tv movie Angel on My Shoulder (1980) with Peter Strauss in the Paul Muni part and Richard Kiley as Nick.

Angel on My Shoulder was the final film of Archie Mayo, a director who had a long career going back to the heyday of the silent era in the 1910s. Mayo made many dramas. His sole other film of interest here is Svengali (1931) with John Barrymore as an evil hypnotist.