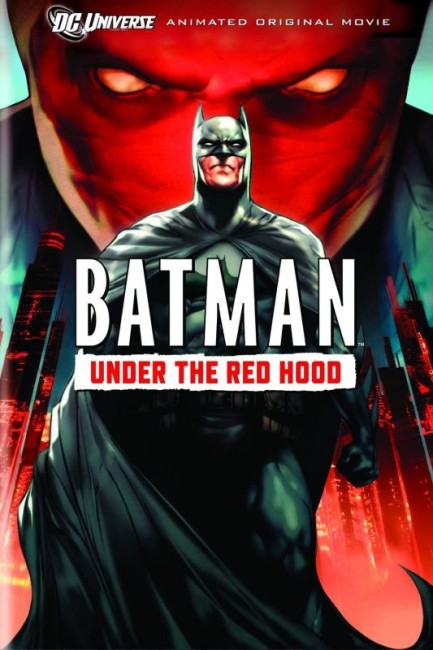 In Bosnia, The Joker has abducted Jason Todd, the second Robin, and brutally tortures him. Batman races to save Jason but is unable to do so before The Joker blows up a warehouse, leaving Jason trapped inside to be killed. Five years later, Gotham City’s underworld faces the new threat of a masked figure known only as Red Hood who unites the drug lords under his command, using ruthless tactics to wipe out all opposition. This angers the existing crime kingpin known as Black Mask and a turf war begins between the two. Caught up in the midst of this, Batman finds something strangely familiar about Red Hood’s combat moves. Analysis of Red Hood’s spilt blood reveals the impossible – that he would appear to be a still alive Jason.

Batman: Under the Red Hood is based on Under the Hood, a twelve-story arc that ran in the Batman comic-book between 2005 and 2006. This was a sequel to A Death in the Family (1988-9), a three-story arc that was one of the most celebrated Batman stories of the era. In 1983, Dick Grayson, the most famous Robin, was promoted to the role of Nightwing and Jason Todd was introduced as the second Robin. The initial version of Jason Todd was very similar to Dick Grayson – the son of circus performers who was adopted by Bruce Wayne after his parents were killed by a super-villain. Following the continuity revamp in Crisis on Infinite Earths in 1986, Jason Todd was given a new origin (recapped in a flashback here) as an orphan street kid who was discovered by Batman after trying to steal the tires off the Batmobile. Jason Todd proved unpopular with fans and so DC took the novel step of setting up an 0900 number so that fans could call in and vote whether he should be killed off. The vote was in the affirmative and this occurred with A Death in the Family written by Judd Winick. In Under the Hood, Winick brought Jason Todd back to life in a plot that closely follows the story of the film here, revealing how he was resurrected by Ra’s al Ghul and, with his mind not the same anymore, created a new identity as the villain Red Hood.

Surprisingly, rather than choose to adapt A Death in the Family, as you might expect given its stature as a classic Batman story, Bruce Timm and associates instead choose to adapt Under the Hood. The essence of A Death in the Family is encapsulated in the opening scenes here where The Joker captures and kills Jason in the Middle East. Judd Winick also turns in the script for the film. The director of Batman: Under the Red Hood is Brandon Vietti who previously co-directed the first of the DC Universe Animated Original Movies Superman: Doomsday, as well as episodes of other superhero-based tv series such as Spiderman (2003), The Batman (2004-8), Legion of Superheroes (2006-8) and Batman: The Brave and the Bold (2008-11).

Batman: Under the Red Hood quickly emerges as the best of the animated Batman films to date. For one, it is an animated film that is made more for adults than for children. Judd Winick offers up some extremely strong writing, particularly the scenes near the end where Jason creates a situation where Batman is forced to kill either him or The Joker where Batman’s superb reply is that he doesn’t want to give into the temptation to do so because he could never turn back. It is an often violent film – we get to see The Joker beating Robin/Jason Todd nearly to death in the opening scenes; while elsewhere a hood is incinerated with his own molotov cocktail and Red Hood splatters the head of one of the Fearsome Hand of Fear against a wall. The dvd release gives Under the Red Hood a much darker edge that Timm and co were forced to hold back on when Batman was on tv.

Brandon Vietti creates some exhilarating action scenes. Batman is introduced in a great sequence jumping aboard and causing a truck to crash in the docklands, followed by the emergence of the Amazo android, Batman being joined by a cockily flip Nightwing and they fighting Amazo on and around the cranes and containers and up into the air. This is followed by a sequence with Batman pursuing Red Hood’s car through the streets in the Batwing, even down a traffic tunnel with a winch attached to the car, and then into a factory where Red Hood explodes the vats of chemicals, leaving Batman to almost be incinerated as the building blows up.

There is another fine sequence pursuing Red Hood from a helicopter that falls down the side of a building before it is caught by a Batarang, with Batman then pursuing Red Hood through the skies, around building ledges, with they bouncing off zeppelins, crashing through skylights and down into a train station. If you imagined any of these in a live-action Batman film, they would be the kick-ass action scenarios to end all superhero action scenes.

Batman: Under the Red Hood chooses to go with a different voice cast than has been employed in any of the other animated films or tv series to date. Kevin Conroy nailed Batman perfectly throughout the various series and films but has been replaced by a less distinctive Bruce Greenwood here. (Greenwood did go on to play Batman/Bruce Wayne in the animated tv series Young Justice (2010-3) featuring the sidekicks of popular DC superheroes as children). Greenwood does the grim tightly drawn Batman okay and I suppose the best I can say about Greenwood is that I did not particularly have any strong feelings one way or the other about his voicing of the part. When it comes to the Bruce Timm films and tv series, the distinctive Joker has always been Mark Hamill’s essayal of the role, which came with just the right degree of insane glee. John DiMaggio fails to nail the same thing here – he plays it more like a macho actor puffing out his chest and posturing at being a villain.