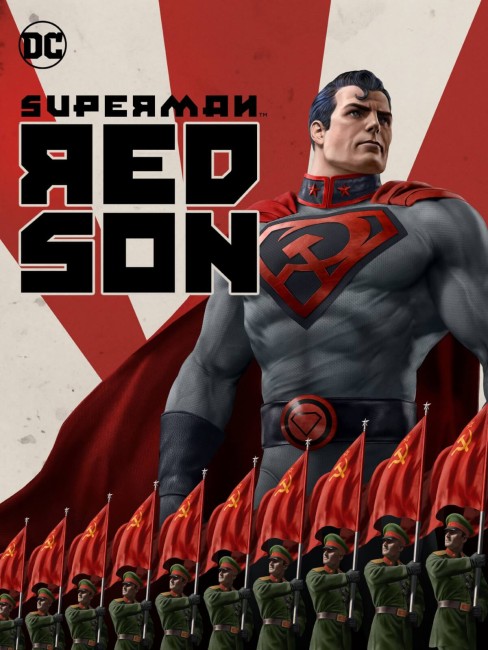 In 1955, The US becomes aware that the Soviet Union has a super-powered individual they call Superman. Superman is regarded as a son by Premier Joseph Stalin. The existence of Superman piques the curiosity of top US scientist Lex Luthor. When a falling satellite threatens Metropolis, Superman appears and stops it. He announces to the crowds that he only wants peace between the two countries. Luthor’s wife, journalist Lois Lane, is present and challenges Superman to an interview. Afterwards, she hands him a dossier of information on all the murders that Stalin has conducted. Superman goes and finds out the truth Stalin has hidden from him. He responds by killing Stalin. In the aftermath, Superman is appointed the new premier and goes on to transform the Soviet Union into a land of prosperity and a paragon of Communist ideal. Luthor regards Superman as a threat and creates Superior Man, a clone copy designed to stand up to him, but Superman defeats it. Superman also defeats the invading artificial intelligence Brainiac and then harnesses its technology to create a series of brain control devices to recondition dissidents. After the assassination of John F. Kennedy, Luthor becomes the US President. This brings he and Superman and the two countries that they rule into conflict.

Millar’s comic-books have led to a number of popular film adaptations. Kick-Ass was filmed by Matthew Vaughn with Kick-Ass (2010) and its sequel Kick-Ass 2 (2013) and Vaughn then went on to adapt Kingsman: The Secret Service (2015), which has led to sequels. Elsewhere there was the James McAvoy-Angelina Jolie Wanted (2008), although that bore little resemblance to Millar’s original work. The Ultimates also formed the basis of the two animated Marvel films Ultimate Avengers (2006) and Ultimate Avengers II (2006).

With Superman: Red Son, Millar created a What If story that asked what would happen if the Kryptonian capsule containing the infant Superman had landed on a farming collective in the Soviet Union instead of Smallville and Superman was raised to become a paragon of Communist virtue instead of All-American. The comic-book gained considerable acclaim during its day and is considered a classic.

Superman: Red Son was one of the titles in DC’s Elseworlds imprint, which consist of either alternate history retellings of familiar DC characters and storylines, or stories that mix up the characters – where we get gender-reversed versions of Superman, Batman, Wonder Woman – or place them into different milieus such as rewriting them as pirates, vampires, in the Victorian Era, The American Civil War or the French Revolution, or where they are reconceived in terms of film noir, German Expressionism, the Arthurian legends, fantasy worlds where they are magicians etc. The Elseworlds idea has started to creep onto film with the previous adaptation of Batman: Gotham By Gaslight (2018), the very first of the Elseworlds titles, while there have been other works that are not adapted from graphic novels but use the same basic idea such as Justice League: Crisis on Two Earths (2010) and Batman Ninja (2018).

The Red Son alternate history has occasionally crept into other DC storylines. It has made appearances on the screen before this. There was the Keeping Up With the Kryptonians (2018) episode of the animated Justice League Action where Mr Mxyzptlk shows Superman and Supergirl an alternate timeline where they are raised in the Soviet Union. The tv series Supergirl (2014- ) also had a seven episode story arc in its fourth season where a clone of Supergirl grows up in the Soviet Union as Red Daughter.

The immediate disappointment is that the film version of Superman: Red Son has been placed in the hands of Sam Liu, who is not one of the best among the crop of directors working on the DC Universe Original Animated Films, despite being the most prolific. The film has made changes to Mark Millar’s story, mostly in order to place more of an emphasis on superheroic action and big dramatics. On the screen, Svetlana (the Soviet equivalent of Lana Lang – Lana Lazarenko in Millar’s original) has very different role. Perhaps the most drastic change is that the film has Superman killing Joseph Stalin with his heat vision – which comes as quite a jolt given how people reacted badly to the idea of Superman killing in Man of Steel (2013) – rather than Stalin’s death by poison. Not quite clear in the film version is that the attacks by Brainiac and the Soviet Batman were all part of Lex Luthor’s plans to stop Superman whereas here they merely becomes pieces of side action.

All of that said, the film keeps general good faith to the overall story of the graphic novel and all the essential pieces are there from the rivalry between Superman and Luthor played out on an international stage to the winding in of parallel versions of world history. There are also interesting alternate takes on familiar DC characters like Wonder Woman, Batman, Green Lantern, Jimmy Olsen, Bizarro Superman and even a Soviet equivalent of the bottle city of Kandor, which come in often quite different ways to what we are used to.

Sam Liu’s superheroic action is average, nothing spectacular. However, what does make Red Son work reasonably well is the script adaptation by J.M. DeMatteis – a regular comic-book writer who has also worked on the scripts for other DC Universe Original Animated Films. This is one US production – and an animated one ostensibly for children, no less – that engages in the debate between Communism and Capitalism with neither seen in a necessarily favourable light. What I liked is how we see Superman standing up for the Communist ideal – with the underlying implication that that is what best embodies his natural virtue – and that Superior Man is the warped embodiment of capitalist idea, he spouting the classic Superman line about standing for “Truth, Justice and the American Way” at one point.

In that most superhero comic-books are American, we have the oddity of vast world-changing events occurring in the real world – major wars and disasters – but these having to be incorporated into comic-book canon as though they had happened with no change whereas in reality had there been superheroes they could easily have changed the course of events. This was something that Alan Moore’s Watchmen dealt with. Red Son does this too where its’ alternate history take allows world events to be considerably changed – Superman ending the Korean War in three hours, knocking down the Berlin Wall after it has been constructed.