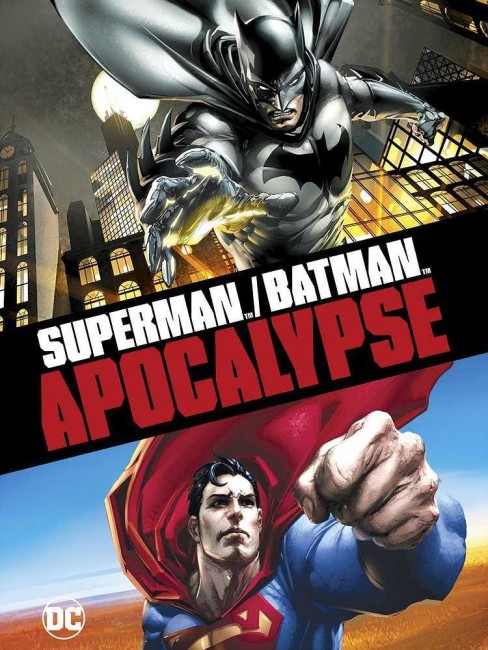 Batman investigates as a capsule from space comes down in Gotham Harbour. A girl with superpowers emerges and runs amok before Batman stops her with Superman’s aid. Superman is surprised to find the girl speaks Kryptonian. She reveals that she is his cousin Kara Zor-el. He is overjoyed and tries to introduce her to a regular life. However, Kara’s superpowers soon prove to be uncontrolled. Wonder Woman arrives to insist that Kara be taken to Paradise Island for training in how to control her powers. Darkesid, ruler of the planet Apokolips, sends his parademons to Paradise Island to snatch Kara. Superman, Batman, Wonder Woman and Big Barda, one of Darkesid’s former Furies, head to Apokolips to stop Darkesid who plans to make Kara into his chief lieutenant.

Superman & Batman: Apocalypse is more of a Supergirl film than it is a Batman or Superman film. It was called Superman & Batman: Apocalypse for the simple reason that Superman/Batman: Public Enemies had been a success. By contrast, Wonder Woman was not and the reasoning went that female-fronted animated superhero films were a low seller and so it was sold as a follow-on to Public Enemies. The trailer (listed below), for instance, doesn’t even mention Supergirl.

The film serves to introduce Supergirl to the DC Animated Universe. Introduced in 1959, Supergirl was intended as a variation on Superman that could be sold to teenage girls. She enjoyed her own comic-book for a number of years and had appeared in the live-action film Supergirl (1984) but was then written out of official DC continuity in the Crisis on Infinite Earths (1986) continuity reshuffle. She subsequently floated around making sort of appearances before being officially reintroduced in The Supergirl from Krypton (2004), a six story arc in Superman/Batman that forms the basis of this film. Apocalypse of course came out four years before the substantial success of the tv series Supergirl (2014- ) with Melissa Benoist, which gave Supergirl a renewed life. The film here offers a radical take on Supergirl, showing her as rebellious, her powers as uncontrollable and she at one point being seduced over to the darkness by Darkseid. (The film also reintroduces Krypto the Super Dog).

The film also offers the first screen depiction of Jack Kirby’s Fourth World saga. First appearing in the 1970, this consists of a series of linked characters and titles concerning Orion of the New Gods, The Forever People and Mr Miracle and set around the backdrop of two planets, New Genesis and Apokolips, that had been racked by war and of the fight to stop the villainous Darkseid obtaining the Anti-Life Equation. As with all other versions of the Fourth World on screen – Justice League: Gods and Monsters, Justice League Dark: Apokolips War and Zack Snyder’s Justice League (2021) – Kirby’s creation has been stripped to bones that are picked clean of all their colour. Here we get a Darkseid who looks very similar to his comic-page counterpart and is well voiced by Andre Braugher and we visit Apokolips (although there is no mention made of New Genesis). The only other Fourth World characters that we get are Granny Goodness and Mr Miracle’s wife Big Barda.

The film does try to create a continuity of sorts among the DC Universe Original Animated Films, which frequently are intended as standalone films unconcerned for connection with one another. Superman wonders if the parademons are based on Doomsday recalling his battle in Superman: Doomsday, while reference is made to President Lex Luthor’s impeachment at the end of Public Enemies. Furthermore, the character of Supergirl as introduced here and was continued in the subsequent Superman: Unbound, which can be considered a sequel.

Lauren Montgomery was one of the great underrated voices from DC Universe. She made Green Lantern: First Flight, Wonder Woman, Justice League: Doom and co-directed several others and then just vanished after 2012. She has been an occasional producer on other animated tv series. Most recently, she has been credited doing storyboard work on various other DC Universe films, which surely seems a major comedown from a point when she was solo director.

There is something massively exciting to the way Lauren Montgomery directs animated action, something that successors that came after her such as Jay Oliva and Sam Liu (who is credited as art director here) lack in their conveyor belt approach. She creates some epic scenes with the battle with the parademons on Paradise Island and the tanks on Apokolips. The climactic scenes between Superman, Supergirl and Darkseid, which inadvertently demolish most of the Kents’ farm, must count as some of the most exciting superheroic action scenes in any DC Universe Original Animated Movie. It is the series at the peak of its game. It shows just what the DC Universe Original Animated Movies had lost by the mid-2010s under Oliva and Liu and all the more example why Montgomery should be employed again.