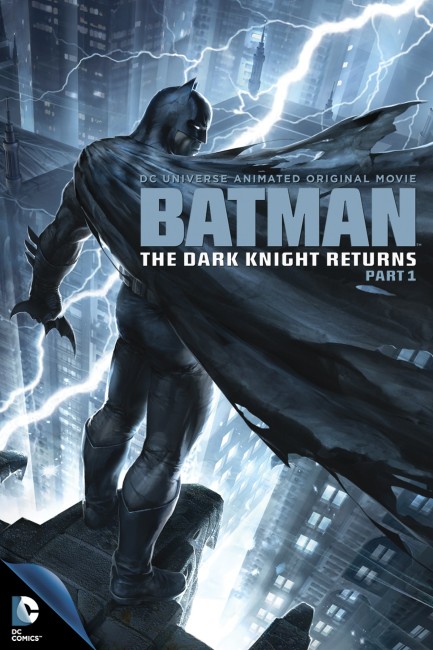 It is ten years since Gotham City has seen Batman and the city has descended into lawlessness. Bruce Wayne hung up the Batman cape after the death of Jason Todd. After seeing news reports about the Mutant Gang conducting acts of murder and mayhem on the streets, the aging Bruce is inspired to put the Batman costume on and go back into action. At the same time, Harvey Dent is released from Arkham Asylum, having undergone surgery to make his face whole, but quickly disappears and begins to conduct acts of crime once again. As Batman steps into tackle the Mutant Gang, his return causes controversy with some in the media calling for him to be stopped as a dangerous vigilante. He gains unexpected support from thirteen-year-old Cassie Kelly after saving her from a Mutant Gang attack. She dons a bought costume and decides to become the new Robin.

Most of the DC Universe Original Animated Movies adapt popular standalone graphic novels. In this case, Bruce Timm and co have turned to what is the arguably the most famous graphic novel ever written, Frank Miller’s The Dark Knight Returns (1986). At the time that he wrote The Dark Knight Returns, Frank Miller was a relative unknown working as an artist/writer at DC and Marvel on various Batman Superman, and Spider-Man titles, as well as creating the original DC series Ronin (1983-4). Miller had gained a name for his major revamping of Marvel’s Daredevil, wherein he introduced many essential aspects of the modern character such as Bullseye and the love interest Elektra. Miller then published the four issue The Dark Knight Returns, which immediately became a hit that revolutionised the graphic novel industry. All of the dark, brooding and psychologically complex vigilante superheroes of the modern era draw themselves from The Dark Knight Returns in one way or another. Ahead for Miller would be other classic independent works like Give Me Liberty (1990), Hard-Boiled (1990), Sin City (1991-2), Big Guy and Rusty the Robot (1996) and 300 (1998). (A listing of Frank Miller’s film work and adaptations is at the bottom of the page).

Having first undertaken the task of adapting Miller with Batman: Year One, Bruce Timm and co now conduct the daunting task of broaching The Dark Knight Returns and split the adaptation into a two-parter. Part of one regards this with a certain cynicism in that it is not dissimilar to a bunch of other franchises of late that have decided to tell stories that cover more than one film – see the likes of Harry Potter and the Deathly Hallows Part 1 (2010) and Harry Potter and the Deathly Hallows Part 2 (2011), Breaking Dawn Part 1 (2011) and Breaking Dawn Part Two (2012), or The Hobbit: An Unexpected Journey (2012), The Hobbit: The Desolation of Smaug (2013) and The Hobbit: The Battle of the Five Armies (2014), even the three-part adaptation of Atlas Shrugged (1957) – where the motivating factor seems more commerce than a desire to be faithful to the source material.

Batman: The Dark Knight Returns Part I certainly remains very faithful to the original graphic novel. This is both commendable and something that proves the film’s curse. One awkward thing is that the film keeps the same implied timeframe that the original graphic novel did where Miller was writing in the mid-1980s and the story seemed to be set in the 1990s. The film retains this but is also impliedly contemporary in terms of designs but confusingly has Commissioner Gordon an adult at around the time of Pearl Harbor and a flashback with the young Bruce Wayne attending The Mark of Zorro (1940), which would make Commissioner Gordon only about to retire from the force in his nineties and Bruce going into action now in his late seventies.

The Frank Miller graphic novels tend to place action in a backseat and give a frontseat to character. The action element has always been one of the best aspects of the Bruce Timm adaptations but here this is held back on – quite possibly because the big dramatics of The Dark Knight Returns are all due to occur in Part 2 that has a nuclear war and a climactic showdown between Batman and Superman. Here there are some well-staged scenes with Batman taking on The Mutants with a tank version of the Batmobile at The Dump and a climactic showdown in hand-to-hand combat with the Mutant Leader. Nevertheless, there is the feeling that the big action scenes the film should have are being held back. The film also lacks a substantial villainy – The Joker makes his return in Part 2; this film has Two-Face but his role that is peripheral to the main action; and the only nemesis we have is the substantially less interesting one of the brutish Mutant Gang Leader. Meanwhile, the new Robin is a character that only just starts to get interesting as the film ends.

The film goes with an entirely new voice cast, using actors that are new to the DC Universe Original Animated Movie adaptations. Peter Weller, known for genre roles such as The Adventures of Buckaroo Banzai: Across the 8th Dimension (1984), RoboCop (1987) and Naked Lunch (1991), plays the part of Batman, although Weller’s customary laidback delivery gives Bruce/Batman too much of a Midwestern drawl. The characters are drawn fairly much along the standard lines they have been incarnated in all of the other Timm Batman films. Noticeably, Batman becomes even more stylised to the point his face is like a single facial block.

The Dark Knight Returns is a classic graphic novel but one cannot quite say the same about Batman: The Dark Knight Returns Part I. It is a good but not necessarily a great film. The reasons for this are twofold. Firstly, one is watching one half of an adaptation – in other words, an incomplete story – and having to make judgements based on that. The other is that it is almost impossible to replicate how original and groundbreaking The Dark Knight Returns was in 1986. There Frank Miller essentially created the dark, grim comic-book vigilante by focusing on the psychology and taking it into dark recesses. This approach was promptly borrowed by Tim Burton in Batman (1989) and Batman Returns (1992) and then with Christopher Nolan in Batman Begins (2005), The Dark Knight (2008) and The Dark Knight Rises (2012), not to mention the other Bruce Timm animated films and tv series, such that it has become an integral aspect of any portrayal of Batman and almost any modern superhero. The film focuses much on the regarding of Batman as a vigilante and showcases talking head tv cutaways debating the issue – while these were groundbreaking ideas at the time, nowadays they seem simply part of the Batman mythos to the point that it is no longer remarkable.

Director Jay Oliva and all those present returned with Batman: The Dark Knight Returns Part II (2013).