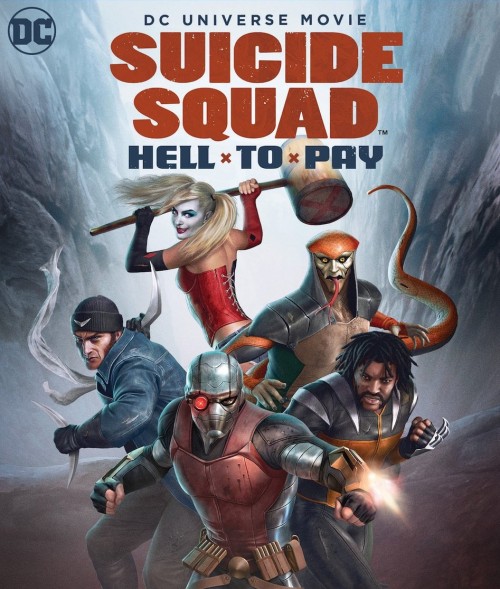 Deadshot, Harley Quinn, Captain Boomerang, Killer Frost, Copperhead and Bronze Tiger are recruited by Amanda Waller to form Task Force X, informally known as Suicide Squad. They will earn time off their prison sentences if they are successful in their mission, while explosive devices are implanted in their necks to ensure cooperation. Their orders are to find Maxum Steel and retrieve a card he possesses. They find Steel working as a stripper in Las Vegas. Steel explains that he was granted a magical helmet that allowed him to become the sorcerer hero Doctor Fate. In the collection of magical artifacts he inherited was a card that allows anybody holding it when they die to go straight to Heaven. Waller has been diagnosed with cancer and is seeking to possess the card. As they seek the card, the Squad face off against two another teams, one made up of Professor Zoom, Silver Banshee and Blockbuster, and a further team consisting of Vandal Savage’s daughter Scandal and her lover Knockout, who are all seeking to obtain possession of the card.

Hell to Pay is being billed as the first Suicide Squad film in the DC Universe Original Animated Films, although this is untrue – they had previously appeared in Batman: Assault on Arkham, although there they were not considered well known enough to have top-billing at that point and the film was instead sold as a Batman film. Hell to Pay of course comes out after the highly successful live-action Suicide Squad (2016). This builds on that film and stays with its main players – Deadshot, Amanda Waller, Captain Boomerang, and Harley Quinn, even though she was never a member of Suicide Squad in the comic-book. Added to this however are a great many other Suicide Squad members from the comic-book page, including Blockbuster, Bronze Tiger, Copperhead, Killer Frost, Punch and Jewelee, and Count Vertigo, not to mention quite a number of other super-villains present who have no Squad association.

Naturally the number of characters running around on screen – two different incarnations of Suicide Squad, one team seen in the prologue and then the main one introduced shortly after, plus two different teams of villains pursuing them – leads for a very busy film where it becomes difficult to keep track of who is who. I was very confused about what I assumed was The Joker and Harley running around during the prologue scenes, wielding a green crystal as an energy weapon and employing flying shoes, before being killed – only to later find it was an entirely different duo of villains Punch and Jewelee. The resemblance in the costuming, right down to even having someone voice Jewelee with a high-pitched register as most Harley characterisations do, proves entirely confusing.

It has become increasingly evident as you watch each successive DC Universe Original Animated Film that the filmmakers have been itching to get away from the kid’s entertainment efforts that the films are sold as and create something more adult. The occasional sexual reference or joke aimed at the grown-ups will slide by as though the production team have been daring themselves to see what they can get away with. This reached a point of eye-opening outrageousness with Batman and Harley Quinn with Harley seducing Robin and making jokes about her vibrator and hits a peak with Hell to Pay, which received an R-rating.