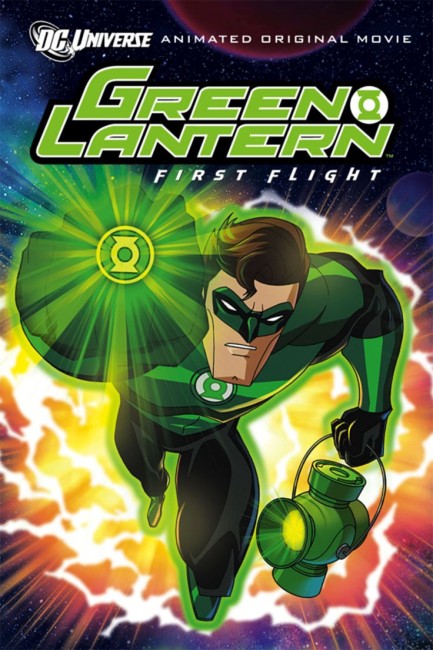 Test pilot Hal Jordan is in a flight simulator when the entire simulator is abruptly lifted up and whisked away into the desert to the scene of a spaceship wreck. There Hal meets the alien Abin Sur who bequeaths Hal a Green Lantern ring before dying, having decided he is the one worthy bearer. Hal discovers that with the ring he is able to manifest any object or energy with his will alone. Soon after, various other aliens, all wearing the Green Lantern ring and uniform, arrive and take Hal to meet the Guardians of Oa at the centre of the universe. The Guardians have existed since the beginning of time and have created the Green Lantern rings, which are powered by a giant lantern on Oa and worn by those who are chosen as worthy to police the universe. Some dubiousness is cast on a human inheriting the ring but Sinestro, one of the top Green Lanterns, agrees to coach Hal in its proper use. Sinestro takes Hal with him as he sets out to track down Kanjar Ro, the intergalactic criminal responsible for Abin Sur’s death. Sinestro expresses disagreement with the Guardians’ methods but Hal sees that he has become too ruthless in his methods and steps in to stop Sinestro torturing an informant. They track Kanjar Ro down on a space station but there Sinestro, who has secretly been collaborating with Kanjar Ro, kills him and leaves the blame placed on Hal. The Guardians strip Hal of his ring. Hal suspects something is going on and sets out to stop Sinestro as he obtains the Yellow Element that was sought by Kanjar Ro. Getting the Yellow Element rebuilt into a lantern by the Weaponers of Qward, Sinestro now becomes the Yellow Lantern and sets out to bring down the Guardians and the Green Lantern Corps.

Green Lantern is one of the top superheroes in the DC Comics pantheon. The original Green Lantern appeared in All-American Comics in a run that lasted from 1940 until 1949. There Green Lantern was engineer Alan Scott who wore a green and orange caped and masked outfit. This Green Lantern fought evil with a ring that was powered by a magic lantern and his only vulnerable was to wood. Later variations of DC canon relegated Alan Scott to the Earth II/Justice Society equivalent of Green Lantern. A decade later, Green Lantern underwent revision and a new character was created in test pilot Hal Jordan, who first appeared in Showcase #22 in 1959, before gaining his own titled comic-book in 1960. The magic lantern and vulnerability to wood ideas were abandoned and the ring’s abilities greatly expanded. All the distinctive elements of the Green Lantern mythos – the black-and-green masked uniform, the Guardians of Oa, the Green Lantern Corps, Abin Sur, Coast City – were introduced here. Green Lantern enjoyed some popularity and became one of the key members of the Justice League of America. In 1994, DC retired Hal Jordan as Green Lantern, turning him into the super-villain Parallax and subsequently killing him off. There were other contenders such as the African-American John Stewart who had been a back-up Green Lantern during several of Hal’s hiatuses during the 1970s and 80s, before Kyle Rayner became the new inheritor of the ring.

Green Lantern has certainly been less popular a character in screen incarnations than other DC superheroes like Superman, Batman, Wonder Woman and The Flash – even Aquaman has had more screen time. Green Lantern had made occasional appearances on shows like The Superman/Aquaman Hour of Adventure (1967) and Super Friends (1973-86). He also made a live-action appearance in the tv pilot Justice League of America (1997) played by Matthew Settle, although that was oddly the Guy Gardner characterisation of Green Lantern, Abin Sur’s supposed backup choice who became an unstable character in subsequent comic-book appearances.

Green Lantern: First Flight works well on screen. One has seen enough of the Bruce Timm films by now to know that, though liberties and continuity changes will be conducted, his films and series are always the most faithful of any screen works in regard to respecting the original DC comic-book sources. We get all the familiar aspects of the Green Lantern canon – the far-too-obviously named Sinestro with his pencil-thin mustache (who was apparently originally modelled on actor David Niven) and his emergence as the Yellow Lantern; appearances of other members of the Green Lantern Corps such as Kilowog, Boodika, Arisia Rrab and the chipmunk-like Ch’p; as well as appearances from the Weaponers of Qward and Kanjar Ro, a super-villain who has turned up in various DC stories. The only complaint might be the depiction of the Guardians of Oa who seem petulant and squabbling as opposed to magisterial and infinitely wise – but then one supposes if the film went with the original comic-book depiction, we would have a bunch of blue-skinned Yoda clones.

One of the problems I have always had with a superhero like Green Lantern is that when you have a character who is capable of manifesting anything by thinking about or protecting himself from most damage by whipping up a shield, it makes him so powerful that it limits dramatic potential. Like Superman, writers have to keep dreaming up more-gigantic-than-lifesize menaces to give their heroes an evenly balanced challenge, or creating flaws (Kryptonite, the colour yellow) so as to not make the characters too invulnerable. This is the problem in Green Lantern: First Flight but Lauren Montgomery compensates firstly by dazzling one with the action sequences and secondly with a decided sense of humour.

All of Bruce Timm’s series and films are worth watching for their superheroic action sequences alone. Nobody manages to scale them with the feeling of amazement and powerfulness as Timm and associates do. There are some fabulous action sequences here with the Green Lanterns pursuing Kanjar Ro’s escaping ship into combat down a hyperspace tunnel or the crashing of a ship at the spaceport. It is during these scenes that Hal Jordan emerges with real heroic strength as a character. The film reaches its peak with a fabulous climax as Sinestro battles the Green Lanterns en masse and turns the Yellow Lantern on Oa in a swathe of mass destruction, before Hal Jordan rises up as a super-empowered Green Lantern after touching the Green Element and blasts Sinestro through entire buildings and mountains, before battling up into orbit and dragging two moons to collide together to crush the Yellow Lantern.

When it comes to humour, one of the more amusing aspects is watching the various items that Hal Jordan keeps producing from the ring – a ladder to batter Kuch like some WWF cage match; giant boots to stomp opponents; a gigantic golf club to swat the Yellow Lantern into outer space. At one point, a bored Hal is shown doing yoyo tricks with his ring. At another point, he is asked what he is doing as he tackles several aliens, “Just a little pest control problem,” he replies and manifests a giant-sized fly swat to squelch his opponents against the wall.

The only quibbles that one might make would perhaps be the story’s hurry to get to the main action. Hal Jordan becomes conversant with his ring almost overnight – there are no scenes of him trying it out or training in its powers. There is also a lack of any amazement, surprise or culture shock on his part at being thrown into an intergalactic society – he appears to become conversant with this in no time with there being only a single throwaway line about the ring’s library of intergalactic information. The early scenes chasing down Kuch in the intergalactic bar are disappointingly routine as Lauren Montgomery shows too obvious a debt of inspiration to the cantina scene from Star Wars (1977).