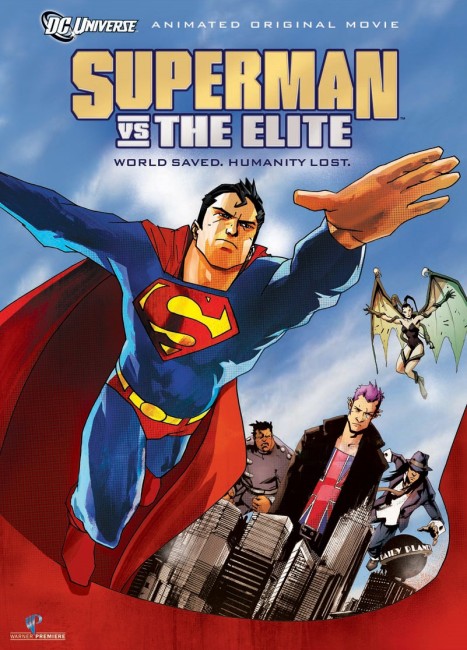 Superman encounters a new five-person superhero team known as The Elite, led by the powerful British psychic Manchester Black. At first, he and The Elite work together but Superman backs off after seeing them prepared to torture bad guys for information and later their willingness to kill them. However, The Elite are celebrated by the American public for their tough, no holds barred stance against terrorists. Finding himself suddenly unpopular, Superman begins to question whether his morals are old-fashioned in the modern world. However, in his taking a stand against The Elite’s increasing readiness to kill, this pits Superman against them in combat.

As with many of the DC Universe Original Animated films, Superman vs. The Elite is based on a classic graphic novel. In this case, it adapts What’s So Funny About Truth, Justice and the American Way? (2001), written by Joe Kelly that appeared in Action Comics #775. Coming out not long after 9/11, the issue was seen as a response to the legitimisation of torture and other intrusions of civil liberties that were imposed by the George W. Bush government. The story received a great deal of acclaim when it came out.

The Elite appeared in subsequent DC stories and were later reconceived by Joe Kelly as Justice League Elite, a team formed to deal with morally questionable missions. Joe Kelly, who also writes the script for the film, is a regular comic-book writer who created the graphic novel that became the basis of the film I Kill Giants (2017), for which he also wrote the screenplay. Elsewhere, Kelly is part of the Man of Action collective who created the animated series Ben 10 (2005-8).

The other problem with the plot is that it involves Superman taking a stance (fair enough) and then an ending [PLOT SPOILERS] where for no real motivated reason he suddenly gives in to rage and violence, killing The Elite before a twist ending reveals that this is all a set-up to defeat them. Up until the big twist is revealed, this involves substantially twisting the character of Superman out of shape and becomes frankly unbelievable. (For that matter, the film seems to assume that the rest of the DC Universe doesn’t exist or is conveniently absent – where are the rest of the Justice League and what would their take on The Elite’s ruthlessness be, for instance? You find it hard to believe that Batman with his avowed stance against killing would remain silent on the issue).

As one of the DC Universe Original Animated Films, Superman vs. The Elite works unevenly. By comparison, Superman Unbound (2013), which only came out the year after, is head and shoulders above this in terms of quality. Superman Unbound writes a strong story and has more quality artwork whereas Superman vs. The Elite seems to coast by. The action is generally okay, even if the superheroic battles never amount to too much.

This was the only entry in the DC Universe Original Animated films directed by Michael Chang. Chang was a veteran of other DC-adapted animated tv series such as Teen Titans (2003-6), Batman: The Brave and the Bold (2006-11) and Young Justice (2011-2). Chang also co-directed the animated DC film Teen Titans: Trouble in Tokyo (2006).