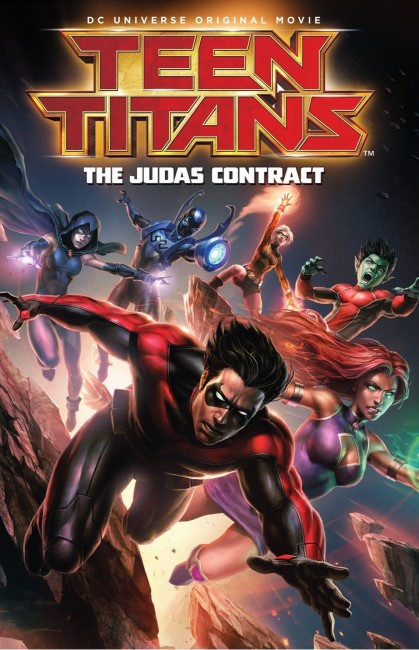 The Teen Titans intervene to aid Starfire, a princess from the planet Tamaran. Five years later, Robin, now known as Nightwing, is in a relationship with Starfire and leads the Teen Titans. They deal with a new threat from the cult led by Brother Blood who is determined to capture the Titans and place them in a machine that will allow him to absorb their powers. Brother Blood has recruited the mercenary Deathstroke to capture the Titans. Deathstroke’s secret weapon is Terra, a new recruit to the Titans who can control geological elements. Unknown to the Titans, she is loyal to Deathstroke and is working from within to betray them.

The Teen Titans are one of the numerous superhero teams that populate comic-books. Originally appearing in DC Comics in 1964, the group was pitched in terms of the idea of young sidekicks like Robin, Wonder Girl, Aquaboy, Kid Flash and Speedy coming together to form their own equivalent of the Justice League. The comic-book series was cancelled in 1973 but successfully revived in 1976 and then again as The New Teen Titans in 1980. The compliment has undergone changes over the years with a number of new heroes being created specific to the group.

I grew up reading DC Comics. Teen Titans was never a particular favourite, although I had brought/read the occasional issue over the years. I had dropped out of reading much in the way of comics since then (hey, takes away from watching movies) and was not familiar with the new line-up of characters that we get here, almost none of whom appeared in the original line-up I was reading in the early 1980s. Thus it is kind of bewildering being thrown into the midst of an adventure with a bunch of characters that you know nothing about. Not to mention that soon after the opening, the film does a leap forward five years and gives us an entirely different line-up of Titans.

The name of Sam Liu has become ubiquitous with the DC Animated Universe Original Movies. This is the thirteenth of the films he has directed so far. I am not that big a fan of Liu as director – he lacks the imaginative flair with superheroic action sequences that some of the other DC Animated Universe directors have. The Judas Contract has a strong story – the central arc is that of Terra who we discover part way through is actually a plant who has been groomed for the express purpose by Deathstroke and we follow her divided loyalties between being Deathstroke’s stooge and discovering connections to the Titans.

The rest of the Titans are delivered in some reasonable characterisations. The film also has a reasonable degree of adult writing – Starfire happily blurting out about her and Nightwing’s sexual relationship, the teenage Terra eagerly trying to get it on with the fortysomething Deathstroke (an aspect of the original The Judas Contract comic that was cut from later reprints) – that leaves you wondering who the target audience for the film is (the original Titans were a way of pitching the Justice League to young audiences). Sam Liu’s direction of the superheroics is passable and thanks to a reasonable story The Judas Contract comes out better than some of his other DC Animated Universe Original Movies.