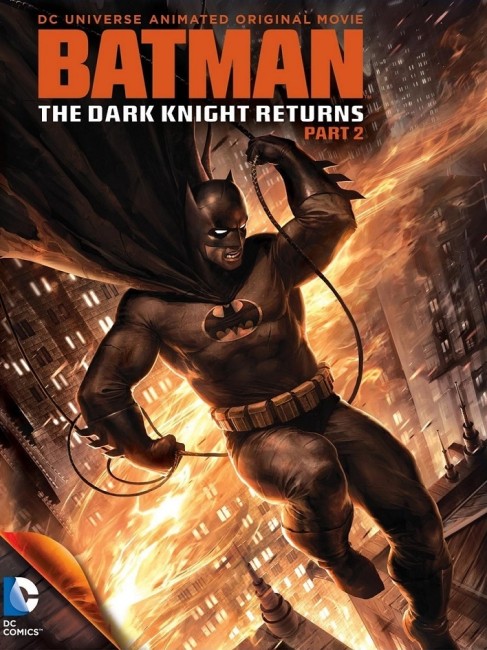 Batman’s return has caught media attention. The President asks Superman to step in and persuade Batman to go back into retirement but after they converse, Superman realises that the only way Bruce will be stopped is by being killed. Taking over from the retiring Commissioner Gordon, the new commissioner Ellen Yindel immediately issues an arrest warrant for Batman and mounts a heavily armed crackdown. At the same time, The Joker has persuaded his liberal psychiatrist to allow him to appear on a tv talkshow and plead his case as a victim of Batman. The Joker immediately uses the opportunity to kill the audience with Joker gas and make an escape. He sets the stage for a lethal showdown with Batman at a fairground. Meanwhile, escalating tensions between the US and the Soviet Union over the island of Corto Maltese has resulted in the Russians launching a nuclear warhead. Superman attempts to deflect this but is caught in the explosion as it detonates over the skies of Gotham City. The explosion wipes out all power in the city. Batman stands up to wield the former Mutant Gang, who now call themselves the Sons of Batman, into a force of order to hold back the anarchy. The stage is then set for the final showdown between Batman and Superman.

There was rumour for a time that Batman: The Dark Knight Returns Part II would be the last of DC Universe Original Animated Movies due to poor sales – although with the announcement of Superman Unbound (2013), this would appear not to be the case. With this in mind, it seemed fitting that Bruce Timm and the DC Universe Original Animated Movies would go out on an adaptation of Frank Miller’s classic graphic novel The Dark Knight Returns (1986), which is arguably the most famous and influential of all modern graphic novels.

The good news is that Batman: The Dark Knight Returns Part II is a far more satisfying entry than Part I was. The true strength of Frank Miller’s story comes into its own and the film is staged as a series of epic confrontations between iconic DC characters. Here Michael Emerson, best known as Ben Linus on tv’s Lost (2004-10), does a fine Joker, coming out as one of the few voice performers to stand up to Mark Hammill’s sublime portrayal throughout the earlier Bruce Timm animated series. Jay Oliva gives the story a much darker bite than the first film and jumps in with some satisfying action scenes – which were one of the weaker aspects of Part I – creating fine scenes with Batman taking on dozens of armed cops on a rooftop or going up against Bruno, and especially during the showdowns with The Joker and Superman.

The confrontations between the characters are played with epic strength and are the finest part about the film. The showdown between Batman and The Joker in the Tunnel of Love, both of them knowing that it is their final battle together where there comes a sense of welcome weariness to The Joker’s taunts, is excellent. This is also much more violent than all of the other Bruce Timm films where the production team have clearly decided to go for broke and we get decidedly un-children’s movie scenes such as The Joker’s assistant getting his head splattered by a rollercoaster, The Joker slitting his psychiatrist’s throat with a broken cup and going on a shooting rampage through the fairground.

Of course, the capping set-piece is the climactic fight between Batman and Superman. It is a battle that one cannot help but think is mismatched – Batman who has no superpowers vs Superman who has near godlike abilities. The film evens the battle somewhat by giving Batman a powersuit and having Superman weakened by a direct hit from a nuclear warhead – even so, it still feels like a gnat against a giant. Nevertheless, the film does get the sense of conflicting styles and rivalry between the two down nicely – not quite the boy’s club that most of the comic-book adaptations make it into.

Like the first film, the sequel keeps to the original milieu of the graphic novel and its setting as slightly in a near future from when it was written – the Soviet Union is still an existing threat and the imminent fear of nuclear war hangs over everything. In keeping with what Frank Miller wrote, the story becomes much more overtly politicised. The US President has clearly been modelled on Ronald Reagan (who was The President back in 1986). Miller is critical of Reagan and interestingly sees Superman as a supporter of the US’s overbearing imperialist policies, which was what one always suspected was going on behind that boyscout smile. Miller creates an equivalent of the Falklands War (again very much a political fixture of the 1980s, albeit displaced to the fictional DC location of Corto Maltese) where he has Superman acting as an agent of the US war machine and throwing around Soviet tanks and planes.

(Nominee for Best Adapted Screenplay at this site’s Best of 2013 Awards).