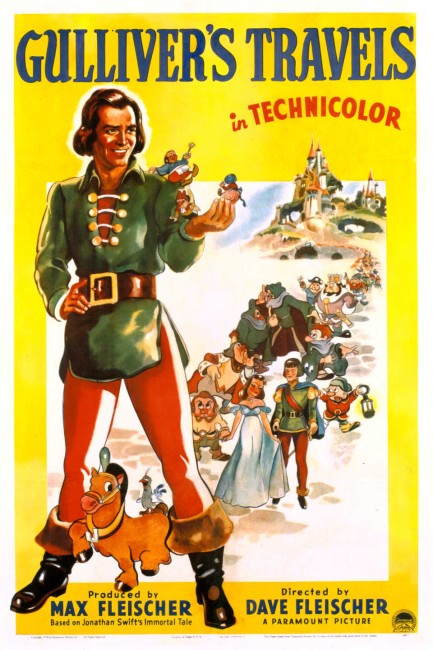 In 1699, Lemuel Gulliver is thrown overboard from his ship during a storm. He washes ashore in the land of Lilliput where he is a giant compared to the tiny people that live there. The prince and princess heirs of Lilliput and its neighbour Blefuscu are about to marry but the two kings argue heatedly over which country’s anthem will be sung at the ceremony, whereupon the two countries announce war. However, when Gulliver is found on the beach, the King of Lilliput sees his superior size as the opportunity to beat Blefuscu.

Disney’s Snow White and the Seven Dwarfs (1937) was the first ever full-length animated film. The less well-known or seen Gulliver’s Travels was the second. It was made by brothers Dave and Max Fleischer, the animators who made some six hundred cartoon shorts during their career and were best known for their Out of the Inkwell and Koko the Clown, Popeye and Superman shorts. [Max was also the father of Richard Fleischer, the live-action director of 20,000 Leagues Under the Sea (1954), Fantastic Voyage (1966), Doctor Dolittle (1967) and Soylent Green (1973)].

Apart from the Disney short film Gulliver Mickey (1934) wherein Mickey Mouse played the role of Gulliver, this was the first English language film adaptation of Jonathan Swift’s classic novel Gulliver’s Travels (1726). It had earlier been adapted by Segundo de Chomon in 1903 and there was a Soviet version in 1935, but both of these appear to be lost.

Originally, Jonathan Swift wrote the novel as a biting social satire. These days the book is rarely regarded as an adult satire but rather is read as a children’s story. Everybody knows it in terms of the first two books – the journey into the Lands of Lilliput and Brobdingnag. Few people have even heard of the Floating Island of Laputa and the Land of the Houyhnhnms, which constitute the third and fourth books. This film marks the point around which the change from satire to children’s story began – in fact, this version never take the story any further than Lilliput. Jonathan Swift’s satire has been replaced by the cute.

The film is designed in the shadow of Snow White – it comes filled with cuddly, rounded anthropomorphic figures and cute animals cooing over one another. Noticeable about this version is that it is less a story about a man finding himself in a land of little people than it is a story about a land of little people finding a giant on their beach. The story is told mostly from the Lilliputians perspective, not Gulliver’s. In every other film, Gulliver wakes up to find himself tied down on the beach within the first five minutes; here it takes half the film before Gulliver even wakes up. And once awake, Gulliver is a stolid figure.

What makes this version however is the level of its visual invention. The devices used to imprison Gulliver are delightful – arrows with ropes attached fired to pin him down, his knees being tapped with hammers to get them into position, and later his shoes being polished by people on stilts and he being shaved with a scythe. The film is filled with wonderfully charming images – the king dancing with Gulliver’s two fingers, Gulliver tucking the tablecloth over several revellers passed-out at the banquet table as though it were a bedspread. The Fleischers have a great deal of fun coming up with such touches and the film becomes positively ingenious in their visuals at times.