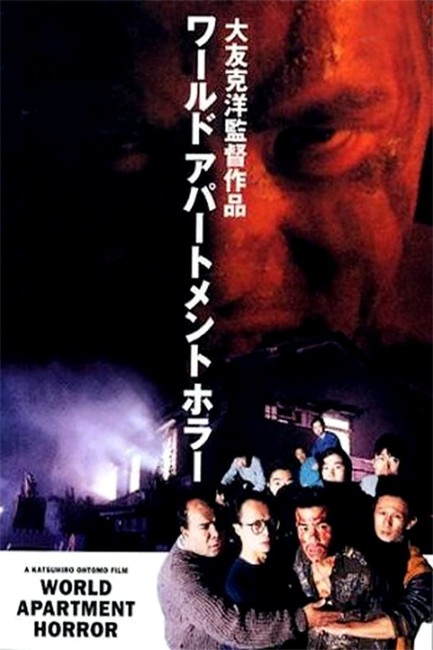 Ita, a low-level Yakuza enforcer, is sent to an apartment building to find what has happened to his brother Iri who was managing the house. He finds Iri in a crazed and paranoid state, barricaded in his room and wielding a sword. Ita is given orders by his superiors to evict all the tenants within a week so that the building can be demolished. He is told to use force if necessary. Upon arriving at the apartment, Ita finds that all the tenants are foreigners of differing nationalities. Their erratic grasp of Japanese causes some problems as he tries to persuade them to leave and is forced to employ more extreme methods when they fail to understand him. He then becomes aware that there is also a supernatural force in the building that is sabotaging his every effort.

Katsuhiro Otomo became a cult name in anime for his work as the director and writer of Akira (1988). Otomo has been a celebrated manga writer and artist since the 1970s. He made his directorial debut on segments of the anime anthologies Neo-Tokyo (1987) and Robot Carnival (1987), before being given the opportunity to direct Akira based on his own manga. The enormous success of the film made Otomo for a time the most recognised anime director in the West.

With World Apartment Horror, Otomo made his debut as a live-action director, although this failed to enjoy anything of the same profile that Akira had. Otomo subsequently worked in various capacities on other anime films such as Roujin Z (1991), Memories (1995), Perfect Blue (1997), Spriggan (1998) and Metropolis (2001) but, aside from a segment of Memories, did not direct again until the anime Steamboy (2004) and the live-action Bugmaster (2006), followed by a segment of Short Peace (2013). The film also had the then unknown name of Satoshi Kon on the credits, an Otomo protege who would rise to become an anime director to reckon with with the likes of Perfect Blue, Millennium Actress (2001), Tokyo Godfathers (2003) and Paprika (2006).

World Apartment Horror is an oddity. It has been made on a low-budget and it is clear that Katsuhiro Otomo’s skills as a live-action director were still in the process of improving. Moreover, the horror aspect of the title is not always an easy fit. A good two-thirds of the film plays out as something altogether different and it is only during the latter third that the film enters into horror territory.

In these early sections, Otomo seems to be wanting to make a film about racial prejudice – with Yakuza heavy Hiroki Tanaka being forced to move into an apartment and deal with a group of people of different ethnic persuasions. The droll interaction of these – they and their misunderstandings of Japanese (at one point, he tries to tell them he is from the Yakuza and they take this to mean that his name is Yakuson) – play out as a mundane comedy. It is almost, if you like, Batteries Not Included (1987) without the flying saucers and the thugs rewritten as eventually-redeemed heroes.

World Apartment Horror is an interesting oddity, although is not a particularly standout film. It was Katsuhiro Otomo’s first outing as a live-action director and one would be prepared to forgive him as a journeyman director – that is if he had not just made the stupendous and amazingly assured Akira three years before. There never seems enough of the initially promised bizarreness, nor of the titular horror.

The film gets a good deal of life from Hiroki Tanaka who gives a wonderful live wire performance as the Yakuza enforcer, including scenes dancing wildly to karaoke in the hallway and later waving about a samurai sword and chainsaws. During the latter sections, the film emerges as a mildly crazed possession and exorcism effort. You get the impression though that Katsuhiro Otomo was more interested in making an anti-prejudice comedy than a horror film.

Certainly, you suspect that if World Apartment Horror had been made following the renaissance in Japanese horror that came about subsequent to Ring (1998) or even the gonzo Japanese splatter films such as Tokyo Gore Police (2008), Vampire Girl vs Frankenstein Girl (2009) et al, it would have emerged as a very different film.