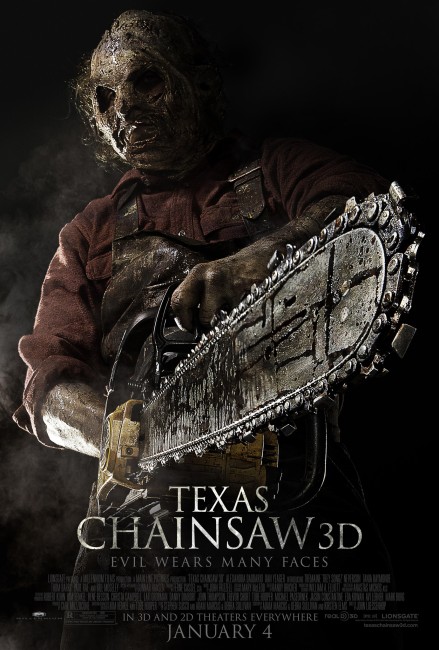 Heather Miller learns that she has received an inheritance in her grandmother’s will. Defying her stepparents desire for her not to do so, she and three friends, along with a hitchhiker they pick up, travel to the small town of Newt, Texas where she learns that she has inherited a large mansion. As she and her friends explore the property, they awaken a huge hulking figure with the mind of a child that wears a mask of human skin and lives in a hidden room in the cellar. Leatherface pursues them with a chainsaw. As Heather flees the attack, she learns the history of how the locals burned the home of her family, the Sawyers, to the ground and that the same people now want to silence her.

This sequel, which is unrelated to the 2003 remake, comes from a variety of parties, including Millennium Films and their parent company Nu Image who make mostly B-budget action and monster films but in recent years have been behind a bunch of big-screen revivals of 1970s/80s properties with the likes of The Wicker Man (2006), Day of the Dead (2008), It’s Alive (2008), Rambo (2008), The Bad Lieutenant – Port of Call: New Orleans (2009), Conan the Barbarian (2011), The Mechanic (2011) and Hellboy (2019). Director John Luessenhop had previously made the non-genre Lockdown (2000) and Takers (2010). Screenwriter Adam Marcus’s greatest contribution to the world of cinema was as director/writer of the Friday the 13th sequel Jason Goes to Hell: The Final Friday (1993). Also in the screenwriting mix is Stephen Susco who wrote the English-language remake of The Grudge (2004) and its sequel The Grudge 2 (2006) and directed Unfriended: Dark Web (2018).

All of the Texas Chainsaw Massacre films to come out after the first exist in a hodgepodge of continuity that contradicts every other film. Texas Chainsaw 3D is no different, although it is the one sequel that pays the most fanservice than any other follow-up. The film gets in cameo appearances from the original Leatherface Gunnar Hansen who plays the head of the Sawyer clan in the prologue, while Bill Moseley, who played the new family member Chop Top in The Texas Chainsaw Massacre 2, is cast as the equivalent of The Cook (the family member who is seen leading the siege) and Marilyn Burns, the original Sally Hardesty, plays the grandmother in the flashbacks. Furthermore, the film gives the backwoods family the name Sawyer and states the name of the Cook as being Drayton Sawyer (a continuity aspect that was introduced in Texas Chainsaw Massacre 2 – even if this film throws out connection to that sequel in every other aspect).

Original director Tobe Hooper and co-writer Kim Henkel have signed on as executive producers – not that that that gives you any hope for a better sequel. Tobe Hooper’s directorial output since the 1990s slid badly, while Kim Henkel has made only a single film, Return of the Texas Chainsaw Massacre, outside of his associations with Hooper, where you get the impression that either would whore their services out for some extra income.

The opening of the film replays a montage of scenes from the 1974 original (which have been retooled for 3D). This creates a massive continuity gap. While the original film took place around 1974, the family gravestone states that the grandmother died in 2012 and this film is clearly taking place in a contemporary setting. This results in a gap of nearly forty years between the events depicted in the two films. However, if Alexandra Daddario was an infant taken from the house shortly after the original massacre, this would surely make her somewhere in her late thirties as opposed to around Daddario’s natural age of twenty-five.

This new film is billed in all of the advertising as Texas Chainsaw 3D, although is only called Texas Chainsaw on the opening credits. Even before sitting down to watch the film, I had problems with this very notion – the idea of a Texas Chainsaw Massacre film in 3D. Ever since 2009, 3D has become a near-ubiquitous (and near-useless) gimmick used to sell films (for which the extra dimension tacked on equates with higher ticket prices thus more money at the box-office). The original Texas Chain Saw Massacre worked through its outlaw rawness, in breaking all the rules. By contrast, Texas Chainsaw 3D has become just another franchise film that has been revived for one more outing. Where the original film has such a rawness and brutality that had it banned in a number of countries, this sequel is pushed with a gimmick (3D) that is designed to make it more sellable at the box-office.

In contrast to Marilyn Burns’s brutalised heroine, all that new heroine Alexandra Daddario convinces you of is an actress who has contractually stipulated that she is not allowed to get too dirty or her image allowed to be tarnished. A scene in which Leatherface strings her up is distracted by having been shot so that her torn-open shirt falls in an unnatural way that does not expose her breasts, which represents a criminal tameness for a film that sets out to be a sequel to something as raw and taboo-defying as The Texas Chain Saw Massacre. (The rest of Daddario’s performance seems dominated more by her ability to expose her midriff than actually do any acting).

Moreover, the 3D is used in a way that almost entirely contradicts the mood of the original. The original worked through its harshness and rawness, where all of the grimness and blood was only ever suggested. By contrast here, we get chainsaws being repeatedly shoved out of the screen at us, while the gore is all there and in your face, including a strung-up body being sawed in half and blood spraying out of the screen.

The other major difference is one of directorial tone. Tobe Hooper created a magnificent vision of Southern Gothic – a world far from the confines of the city where the characters live in littered filth and the world of the Texan smalltown became something lurking with threat at the intrusion of city slickers. None of the other films have come anywhere near recapturing that sense of brooding menace. Texas Chainsaw 3D has dropped this look for something much cleaner – in look and the pacing of its scenes, the film is no different from a modern formula slasher film.

The film sort of follows the same plot path as the original – a group of people travelling across Texas in a van to visit a family homestead; their picking up a hitchhiker along the way; most of the group being butchered by Leatherface as they explore the house. However, after about the halfway point, Texas Chainsaw 3D takes off in a completely different direction that almost entirely kills the film. In a desire to add something new, the film’s scriptwriters have followed the lead offered up by sequels like The Empire Strikes Back (1980), Halloween II (1981) and indeed Adam Marcus’s Jason Goes to Hell by tacking a family connection onto the previous film. This promptly falls into the pitfall offered by films such as the remakes of Halloween (2007) and Friday the 13th (2009) and the Star Wars prequels where giving the central villain a backstory and motivation serves to considerably weaken the threat they had.

[PLOT SPOILERS CONTINUE] However, the latter half then has Daddario being abducted by the redneck conspirators, whereupon Leatherface discovers they are related and suddenly becomes the cavalry who saves her. This results in some laughable twists and turns – like where two middle-aged rednecks turn on Leatherface and are seen kicking and beating him as he cowers on the ground. (It is sad to see how pathetic this makes the hulking character that struck terror into an entire generation seem). In the next move, Daddario gets up and helps despatch the two rednecks (who the film sees as more of a menace than Leatherface).

The finale of the film sees her and Leatherface returning to the mansion with both having accepted familial responsibilities and she now acting as his keeper, seemingly having forgotten that only a matter of hours earlier he had slaughtered her boyfriend and friends and pursued her with a chainsaw. (Maybe in Texas blood connection is thicker than fears for personal safety but I am quite certain if a long lost family member of mine had slaughtered my best friends and loved one and aggressively tried to kill me then I’d be more interested in calling the authorities and/or whatever passes in Texas for places to confine the criminally insane and that the last thing I would be thinking about is shacking up and agreeing to act as their homecare aide). There is an incredibly lame post-end credits gag about Alexandra Daddario’s stepparents turning up at the door of the mansion and being greeted with a chainsaw.