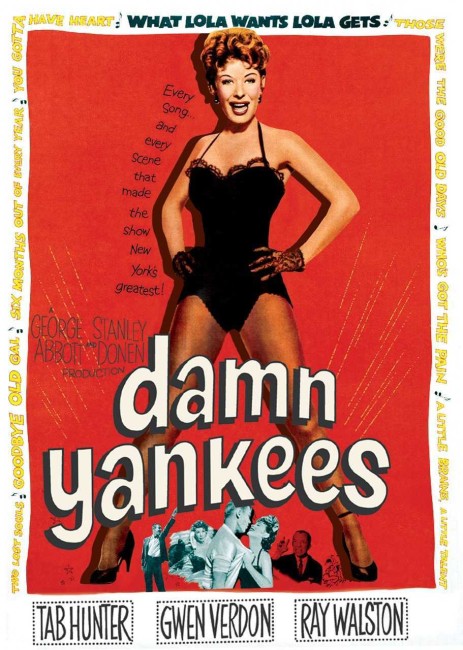 aka What Lola Wants

Joe Boyd is a huge fan of the Senators baseball team to the extent that his wife Meg feels neglected. Frustrated at the Senators’ losing streak, Joe idly says that he would sell his soul if the Senators could have a decent long ball hitter. He then receives a visit from Mr Applegate who offers Joe the opportunity to become that hitter in return for a contract for his soul. Joe agrees but with the stipulation that he can activate an out clause if he wants by September 24th. Applegate then transforms Joe into a strapping young man and introduces him to the Senators’ coach as Joe Hardy. He is selected for the team after repeatedly demonstrating the ability to hit the ball out of the park. On the team, Joe rapidly becomes the star player and a celebrity throughout the country. Through all of this, Joe misses his wife Meg. He goes to her and rents out the other Joe’s den so that he can be near her. However, Applegate is determined to make Joe go through with the contract and calls upon the wiles of the sultry Lola to seduce him into signing up.

Damn Yankees is a classic film. It comes adapted from a popular musical that first appeared on Broadway in 1955. The musical was in turn based on the book The Year the Yankees Lost the Pennant (1954) by Douglass Wallop. The musical was adapted to film by Warner Brothers where it was co-directed by George Abbott, who had staged the Broadway version, and Stanley Donen who was gaining a reputation in the era as a director of big, bold film musicals with the likes of On the Town (1949), Royal Wedding (1951), Singin’ in the Rain (1952), Seven Brides for Seven Brothers (1954), Funny Face (1957) and The Pajama Game (1957). (Stanley Donen has made a number of other genre films – see below).

The film version retains the cast from the Broadway version, including Gwen Verdon and Ray Walston who both had their careers launched as a result of the film, as well as celebrated choreographer/later film director Bob Fosse. The sole exception to the Broadway cast was Tab Hunter, who was being promoted as a matinee pin-up idol during the era and was brought in to take the lead for box-office appeal.

I will openly admit my bias against musicals. It’s a form that does nothing for me at all. That said, I was taken away, almost prepared to change my mind by Damn Yankees. The songs are incredibly lively. The film looks amazing in its 00s dvd restoration – the print beautifully crisp and the colour incredibly rich to the point that it almost bleeds out of the screen. Bob Fosse choreographs the dance sequences with elan – entire fields of dancing baseball teams, or the scenes with Gwen Verdon parading about as Lola, which sizzle so much they almost burn the screen up.

Gwen Verdon (who married Bob Fosse not long after) never seems the most likely candidate for the role of the seductress Lola – bony, pale skinned to the point of being alabast, a wild unruly mop of carroty hair, a long face and prominent hooked nose. However, while you sit reacting to the somewhat ordinary seductress at the outset, all objections are abruptly silenced the moment she starts moving. She has an amazing sequence in a locker room attempting to seduce Tab Hunter that involves her strutting, stripping, grinding and collapsing all over him. (Of course, the irony of such a sequence, which came out in later years, is that Tab Hunter was gay in real life making Joe’s ability to remain unmoved by such a display all the more apt).

The story could almost have been conceived as a riposte to the minor hit of Angels in the Outfield (1951) from a few years earlier, wherein angels came down to invisibly aid a failing baseball team. By contrast here, it is The Devil in the person of Ray Walston who steps in to offer them a winning chance. The story contorts around the basic diabolical pact with a reasonable degree of cleverness, certainly far more so than is usually the case in musicals, which tend to tell their stories with big simplistic emotions and a lack of complexity.

The film is very much a product of attitudes that were prevalent in the 1950s, although you keep thinking how they would be hard-pressed to translate today – a world where a guy wouldn’t even think twice about straying from his decidedly frumpy wife and is determined to keep his oath to her above all else in the face of a determined seductress; that said seductress would be so moved by such moral purity that she would fall for him; that the wife would be forced to evict Joe as a boarder after Mr Applegate stirs up neighbourhood gossip about she living on her own and having a younger man under her roof.

It is a film that believes that basic honest middle-class decency will always win out – even if such decency requires the wife to come to court a fabricate a lie about having known Joe. The morality of the day was such that Gwen Verdon’s dance movements ended up being edited as they were considered too suggestive, while the film had to be retitled as What Lola Wants in the UK so as to remove the word ‘damn’ from the title.

Stanley Donen’s other genre films include:- the Peter Cook-Dudley Moore black comedy, the original Bedazzled (1967), a dark satire on pacts with the Devil; The Little Prince (1974), a fable about an alien boy; and the killer robot science-fiction film Saturn 3 (1980).. Bob Fosse gained a great deal of fame as a dance choreographer and later went onto a directorial career of his own with films such as Sweet Charity (1969), Cabaret (1972), Lenny (1974), the autobiographical fantasy All That Jazz (1979) and the Dorothy Stratten biopic Star 80 (1983).