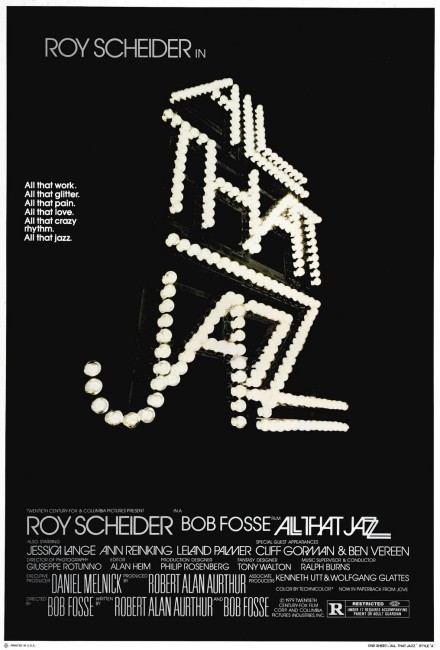 Dance choreographer/filmmaker Joe Gideon discusses his life with a beautiful angel of death. He touches upon his problems with drugs and drink, the infidelities that destroyed his marriage and the pressures that surround the readying of his latest two million dollar Broadway musical, which culminated in his collapse from a heart-attack.

It is no secret that All That Jazz is a thinly disguised work of autobiography upon Fosse’s part. The workaholic Fosse was inspired to make the film after having a heart-attack. Many of the characters, including Ann Reinking who essentially plays herself, are based on people in Fosse’s life. (Fosse was involved with both Ann Reinking who plays Roy Scheider’s girlfriend, as well as Jessica Lange who played the angel).

Fosse died in 1987, a few years after the film, something that makes the character’s surrender into the arms of the angel of death at the end and realisation that death is the only thing he can take seriously all the more fascinating. Yet all the self-eviscerating introspection gets rather pretentious – sample dialogue: “Why don’t I get married again? Because I can’t find someone I dislike enough to inflict that on”. At almost two hours, all the egocentric surrealism and lack of narrative thread goes on far too long.

Fosse’s ace in the hole however is Roy Scheider, sweated up, his hook nose and a Mephistophelean beard used to create a serpentine shiftiness in a complete chameleon shift from the familiar Everyman roles that Scheider was usually cast in. Expectedly, Fosse excels when it comes to the choreography – particularly the torridly sensual Air-Erotica number with half-naked dancers cavorting in torchlight, and a top hat and tails number conducted in Roy Scheider’s apartment by Ann Reinking and Erzsebet Foldi. Although the fantasy sequences with dancers in tights and feather fans circling Scheider on a hospital bed is more bizarre than convincing. There is certainly a liquid scintillation to the film and Fosse’s large earthy blend of life and dance absorbs somewhat.

Ultimately though, it is a narcissistic film – Fosse’s self-analysis comes with a caustic self-evisceration that is supposed to shine with a veneer of sophistication yet becomes increasingly pretentious. By the end, Fosse/Gideon only seems to have swapped one form of self-absorption – the disregard of self – for another – that of morbid neurosis.