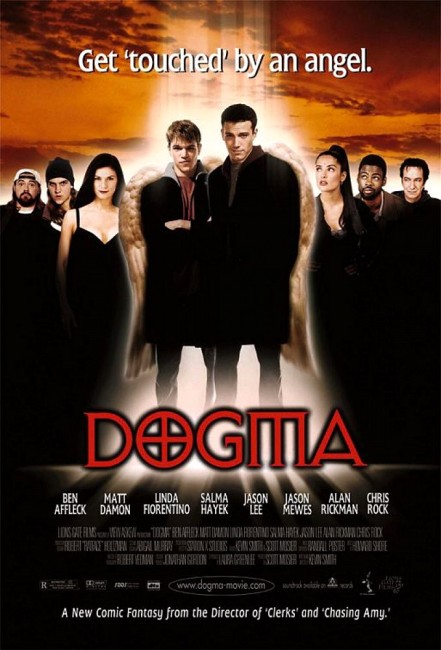 As part of his attempt to make the Catholic Church more modern and friendly, a cardinal in New Jersey offers plenary indulgences in the form of a doorway that parishioners can walk through and have their sins forgiven. Two angels that have been banished to earth – Loki, the former angel of death, and his friend Bartleby, who persuaded him to give up righteous smighting – see walking through the door as their means to be forgiven and gain readmittance to Heaven. They head to New Jersey, with Loki taking the opportunity to gain extra bonus points by obliterating the board of a fast food company along the way. Metraton, the angel that acts as God’s voice, appears to Bethany Sloane, an abortion clinic worker who has lost her faith, and asks her to stop Loki and Bartleby. If Loki and Bartleby succeed they will prove that God, who banished them to Earth, is fallible, which God is not, and will thus negate all existence. Bethany is joined by two horny slackers, Jay and Silent Bob, along with Rufus, the fourteenth apostle (who was not mentioned in The Bible because he was Black), and Serendipity, the muse of inspiration, who has taken human form and is forced to work as a stripper. However, also on the trail is the demon Azrael and the minions of darkness.

Director Kevin Smith developed an instant cult following with the success of his drop-out-of-film-school no-budget independent feature Clerks. (1994). This was something consolidated by Smith’s better-budgeted follow-ups Mallrats (1995) and Chasing Amy (1997). Kevin Smith is a fan filmmaker and a lover of comic-books – he has sunken profits from his films into buying a comic-book store, has written various issues of Daredevil and Green Lantern, as well as the script for the defunct Tim Burton/Nicolas Cage Superman Reborn project and directing episodes of The Flash (2014- ) and Supergirl (2015-21). Smith’s films at once suggest a head-on collision between Joe Dante or Kevin Williamson, the Lemon Popsicle films and Richard Linklater.

Where somebody like Joe Dante’s films are predicated upon the quoting of past science-fiction and horror films with the Time Machine, Robby the Robot and various 1950s sf stars popping up in the background, Kevin Smith plays less of a cinematic game of Where’s Waldo with fans than a Seinfeld-esque game of sarcastic deconstruction. All of Kevin Smith’s films brim with jokes about the Star Wars trilogy – Clerks. with its hilarious dialogue about Death Star contractors; and Mallrats, which featured Smith’s character of Silent Bob attempting Jedi mind tricks; while Dogma compares Linda Fiorentino’s quest to Han, Ben Kenobi and Chewbacca in Star Wars (1977).

Although here, Smith reserves some of his funniest barbs for slagging off at John Hughes – Jason Mewes has an hysterical monologue about their quest to find Hughes’ New Jersey town where all the guys are dorks and there are no drug dealers. Later Salma Hayek’s muse has a throwaway line – “I was responsible for all the Top 10 box-office hits of the last decade. Except for the one about the kid left alone in the house – someone sold their soul for that one.”

The downside of Kevin Smith’s films is that all the in-joking, undergraduate scatology and acerbic slacker observations on pop culture tend to run into a sameness after a time. While Smith’s films have proven enormously witty and inventive so far, one suspects that several more films in the same vein would eventually milk dry the niche that Kevin Smith has established for himself – something that was starting to happen by the time of his next film Jay and Silent Bob Strike Back (2001).

The subtlety that does not seem to be being appreciated amid this perceived controversy is that Dogma is a devout Catholic film – Kevin Smith himself is a practicing Catholic. [Compared to say Stigmata (1999), released two months earlier, and was a film that accused the Catholic Church of no less than conspiring to hide the truth about Christianity, yet managed to pass by without the slightest hint of controversy, Dogma is a model of theological conservatism].

What dazzles one about the film, at the same time as one is being taken back by its irreverence, is the ideas and discussions that Kevin Smith manages to pack in. Smith can throw up such playful silliness as the fourteenth Apostle protesting that Jesus was really Black but the fact was edited out of the Bible and the Angel of Death standing in a gunstore discussing the difficulty of raining fire and brimstone down on Sodom and Gomorrah, alongside such dazzling ideas about how God wants believers to have more ideas rather than rigid beliefs. Dogma is a film that for all its mocking and irreverent tone leaves one with less of a sense of Kevin Smith expressing an iconoclastic defiance as it does of Smith fearlessly trying to re-present, even wholeheartedly proselytise faith in terms understandable to a modern generation.

Dogma is not without its faults. One of these is that with so many ideas packed in, it frequently comes out as static and talky. Previous Kevin Smith comedies have sparkled with a snappy pace and insouciant lightning-fast black twists, but Dogma feels so weighted with points to make that it lacks these films’ giddy lightness of touch. Nor do Smith’s attempts to do cod-Tarantino work. The image of Matt Damon as a gun-wielding Tarantino hood who also happens to be an Angel of Death is amusing – there is an hilarious scene where Damon invades a corporate boardroom to exact divine anger – but in the failure of the action scenes to move, it is clear that this is not Kevin Smith’s forte.

Kevin Smith later returned to genre material with the horror film Red State (2011) about a doomsday cult, Tusk (2014) about a man who is surgically altered into a walrus and its follow-up the horror comedy Yoga Hosers (2016) featuring some of the same characters against miniature cloned Nazi soldiers, and the Halloween episode of the horror anthology Holidays (2016). Also of interest is The Death of “Superman Lives”: What Happened? (2015), a documentary in which Smith recounts his work as scriptwriter on the aborted Tim Burton-Nicolas Cage Superman film Superman Lives during the late 1990s.

(Nominee for Best Original Screenplay at this site’s Best of 1999 Awards).