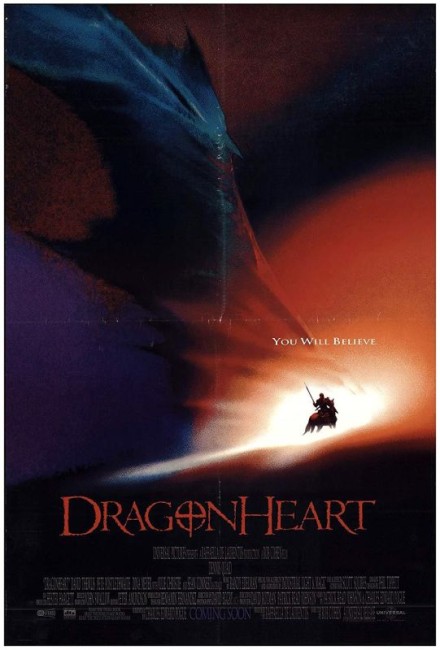 When the young prince Einon is fatally wounded, his squire, the knight Bowen, takes Einon before a dragon and uses the dragon’s magic to heal him. However, when he becomes king, Einon ignores the code of chivalry that Bowen has taught him and brutally subjugates the peasantry. Bowen blames the dragon for this and swears to slaughter all dragons. Many years later in his long crusade, Bowen comes to the last dragon Draco. In his effort to kill the dragon, both he and Draco recognize the other’s wiliness. They agree to a confidence scam where Draco terrorizes villages and Bowen then hires himself to them as dragonslayer to ‘kill’ Draco. This happy congame soon runs up against Einon. Bowen wants to stop Einon’s tyrannical rule of the land but Einon is linked to Draco by magic and Bowen unable to destroy one without hurting the other.

In fantasy, there is surely no character, with the possible exception of the vampire, that is more creatively desiccated than the dragon – at one point, a fearsome guardian of the world and of great treasures and a plunderer of virgins, today an illustration on the cover of most 28 volume trilogies and available as a cute ceramic figure. There is almost little left of the dragon that can command any mythic power and not seem a cliche. However, while creatively worked to death in fiction, dragons have not fared well on the screen. When they are not relegated to juvenile fare like The Reluctant Dragon (1941), Pete’s Dragon (1977) and tv’s Pufnstuf (1969-73), their only successes have been in animation – Sleeping Beauty (1959) and The Hobbit (1977). When done in live-action, dragons have fallen victim to variable effects, more often victim than success – Siegfried (1924), Hercules (1958), Goliath and the Dragon (1960) and Captain Sindbad (1963). There have been two notable exceptions – Dragonslayer (1981) and this – and a couple of half-exceptions, Dragonworld (1994), and The 7th Voyage of Sinbad (1958) (although there the dragon was only one of a menagerie of creatures).

However, despite the prevailing trend in published fantasy, neither Dragonslayer or DragonHeart were box-office successes. DragonHeart begat the CGI incarnation of the dragon, which has continued with the likes of Dungeons & Dragons (2000), Reign of Fire (2002), D-War (2007) and Eragon (2007), which has been far more successful in terms of effects but still not in terms of box-office, at least up until The Hobbit: The Desolation of Smaug (2013) and The Hobbit: The Battle of the Five Armies (2014).

Both Dragonslayer and DragonHeart are decent films and comparison between the two is interesting. Both are films about the last dragon and its relationship with its slayer. Dragonslayer comes with the full primal majesty of the myth. It is a sorcerer’s apprentice story about the novice finding the heroism necessary to take on almost impossible odds. On the other hand, DragonHeart lets its dragon talk, gives it a personality and trades the sorcerer’s apprentice in for an opportunistic fallen knight.

In an inspired reversal of expectation, DragonHeart has the knight and dragon team up to form a Butch and Sundance relationship of sorts, conning their way across Mediaeval England, fooling nobles and peasantry alike into paying for the privilege of ‘killing’ the dragon. The film gets its best mileage out of this odd couple relationship, which becomes a sparring duel of taunts – more St George and Mildred than St George and the Dragon. Although in the end it is very much a Hollywood dragon film – this seems more a dragon film born more of Lethal Weapon (1987) (where the jokey friendship comes from) than of epic legend.

The dragon effects are impressive – although try as Industrial Light and Magic might, they cannot help but make the dragon look like a big cartoon figure. Nevertheless, Sean Connery is an inspired voice casting choice and gives life to the dragon. Director Rob Cohen [whose last draconian outing involved Eastern rather than Western dragons – namely Dragon: The Bruce Lee Story (1993), a film that was almost as much fantasy as DragonHeart in its mythologizing of Bruce Lee’s life] has a nice eye for effects shots – the dragon going down in the lake, one gorgeous shot of it rising up from behind a hill silhouetted against the sun.

There have been a series of sequels with DragonHeart: A New Beginning (2000), Dragonheart 3: The Sorcerer’s Curse (2015), a prequel to this film, Dragonheart: Battle for the Heartfire (2017) and DragonHeart: Vengeance (2020).

Screenwriter Charles Edward Pogue has also ventured into genre material on a number of occasions with the scripts for works like The Hound of the Baskervilles (1983), David Cronenberg’s The Fly (1986), Psycho III (1986), Kull the Conqueror (1997) and Hercules (tv mini-series, 2005). Co-writer Patrick Read Johnson has directed several films including Spaced Invaders (1990), Baby’s Day Out (1994), the children’s Halloween tv movie When Good Ghouls Go Bad (tv movie, 2001) and ’77 (2017) about Star Wars fandom.