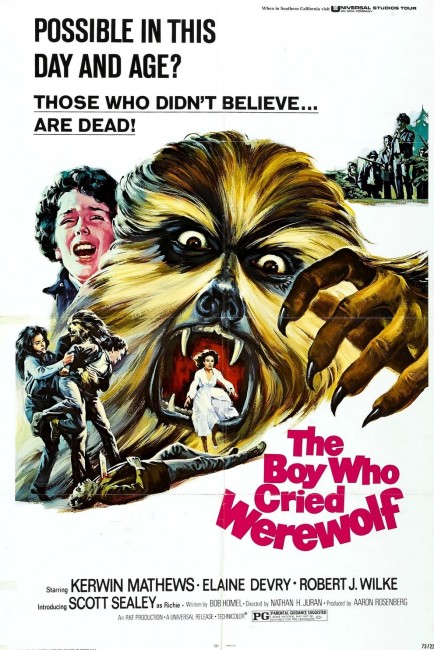 Young Richie Bridgestone is holidaying with his father up at their mountain cabin when they are attacked by a wolf. Mr Bridgestone succeeds in throwing the wolf over a cliff and impaling it on a road sign where they see it turn into a man but not before it bites him. Later Richie’s father laughs at the idea that it was a werewolf and puts what they saw down to Richie’s overactive imagination. However, when they return to the cabin the following month, Richie’s father transforms into a werewolf under the full moon.

In the early 1970s, the horror genre underwent a belated effort to modernise old themes. There were a number of attempts to update the vampire film into the modern day with the likes of Count Yorga, Vampire (1970), Dracula A.D. 1972 (1972) and The Night Stalker (1972). The Boy Who Cried Werewolf was part of a minor attempt to revive the werewolf genre – but one that only succeeded in showing how old hat the idea was. At best, as clearly evidenced by the title, the idea had become so hoary it was more of a joke.

There were one or two other films around at the same time – Werewolves on Wheels (1971), The Werewolf of Washington (1973) and The Werewolf of Woodstock (1975) – that similarly tried to do something with the werewolf genre by conducting bizarre/jokey conceptual melanges of ideas. It was not until the likes of The Howling (1981) and An American Werewolf in London (1981) a decade later that the werewolf was dragged howling into the modern day with any success.

The title of the film seems to promise a light-hearted treatment but The Boy Who Cried Werewolf is deadly dull in every respect. The promied jokey treatment begins and ends at the title and the rest of the film is played straight. In this respect, it is shabbily made B movie. The script is written to convenience – like how the boy and his father only ever contrive to go up to the mountain cabin when it happens to be a full moon. The makeup job makes the title creature look more like a chihuahua than a werewolf and succeeds in engendering about as much threat as a dog food commercial.

Director Nathan Juran and Kerwin Mathews once teamed on the great The 7th Voyage of Sinbad (1958) – how the mighty have fallen. Scriptwriter Bob Homel makes a bizarre appearance as the guru of a religious cult.

The Boy Who Cried Werewolf (2010) was a tv movie remake for the Nickeloden children’s channel where the only resemblance with the original was the title.