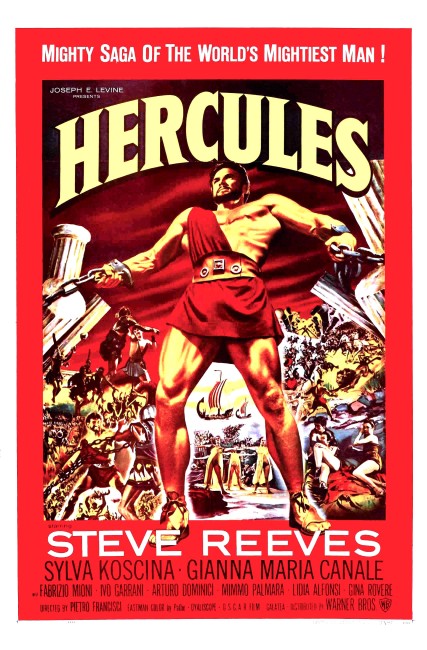 The mighty Hercules rescues a woman on a runaway chariot. This turns out to be the Princess Iole. Hercules escorts her home where he is welcomed by her father Pelias who has assumed the throne following the murder of her uncle, the good King Aeson. Love grows between Hercules and Iole. Hercules then meets Iole’s cousin Jason, the rightful heir to the throne. Pelias disbelieves Jason is who he claims and so Hercules and Jason mount a mission to retrieve the kingdom’s sacred Golden Fleece, which Jason has placed in hiding on the island of Colchides. On the journey, they must deal with the lure of Amazons, Pelias’s assassins, mutinying crews, beast men and dragons.

Thanks to an enormous promotional campaign by US promoter Joseph E. Levine, this Italian-made film became a big hit when it was released internationally in 1959. Its success spawned a vast series of Italian-made imitators throughout the 1960s – some forty odd Hercules films were made, not to mention whole copycat series of Atlas, Samson, Goliath, Ulysses and Maciste muscleman epics. Indeed, the Italian muscleman adventure has become its own genre, nicknamed the peplum (the Italian word for tunic) or known more colloquially in Hollywood as the ‘sword and sandal’ film.

Hercules is much better budgeted than any of its imitators – surprisingly, it has somewhere in the neighbourhood of an A-level budget, which allows for some impressive sets. Its appeal was in taking the stuff of the 1950s Hollywood Biblical epic – widescreen scenery, the massive sets, the men in loincloths, the pseudo-historical pageantry, the barbarian armies lined up – and in reducing it to a comic-book pulp.

The film aspires to nothing other than a P.T. Barnum outlook on cinema as some kind of circus attraction. The spectacle – the swordplay, the wrestling, the romance – all has its own naively earnest charm. All the men – except for the villains – bulge at the biceps. And to match its fantasy of male beefcake, the women languish in diaphanous gowns – the interlude on the isle of Lemnos where the men lounge in paradise as the women squeeze grapes into their mouth is this kind of film’s idea of the perfect fantasy. Even the staid woodenness of former bodybuilder Steve Reeves’s acting works for rather than against the film.

The action mostly tends toward the stolid and the film is much longer than it needs to be. Nevertheless, there are times when it even exceeds its own expectations – like the climactic sequence where Hercules (taking a leaf from Samson) succeeds in ripping his chains out and then swings them around his head, sweeping aside attacking soldiers, before wrapping the chains around the pillars of the temple and bringing it collapsing down on an attacking cavalry troupe.

When it comes to the mythic elements of the Hercules story, the film’s approach is resolutely non-fantastic. The Nemean lion and the Cretan bull turn up but these are no more than ordinary lions and bulls that Hercules has to wrestle. (These are the only two of Hercules’s traditional Twelve Labours to appear throughout). The only fantastic elements to appear are the dragon of Ares that guards the Golden Fleece (a very unconvincing and misbegotten special effect) and The Sybil who is of vaguely oracular persuasion. It is indicative of the film’s indifferent attitude toward the original myths that the story of Hercules is largely taken over by what is traditionally the story of Jason and the Argonauts.

The direct sequel, by the same creative team and also starring Steve Reeves, was Hercules Unchained (1959). There are an enormous number of other Italian-made Hercules films, even films featuring other mythological musclemen that were retitled as Hercules films for English-language release, although none of these are directly related to this film.