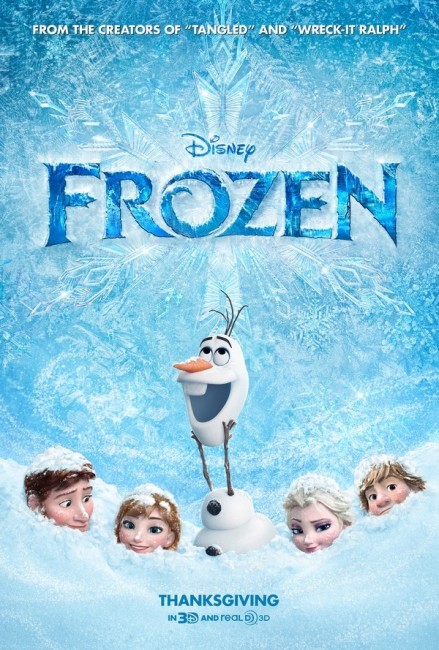 Anna and her elder sister Elsa grow up together as the daughters of the king and queen of Arendelle. Elsa has the magic ability to freeze things, only for her to accidentally freeze Anna while they are playing together. The king and queen go to the trolls to beg them to save Anna’s life. The trolls are able to do so by removing all memory of what happened from Anna’s mind. They tell the king and queen that Elsa must be kept away from people for her own good. Anna is heartbroken when Elsa locks the doors of her room and refuses to play with her. Not long after, the king and queen are killed when their ship sinks at sea. Several years later, Elsa is about to be crowned the queen and the gates of Arendelle opened to the rest of the world for the first time. Among those come for the coronation, Anna is enchanted by the handsome Prince Hans from the Southern Isles. They dance at the ball and she eagerly accepts his proposal. However, when they break the news to Elsa, she loses control of her freezing magic to the shock of everybody at the ball. Thought a witch by those present, she flees into the wilderness. Anna, aided by the ice packer Kristoff, heads out to bring Elsa back as her magic causes the entire kingdom to become covered in winter.

Frozen was the 53rd animated film from Disney. It is in fact an adaptation of Hans Christian Andersen’s fairytale The Snow Queen (1845), although you would not know it unless you watch the film’s end credits, so little does this feature in the film’s publicity. The studio had planned to make an adaptation of The Snow Queen since the 1990s. This passed through several iterations and changes of director, and as recently as 2010 was a go project that ended up being abandoned. The problem with these versions would appear to be difficulty getting the character of the Snow Queen right, which one is kind of surprised about as, according to the story, she should emerge as a standard Disney evil witch in the vein of Snow White and the Seven Dwarfs (1989), Maleficent in Sleeping Beauty (1959) and Ursula in The Little Mermaid (1989).

Hans Christian Andersen, were he alive today, would recognise little of his story in Frozen. The original The Snow Queen concerns itself with two young children, Kai and Gerda. One day, Kai gets a shard from the Snow Queen’s mirror in his eye that causes him to change and become mean-spirited. He is taken away to the Snow Queen’s palace at the North Pole and Gerda must venture forth on a quest to rescue him.

The film entirely changes the characters. There are no equivalents of Kai and Gerda and no magic mirror. The Snow Queen is substantially rewritten as the character of the older sister Elsa but she is more sympathetic than evil – just someone with a freezing power that she has yet to control, whereas the fairytale’s Snow Queen controlled all of winter and was in league with The Devil. The Snow Queen has no sister in the fairytale, although Anna sort of goes on a journey that approximates Gerda’s quest. In fact, the only other character that vaguely even approximates anybody in the story is that of the reindeer that accompanies her, although here it is not a talking animal. The Snow Queen has been filmed numerous times – see other versions listed here such as The Snow Queen (1995) and Snow Queen (tv mini-series, 2002).

Frozen comes from Chris Buck, who previously co-directed Disney’s Tarzan (1999) and Sony’s Surf’s Up (2007), and newcomer Jennifer Lee. Lee is an interesting choice in that her only prior credit had been as the co-writer of Disney’s previous animated feature Wreck-It Ralph (2012). Clearly mindful of the accusations levelled at Pixar in recent years – that they had were an exclusive boy’s club that did not admit woman directors, not even featured any lead female characters, Jennifer Lee was sprung ahead of the queue to become a full director here despite her lack of experience. Certainly, the results worked far more harmoniously than with Pixar’s attempts to employ a woman’s touch on Brave (2012) that ended with Brenda Chapman quitting over creative differences and the film being a beast with two heads that didn’t work on screen.

The animation has a sweep that looks good in the 3D format, even includes some occasionally lovely images like where Elsa freezes the surface of a lake as she flees out across it. The characters end up being likeable. Anna is eventually a character whose emotional arcs as to who she can trust and her quest for familial conciliation works with a reasonable degree of strength and humour. There is the immensely endearing sidekick of the snowman Olaf who you want to instantly rush out and buy as a collectible figurine. It is a Disney film that you could say readily pushes all of the requisite buttons with an audience. It is also the first Disney film in more than a decade to feature songs, most of which pass by amiably enough.

On the other hand, there is also a good deal of Frozen that feels like formula. The theme of sisterly conciliation never comes with a great deal of depth, while Anna’s romantic arc of falling for the wrong guy while failing to see the one right under her nose is a tried and true one. Also the sidekicks seem more grafted on that anything else – Olaf the snowman who dreams of revelling in the sun without knowing what it is steals much of the film but you also wonder why he is there, his presence never seems to organically grow out of the plot, rather feels as though someone in the story team made the executive decision that we need to boilerplate on a standard animation sidekick here. The same goes for the trolls – they seem there as plot deus ex machina rather than exist as part of a world where the mythological sits alongside a Scandinavian kingdom.

On the whole, Frozen works amiably enough – better than recent Disney fairytale princess efforts like Tangled (2010) and Brave, a couple rungs below The Little Mermaid and The Princess and the Frog (2009), but never coming anywhere near the pantheon of their animated greats.

Frozen was hugely successful and became the highest-grossing animated film of all time. Frozen II (2019) was a sequel. Anna also makes a cameo appearance in Ralph Breaks the Internet (2018).