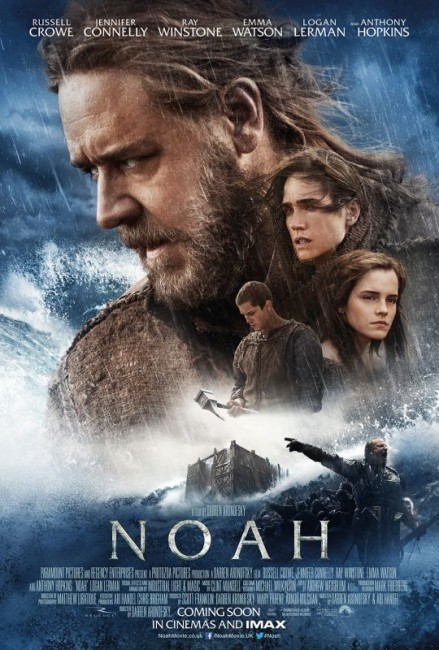 Following the Fall of Man at the Garden of Eden, the children of Adam and Eve have spread throughout the world. In the East, Adam’s son Cain has given birth to a great but corrupt civilisation. Leading a simple life in the West, Noah is given a vision that The Creator will bring a vast flood to wipe out the wickedness of man. Fallen angels that have been trapped in bodies of stone come to Noah’s aid, while The Creator causes a forest to spring up around them so that he can build a vast ark. Animals of every species soon come so that two of each can be taken aboard the ark. At the same time, also comes Tubal-cain, the warlike descendant of Cain, who defies the miracles he sees before them. The floods come and the ark is set afloat with Noah and his family aboard. However, when his son’s wife is found to be pregnant, Noah realises that he must kill her child because The Creator is wanting to destroy mankind, not proliferate it. Meanwhile, a murderous Tubal-cain has stowed away aboard the ark and is determined to turn Noah’s son Ham against him.

Darren Aronofsky is a director who has risen to some acclaim in recent years, beginning with the festival hit of his debut film, the reality-bending Pi (1998) and continuing with the critical accolades of his drug addiction drama Requiem for a Dream (2000). Aronofsky’s projects never receive less than critical fascination – from his cross-time film The Fountain (2006) about the quest for immortality to The Wrestler (2008), which won an Academy Award for Mickey Rourke to the ballet psycho-thriller Black Swan (2010), which did the same for Natalie Portman. Subsequent to Noah, Aronofsky went on to make the surreal horror film Mother! (2017).

Darren Aronofsky has followed a career path that has gone from the indie arthouse to arrive at reasonable mainstream success with Noah. Noah could be said to be a big studio film – it comes headlined by some major names (Russell Crowe, Anthony Hopkins) and has been given the budget that is usually afforded to a mainstream blockbuster – yet is made with an indie sensibility. This was reflected in the studio’s uncertain handling of the film. Even though they gambled some $140 million on the film, the studio was very timid and uncertain when it came to the promotion and release.

Noah came surrounded by enormous controversy even before it opened. Various voices in the Christian blogosphere condemned the film for everything from liberalities taken with the Biblical story to aspects such as Aronofsky’s determination not to refer to God throughout but The Creator (an untrue claim) and that we see Noah getting drunk (an aspect of the story that is actually in The Book of Genesis). Conservative Christianity leapt on many aspects such as the film’s black-and-white divide where Noah (and by implication the side of God) is associated with environmentalism and vegetarianism, while Tubal-cain’s bad guys are seen as industrialists, meat-eaters and claim ownership of the Earth.

There was even a strong evangelical campaign to boycott the film, while it was banned outright in several Islamic countries. This clearly presented a big headache to the studio’s marketing department where they ended up screening different cuts of the film, which were made without Darren Aronofsky’s approval, for church groups (who all reacted negatively no matter which version they saw) before the studio decided to release Aronofsky’s original cut anyway. Elsewhere, the film went out without any previews for regular critics. Despite this, the box-office for the film was surprisingly good suggesting that its appeal lay more with non-believers.

I approach Noah unconcerned by all of this. I hold no religious beliefs and so to me Noah is no different to a piece of cultural legend. In other words, it is a film I am reviewing in the same way I would an adaptation of The Odyssey or the legends of King Arthur – as a work of fantasy based on the legends of a particular world culture, not as literal history as many of the aforementioned religious groups do. Thus from my perspective, I am unconcerned whether Darren Aronofsky is faithful to the Biblical story; the only real concern is whether he makes an interesting film or not.

In this regard, you have to celebrate what Darren Aronofsky is doing. He has determined not to make a Biblical spectacular a la The Ten Commandments (1956), King of Kings (1961) or the more recent Son of God (2014) – Christian sceptics had a field day with his comment about Noah being “the least Biblical Biblical film ever made.” The film that the church groups seem to be wanting Aronofsky to make is one that upholds their faith – contains a humbled reverence for The Almighty and a clean, morally uplifting message.

Aronofsky is interested in none of that. In the film, Noah is not a righteous man but someone morally troubled and even prepared to go so far as to murder his own grandchildren at one point (not that that is too different from any Old Testament prophet). What seems to have escaped many critics is that Aronofksy is not even a Christian so you can hardly come down on him for failing to tap into and promote someone else’s religious worldviews. Moreover, in that Christian groups seem highly upset that Aronofsky has messed with what they regard as their story, they seem to neglect the fact that the story of Noah is a taproot that straddles Christendom, Judaism and Islam.

The issue of great upset to many is that Aronofsky adds a good deal to the Biblical account. There should be no particular issue with the angels or of a drunken Noah as these are both aspects that are described in the Biblical account. More so are some of the dramas that happen aboard the ark. The problem with the story of Noah is that there is not a great deal of drama to it once the ark is launched – they simply sail the seas for forty days and nights and then find land. You can sympathise with Aronofsky’s desire to add to this to make an interesting story and create conflict, although these additions border on the melodramatic – a stowaway Tubal-cain trying to turn Ham against Noah and Noah wanting to murder his grandchildren to ensure the extermination of the human race.

Some of the additions are undeniably subversive – like the vision of the continents at the beginning being of Pangaea, which implies an evolutionary view of the humanity. Even more so is the reinvention of Noah as an ecological defender – guarding the natural Earth against Tubal-cain and his men who are murderers, meat eaters and espouse a vicious social darwinism in terms of brutally taking what one wants.

In the end though, Noah is a mixed film. It is not the spectacular I expected. For a film with a $100 million+ budget, not too much of it shows up on screen – we see little of the corrupt civilisation or of the big apocalyptic flood with cities being wiped away. The film does entertain with its images of big, bulky and awkward stone angels – almost everything we expect an angel not to be – and in particular the scenes where they are fighting off the tribes of Tubal-cain where Aronofsky seems to want to create an epic-sized battle – you could easily imagine this as a sequence transplanted from one of Peter Jackson’s Lord of the Rings films.

I liked the way the character arc of the story was written, of Aronofsky’s determination to dig deep inside the issues of Noah’s moral drive, the questions of whether he will murder his grandchild, of Ham’s indecision between the two camps. On the other hand, Russell Crowe’s glowering never makes for anything that goes beyond the writing of the character. The first half feels like a film stretching to be epical yet never quite fills the canvas it has chosen for itself, while the latter half deflates this to a peculiarly dour arkboard chamber drama that feels like it is awkwardly aching to grasp big moral issues but where Aronofsky and the actors never seem to find the emotional life of the material. In this regard, Aronofsky leaves Noah a strangely moribund film. The crucial difference is that I liked what Aronofsky was trying to bring to the legend but I never felt moved by it.