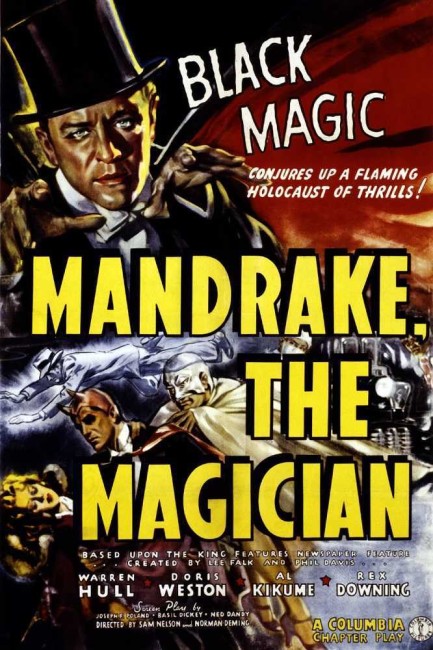 The celebrity stage magician Mandrake returns from a trip to Shanghai. He has obtained a source of the rare mineral Platonite. He intends to use this to power the Radium Energy Machine invented by Professor Houston, the father of his girlfriend Betty. Before the ship even docks in California, agents of the masked criminal known as The Wasp attempt to kill Mandrake. The Wasp’s men then steal the machine and abduct Professor Houston. They have reckoned without Mandrake, aided by his trusty assistant Lothar, who goes into action using his arsenal of magic tricks to stop them.

Mandrake the Magician was a comic-strip from King Features Syndicate that appeared in syndicated newspapers. It was created by Lee Falk, who later went on to create The Phantom. The strip first appeared in 1934 and ran until 2013. Mandrake was a stage magician who would fight crime and various menaces, along with the help of his loyal African servant Lothar. Mandrake had great powers of illusion – throughout the history of the strip, these varied between whether he was just an adept hypnotist or actually had real magic powers. This has led some commentators to label Mandrake as the first comic-book Superhero, although the changing nature of the actuality of Mandrake’s powers places a question mark over this.

This was Mandrake’s first appearance on film. There was also a radio show shortly after this that ran between 1940 and 1942. Subsequently, there was Mandrake (1979), a pilot for a tv series that aired on NBC starring Anthony Herrera as Mandrake and Ji-Tu Cumbuka as Lothar, although this failed to go to series. Mandrake appeared, alongside The Phantom and Flash Gordon, in the animated tv series Defenders of the Earth (1986-7). There have been occasional efforts to launch a big screen Mandrake film, currently one announced to star Sacha Baron Cohen.

Mandrake, The Magician was a Serial adapted from the comic-strip that screened in twelve weekly chapters. It was one of a number of Comic Book Adaptations conducted during the serial era, beginning with the successful Flash Gordon (1936) and continuing through Dick Tracy (1937), Buck Rogers (1939), Adventures of Captain Marvel (1941), Batman (1943), The Phantom (1943), Captain America (1944) and Superman (1948). The two complaints that could be made about these adaptations is that the exploits associated with the comic-book counterparts came out impoverished when conducted on serial budgets. The other would be that they frequently abandoned comic-book canon. The Flash Gordon serials, The Phantom and the two Superman serials emerged well but there were some notorious examples where it did not – most notedly the first Batman serial and Captain America.

Mandrake, The Magician falls on the side of those serial adaptations that treat the comic-book source material very liberally. In the comics, Mandrake has great powers of illusion where he could fool evildoers into thinking he is doing amazing things. By contrast, the Mandrake here is no more than a stage magician who solves crimes. There is a serviceable sequence in the first episode where Mandrake puts on a magic show. Elsewhere, he very occasionally does some parlour tricks – the repeated one of throwing smoke bombs and disappearing during the midst, or more banally pulling coins from people’s ears. Mandrake is cast with the very ordinary looking Warren Hull who wears a tuxedo some of the time but lacks Mandrake’s distinctive top hat, shoulder cloak and pencil moustache. Lothar is not the African prince he is meant to be but has been cast with Hawaiian actor Al Kikume.

The great disappointment of Mandrake, The Magician is that you could almost entirely drop Mandrake’s name from it and most of it would just play as a regular crime melodrama of the day. As such, it conforms to all the serial clichés – of there being a central McGuffin device and a rare mineral needed to power it that everybody is chasing after and seeking to obtain, steal or retrieve, along with assorted kidnappings, attempts to kill Mandrake and ruses set up by Mandrake to fool the criminals. The mastermind behind everything falls into another trope of the serial – the masked Super-Villain known as The Wasp (who only communicates via an early tv broadcast system that comes across via radio) and a whodunnit where The Wasp’s identity is unveiled in the last chapter as one of the people around Mandrake.

The cliffhangers, almost one of the best parts of a serial, are some of the most routine of any serial. They are generic ones of Mandrake trapped in a crashing plane or an explosion that blows up the laboratory, The Wasp training the death ray on a radio station and causing the building to collapse, Betty trapped in a collapsing elevator and so on. The best of these is a sequence where Mandrake jumps aboard an open cage hanging from a hook that is winched across a gorge where he engages in a fistfight with the goon there before the cage comes free from the hook and goes plunging down into the ravine.

Serials were also noted for their vigorous fight scenes but the ones here are routine with nothing special about them. There is one good sequence with Mandrake getting into a fight in a nightclub that for some reason has a full-size operational millwheel in the middle of its floor – only to get knocked out and dragged down, caught up in the cogs of the wheel, before the next chapter reveals that he simply came out the underside that opens into the room beneath.

Some of the gadgetry is rather amusing. At one point, Mandrake gets to torture a suspect with an electrical device to get a confession out of him. There is also the gate of Mandrake’s mansion where, rather than any ordinary buzzer, a device like a lamp comes down on a cable from above and opens to contain a telephone so that people can call to be let in. The same episode also has the quaintly amusing scene where the bad guys tap Mandrake’s phone by physically splicing a cable into Mandrake’s phone line.