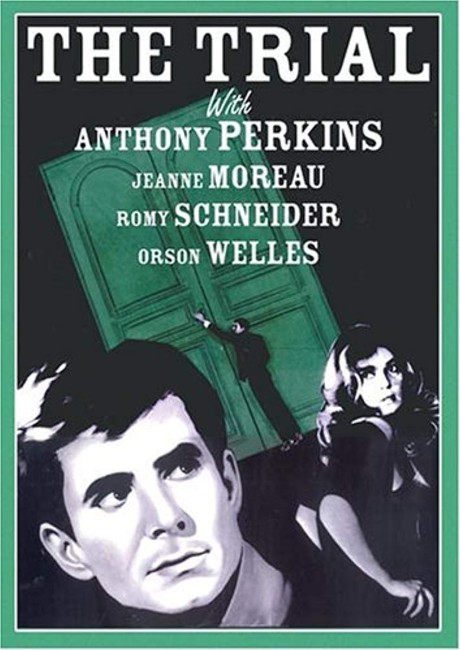 Clerk Joseph K is woken in the morning by police and told he has been placed on trial. However, he is not told why and his attempts to find out are regarded as suspicious. In his subsequent efforts to understand the nature of his crime and to obtain a lawyer, he finds himself caught in a labyrinth of legal obfuscation and nonsensical double-talk.

The output of Franz Kafka (1883-1924), a Czech-born Jew, is small but nevertheless of immense literary importance. All of Franz Kafka’s work features banally ordinary figures trying to make sense of a world that is governed by bizarrely inexplicable rules and giant implacable machines of power. “Kafka’s novels,” says genre critic Franz Rottensteiner, “move in a circle, and their helpless heroes are caught in the fabric of a world that is ever elusive to them. They are mere cogs in a senseless social machine.”

Orson Welles (1915-85) is celebrated as one of the greatest of all film directors. The young Welles emerged as a highly successful theatre and then radio director in the 1930s. He made his first film with the legendary Citizen Kane (1941), acclaimed as one of the greatest films of all time. Welles’s directorial career thereafter remained a highly uneven one. he made a number of other films, including The Magnificent Ambersons (1942), The Lady from Shanghai (1947), Touch of Evil (1958), Chimes at Midnight (1965) and the legendary posthumously completed The Other Side of the Wind (2018), as well as an even greater number of uncompleted projects. All of these were dogged by budget overruns, budget shortages and other assorted problems, such that Welles gained a reputation as difficult and unreliable genius.

Here Orson Welles makes an adaptation of Franz Kafka’s posthumously published Der Prozess (1925). He was given funding by Alexander Salkind, later the producer known for the Christopher Reeve Superman (1978) and sequels. Welles shot the film in a variety of European locations, principally Zagreb and Paris.

The opening of the film is marvellously sustained Kafka – with Anthony Perkins being woken by interrogators who question and accuse without ever saying what they want, with his innocent replies about threatening to file complaints being turned around and used as excuses for him to come down to the station, and his protests that there is no such word as ‘ovular’ being treated as suspicious when he uses it himself a moment later. Unfortunately thereafter, the film starts to wander all over the place and rarely maintains the nightmarish blackness of its opening moments. Orson Welles loses focus on the story – it seems to degenerate more into encounters with various women. (The 1993 adaptation had a much better grasp of the Kafka story than this film does).

Where the film does succeed is in terms of Orson Welles’s breathtaking visual flair. Welles has been called one of the greatest of all directors, although the films that people always point to are Citizen Kane (1941) and Touch of Evil (1958) and The Trial is one of his less recognised. It is perhaps one of the most stunningly directed and photographed black-and-white films ever made.

Welles uses architectural space to create a disturbingly claustrophobic vision of a person surrounded by conformity and emptiness – Anthony Perkins works in an office that is one vast factory filled with hundreds of desks and the effect when everybody gets up and files out in unison in the background of a shot is striking; the courtroom is packed with multiple tiers containing hundreds of people – again the effect of them all standing up at once as Welles turns his camera around startles. Welles’s choice of echoingly empty classical locations throughout Europe – of rooms filled with waste paper or overspilling files and baroque lighting schemes – makes the film seem as though it were taking place in a decaying dream labyrinth of almost but not-quite familiarity.

The Franz Kafka story was remade as the also worthwhile The Trial (1993).