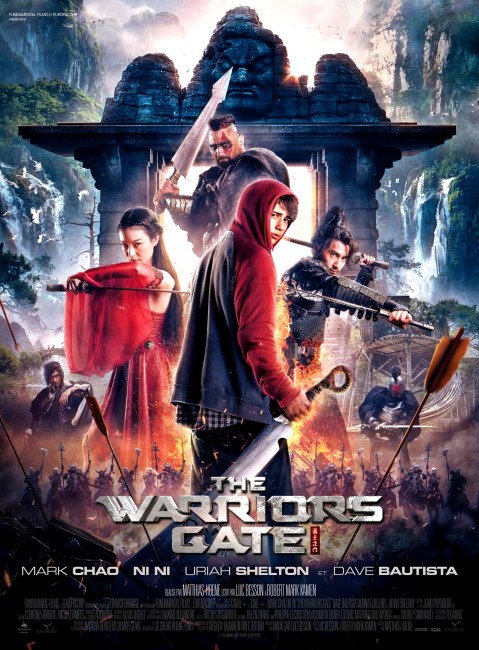 aka Enter the Warriors Gate

Jack Bronson is an average high school kid in New Westminster. He lives with his mother who is struggling to make mortgage payments and is unhappy that Jack spends all his time videogaming. Jack has a part-time job with Mr Chang, a Chinese importer. Mr Chang gives Jack a basket with an elaborately carved crest. Jack is startled when the warrior Zhoo appears out of the basket, believing Jack to be his fearsome videogame avatar The Black Knight. Zhoo entrusts the Princess Su Lin to Jack for safekeeping. Jack must then try to blend Su Lin in as a modern girl, at which she is decidedly out of place. Warriors then appear and snatch Su Lin. Jack ventures through the portal in the basket to Ancient China where Su Lin is being held by the warlord Arun the Cruel who is determined to marry her before she is crowned empress. Joined by Zhoo and aided by an eccentric wizard, Jack sets out to rescue the princess, taking on an entire army despite the fact he has no fighting skills.

The Warriors Gate was a film from Luc Besson, the French director of films like Nikita (1990), The Professional/Leon (1994), The Fifth Element (1997), Valerian and the City of a Thousand Planets (2017) and producer of dozens of others in the last decade including the Taken and The Transporter franchises. Besson co-produces and co-writes the film with Robert Mark Kamen, the writer of the original The Karate Kid (1984) and Gladiator (2000), as well as number of Besson directed and produced scripts including The Fifth Element, The Transporter (2002), Taken (2008) and sequels, and Colombiana (2011). Besson has handed the director’s chair to German director Matthias Hoene who previously made the zombie comedy Cockneys vs Zombies (2012).

With The Warriors Gate, Luc Besson and Robert Mark Kamen have done nothing more than rehash The Forbidden Kingdom (2008), the disastrously tone-deaf attempt to appropriate/homage the Shaw Brothers martial arts film and Hong Kong Wu Xia cinema of the 1980s. That and maybe a few dashes from The Last Starfighter (1984) in which a kid who is a videogame junkie is transported into the middle of a real war, being mistaken for a great warrior because of his skill.

Besson and co have clearly not seen that The Forbidden Kingdom was regarded as a critical disaster due to the very reasons that they readily replicate here – the focusing of a martial arts film around a badly out of place white kid (and cast with an actor who has no skill in martial arts); the appropriation of the Hong Kong/Chinese tradition of the martial arts film by people who are incompetent at staging combat scenes with any of the elan that the directors working in the original Shaw Brothers fad and their modern successors do; and the need to pitch everything so that the film can be ‘gotten’ by modern teenage kids.

The Warriors Gate is an appallingly bad film, even more so than The Forbidden Kingdom was. Some of the worst scenes are the ones where princess Ni Ni comes through into the contemporary world. Here the film aims for some fish out of water humour but the scenes with her breakdancing at a mall or turning up dressed hip (where apparently Uriah Shelton, despite he and his mother struggling to pay the mortgage, can afford to outfit her out of his own pocket at one of the high-end fashion boutiques at Vancouver’s Metrotown mall) feel exactly like middle-aged men trying to strike a teen vibe without having a clue what teenagers consider cool.

It is a script where sitting and thinking about any aspect of it for five seconds causes it to collapse into the ridiculous – how do people from Ancient China emerge speaking English? How exactly does a Chinese warrior with no idea what a computer is mistake a modern teen kid for his videogame game avatar? How do two unarmed kids manage to defeat an entire army?

We get lame comedy relief with scenes of Dave Bautista as a warlord giving orders that are mistakenly taken by a subordinate as commands to kill the person in front of him. The film seems to have borrowed its hero from Big Trouble in Little China (1986) – a Westerner with no skills who bumbles his way into martial combat. The character even seem to be intended as a homage – they even have similar names in Jack Burton/Bronson. On the other hand, there is no sense of the film here subverting heroic cliches as we had in Big Trouble.

Even worse are the scenes once we get into dynastic China. Why Besson and co could not have hired a Chinese director who is used to this sort of material but instead chose to go with a director who had only previously made a single film (and not in the action genre) is one major miscalculation about the exercise. The action scenes are ridiculous. At one point, Mark Chao’s method of dealing with a horde of attacking soldiers is to stand and wait until a sufficient number of them have entered a room whereupon their combined weight causes a neat circular hole to collapses in the floor, plunging them into the room below.

During the climactic battle scenes, the film has the two teens – Uriah Shelton and Ni Ni – in the midst of combat and defeating dozens of soldiers despite the fact that they have no armour or weaponry of any kind where they appear to triumph by simply pushing their armed and armoured attackers aside. (In any real combat situation, they would be killed in about ten seconds flat by one of the sword and spear-wielding solders).

You suspect that these scenes were subject to a dictum somewhere in the process that mandated that children could not be shown wielding weapons, whereupon you wonder why didn’t they either sideline the kids or come up with some alternative like having them wield magic. The results are so absurd as to cause the entire film to collapse into the utterly ridiculous.