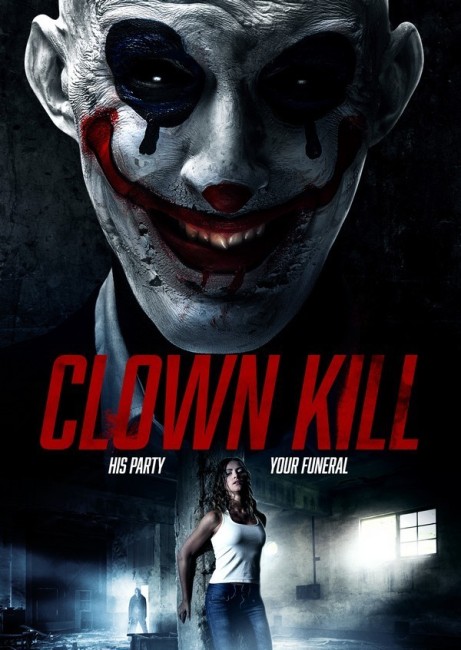 While out on a work drinks evening, someone spikes Jenny’s drink and she is then raped in a bathroom cubicle by someone dressed as a clown. Six months later. Jenny is asked by her boss John to complete an important presentation by the morning. This requires that she spend the night at the office working on it. At the same time, Jenny is being followed and harassed by the creepy building handyman Cyclops so nicknamed for his scarred and disfigured face and one eye. As the regular staff go home for day and Jenny settles in to work, the same clown starts stalking the building, killing those that remain.

Lock In, which was retitled Clown Kill for wider release, was the first fiction work from Mark Howard, a filmmaker from Lancashire, England. Howard has worked in commercials, documentary work and made several short films prior to this.

Clown Kill is amateurish and painful to watch. The film appears to have been shot entirely by natural lighting. Despite Mark Howard claiming to have been making films since the mid-1990s (two decades), his directorial set ups are like those of kids playing at home movies with their parents’ camcorder. (Nobody takes a cinematography/videography credit on the film, no doubt out of shame). For the bulk of the show, Mark Howard appears to have obtained the use of an office building and has various creepy figures and a killer clown stalking and killing people who are working late in the building.

The one plus side of the film is that Mark Howard lets many of his actors improvise and left to themselves they come up with some amusing monologues – be it the security guards talking amongst themselves with one exaggerating his exploits, the other revealing he is afraid of actually going into action and wetting his pants when he does; or else The Supervisor who delivers a monologue to employees and in a surreal touch then turns to talk to a girl he keeps under his office desk.

The film shoots itself in the foot with an improbably contrived ending where [PLOT SPOILERS] much of what has happened is shown to be a set up before everything is revealed to be an hallucination being experienced by Jessica Cunningham while in a coma.