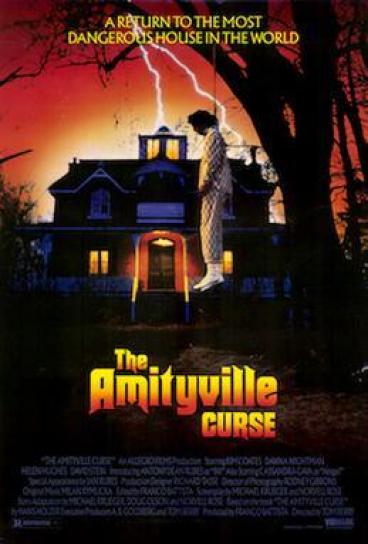 A couple find the Amityville house going cheap and buy it, unaware of its past. They move in with a group of friends to renovate it, but soon face hauntings and premonitions. They discover that the supernatural happenings are connected to the murder of a neighbourhood priest many years before and come to realise that the murderer is one of their group.

This news of the hoax failed to deter a series of sequels from turning the Amityville series into yet another horror franchise – although appropriately by the time that this was made, the series has long passed making any pretensions as to any of it having actually happened. Unlike other franchises such as the Howling or Witchcraft films, Amityville is not a title that has been copyrighted – rather difficult to do considering that Amityville is a real town – so all the Amityville titles subsequent to the third film have been made by different companies hoping for a slice of the action.

The Amityville Curse is not even an American film but is a Canadian film posing as being set in the US. It is certainly the dreariest of all the Amityville titles. The film has potentially more plot than any of the other Amityville films – there being a good idea of combining the haunting with a whodunnit. However, the film looks cheap – the photography is drab. The effects shabbily unconvincing – cheap facial appliances and would-be spooky effects like a face seemingly pushing through a wall in the cellar that looks just like a face pushing against rubber. As a haunted house film, it is completely lacking in atmosphere. The revelation of the identity of the killer is obvious from the outset.