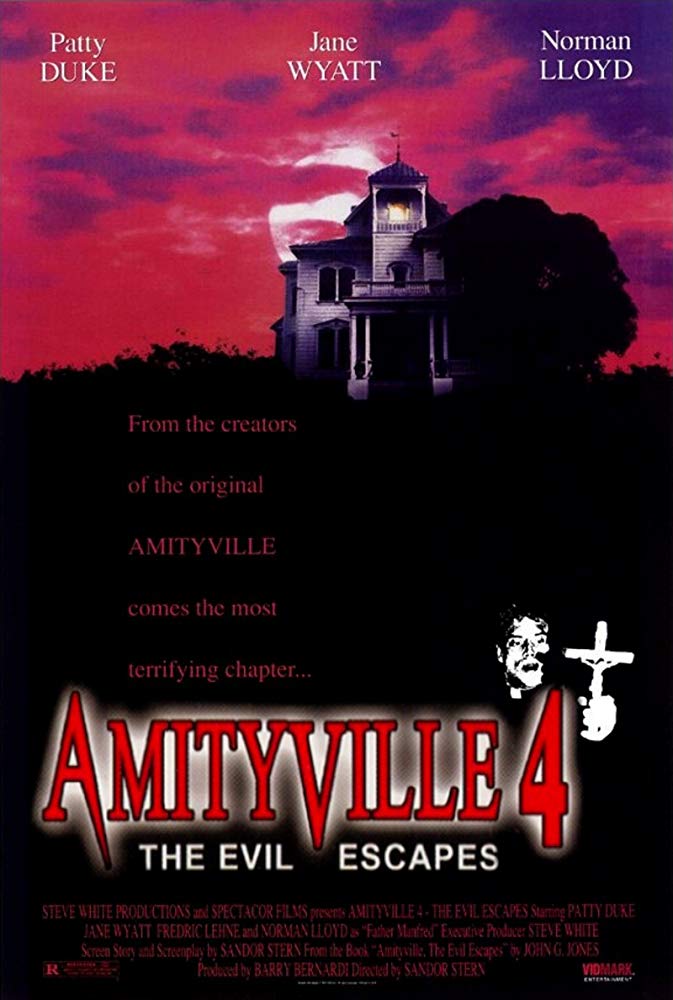 A team of priests finally succeed in exorcising the Amityville house. Soon after, the furnishings from the house are sold off in a yard sale. Helen Royce buys a lamp from the sale and sends it to her sister Alice Leacock in Dancott, California. The lamp arrives just as Alice’s daughter Nancy and her three children move in with Alice to alleviate financial pressures following the death of Nancy’s husband. Soon the lamp starts to spread its evil throughout Alice’s house, causing numerous accidents and deaths.

Amityville: The Evil Escapes was the fourth of the films that began with the enormous success of the theatrically released The Amityville Horror (1979). The first film and its’ (later proven to be bogus) claims to be based on truth caused a considerable sensation at the time. There were two theatrically-released sequels to this with Amityville II: The Possession (1982) and Amityville 3-D (1983), as well as a good many other unofficial claimants to the Amityville title (see below). Amityville: The Evil Escapes was the fourth and last of the official Amityville films. It was made as a tv movie and released to video under several different titles. The director/writer was Sandor Stern who wrote the screenplay for the first Amityville Horror.

None of the numerous films with Amityville in the title, whether official works or others jumping aboard the name, are particularly good films. (Amityville II is probably the best of the bunch because of its deliberately entertaining absurdity). Out of all these, Amityville: The Evil Escapes would have to be a clear winner as the absolute worst. The sole reason for this is the absurd heavy-handedness of Sandor Stern’s direction. The opening exorcism of the house, for example, is preposterously overwrought – bleeding walls, slamming doors, a face appearing in a lamp, flashing lights, the gas flame on the stove erupting in a huge jet, a rocking chair flying across the room at the priest. The effect is more akin to the pop-up effects in a fairground haunted house ride than anything approaching atmosphere.

With that merely the opening act, Sandor Stern’s shocks become increasingly more ridiculous. We subsequently get:- a killer kitchen sink disposal; a phone that melts in priest Frederic Lehne’s hand while a Satanic deep voice says “stay away”; Aron Eisenberg going crazy in the cellar with a possessed chainsaw; the lamp’s electrical cord becoming possessed and strangling the maid; a scene where a plumber crawls under the house, a beam falls across his chest trapping him then a pipe bursts open causing a severed hand to fall on his face and black ichor to ooze out and cause him to melt down, while outside his van spontaneously gets in gear and drives off.

Sandor Stern’s build-up is crude and obvious – you can see where every single set-piece is going from the start of the scene. Each of these might have been competent scares in the hands of a halfway okay director but Stern’s complete lack of any style causes them to collapse into the laughable.

Sandor Stern also wrote a further haunted house film The Strange and Deadly Occurrence (tv movie, 1974), as well as the last people on Earth tv movie Where Have All the People Gone (1974) and the nuclear war thriller Red Alert (tv movie, 1977). As director and writer, Stern had previously made the quite good possessed doll film Pin (1988) and went onto the android film Duplicates (1992) and the plague outbreak thriller Jericho Fever (1993).