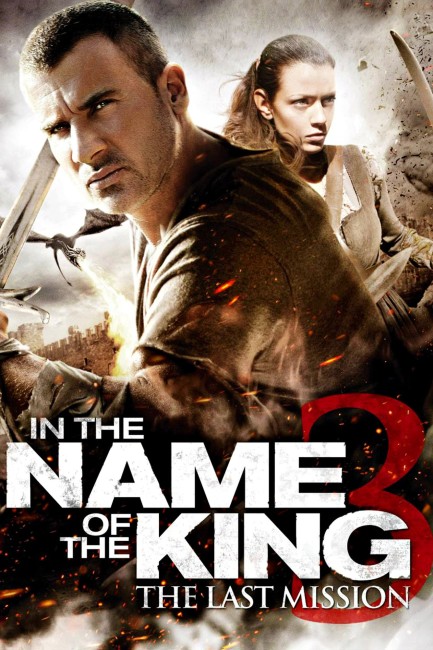 Hazen Kane is an American hitman working in Sofia, Bulgaria. He is given the assignment of kidnapping the daughters of the prince royal. He locks the girls in a shipping container and snatches a pendant that one is wearing. However, the pendant causes a portal to open and whisk Hazen into another world. He finds himself outside a village just as it is attacked by a dragon. After attempting to shoot the dragon off, he is welcomed by two sisters, Arabella and Emeline. They see the similarity between the talisman and the tattoo on Hazen’s wrist and believe he has been chosen to deliver them. Their father was murdered and his throne taken by his cruel brother Tervin. Hazen realises that to get back to Earth he must fulfil his destiny and unite the motley handful of villagers into a fighting force to defeat Tervin and his army.

Uwe Boll has for rightly or wrongly gained a reputation as the world’s worst director. (I am one of those prepared to argue that there are far worse directors out there, if not exactly being someone who will defend Boll’s merits). Boll’s bad reputation began with his string of videogame adaptations, which include the likes of House of the Dead (2003), Alone in the Dark (2005), BloodRayne (2005), Postal (2007) and Far Cry (2008). These were widely ridiculed for such things as Boll’s abandonment of game canon, cheap production values, ridiculous action sequences and equally ridiculous casting choices. Boll seems to have outlasted his critics by sheer persistence and hard work, putting out 2-3 films per year most years. As most videogame producers have trod a wide berth around Boll due to his reputation, he has in more recent years concentrated on often angry and polemical works about the faults of modern society.

Boll ventured into Peter Jackson-type epic fantasy with In the Name of the King: A Dungeon Siege Tale (2007), another of his game adaptations, which was based on the sword-and-sorcery videogame Dungeon Siege (2002). Though greeted with the same ridicule of the rest of Boll’s videogame adaptations, I would argue that it was one of his better films (somewhat). Boll has made a series of sequels with In the Name of the King: Two Worlds (2011) starring Dolph Lundgren and In the Name of the King 3 here – the sequels are called In the Name of the King (a name that was added by Boll) but there is no mention of the copyrighted Dungeon Siege. All three films are only connected in the slightest ways. Two Worlds supposedly takes place in the same universe as the first film a few years on; there is no mention of any such connection here, although the film does copy the basic plot of Two Worlds in having a standard action hero from contemporary Earth being transported into a fantasy kingdom.

Uwe Boll has been improving with his last few films but In the Name of the King 3 is a slip back into shoddy and inferior filmmaking. The plot is a bare bones copy of the one that worked for the previous film and not a whole lot more than that. The film has a rushed, unfinished look to it as though nobody cared much about what they were making and Boll wanted to get it in the can as quickly as possible. Take the scenes where Dominic Purcell flounders about trying to mount a horse – in any other film, these would have been played for comedy but here it is hard to tell if that is the way they are intended.

More so, the film is creatively threadbare fantasy. The plot consists of no more than a few random wilderness encounters with soldiers and a cheap-looking CGI dragon. There is something about a tattoo and a pendant that offers a vague sense of destiny that Dominic Purcell is required to fulfil, which never consists of anything more than a very unclear plan to mount an attack on the evil king’s castle. More crucially though, this is just a fantasy film with a bunch of extras in costumes. It is a world without any depth – there is no culture to the people, no sense of place to any of the locations and crucially no magic to any of the fantasy elements. On the plus side, Bulgaria is the new go-to European location for low-budget filmmakers and does at least offer up the benefit of being able to shoot in a real castle.

With the In the Name of the King films, Boll has cast the lead with action actors – in this case, Dominic Purcell who has eked out a modest career in various mostly action parts, including making a stocky Dracula in Blade Trinity (2004) and appearing for Boll previously in Assault on Wall Street/Bailout: The Age of Greed (2013). While he may be Boll’s new leading man, the bull-necked Purcell is not a particularly expressive actor. He is also the only recognisable name that the film has on hand. The rest of the cast is filled out local Bulgarian actors who are serviceable, even if some of them speak English through accents.

Uwe Boll’s other genre films are:- the serial killer film Sanctimony (2000); the backwoods horror Blackwoods (2002); the high school shooting rampage film Heart of America: Home Room (2002); the zombie film House of the Dead (2003); the monster movie/videogame adaptation Alone in the Dark (2005); the vampire hunting videogame adaptation BloodRayne (2005) and its sequels Bloodrayne: Deliverance (2007) and Bloodrayne: The Third Reich (2011); the videogame adaptation Postal (2007), a surreal bad taste satire about a shooting rampage; Seed (2007) about an executed killer returned from the grave; the videogame adaptation Far Cry (2008); Rampage (2009) about a man on a shooting spree and its sequels Rampage: Capital Punishment (2014) and Rampage: President Down (2016); Stoic (2009) about sadism and brutality in a prison; The Final Storm (2010) about an apocalyptic storm and the arrival of a mysterious stranger; the gonzo bad taste comedy Blubberella (2011) about an overweight vampire heroine; Assault on Wall Street/Bailout: The Age of Greed (2013) about a man on a shooting spree against bankers; and a segment of the horror anthology The Profane Exhibit (2013). Boll has also produced the ghost story They Wait (2007), Alone in the Dark II (2008), Zombie Massacre (2012), Legend of the Red Reaper (2013), Prisoners of the Sun (2013), Morning Star (2014), Viy (2014), Anger of the Dead (2015), Zombie Massacre 2: Reich of the Dead (2015) and Jack Goes Home (2016). Fuck You All: The Uwe Boll Story (2019) is a surprisingly insightful documentary about Boll and his career.