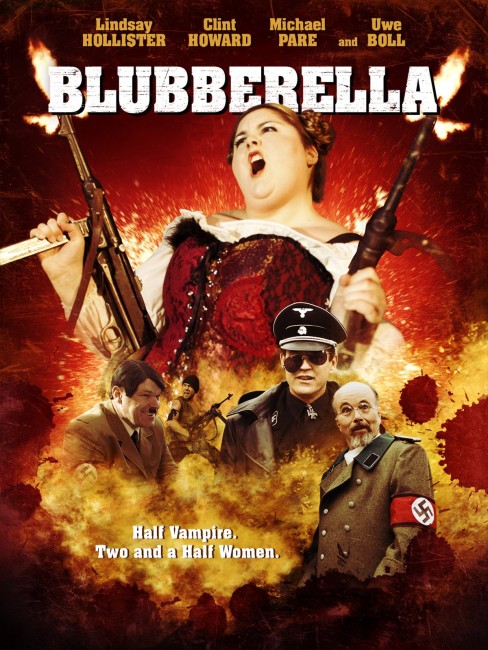 Germany, 1940. The obese Blubberella is a dhampir, born of human and a vampire. She hates Nazis and is upset because all the Jewish boys that she likes dating seem to be disappearing. After she places the bite on a Nazi commandant, he becomes a vampire. The scientist Dr Mangler begins to experiment with the commandant’s blood, thinking this has the possibility to make the Fuhrer immortal. Meanwhile, Blubberella falls in with the local resistance fighters and is attracted to the leader Nathaniel.

I am not among the legion of people that regard Uwe Boll as the world’s worst living director. Many people leap on Boll’s videogame adaptations – House of the Dead (2003), Alone in the Dark (2005), BloodRayne (2005), In the Name of the King: A Dungeon Siege Tale (2007), Far Cry (2008) – for reasons such as their abandonment of game canon, random action scenes and frequently ridiculous casting. They are not particularly great films but I would also say that there are worse directors out there than Uwe Boll. And I do think Boll has gotten better over time with the sheer number of films he puts out – some two to three per year.

Where I do think Uwe Boll is an incredibly bad director is oddly the films that some defend as likeable. Postal (2007) was one of these – a film where Boll threw his hands up and readily ventured into bad taste, deciding to offend as many people as possible. While some people seemed to celebrate this type of humour, all he produced was a badly made and wilfully offensive film.

Blubberella comes in the same bad taste vein as Postal where Boll sets out to offend even more people. If the title Blubberella and the concept – a plus-size heroine fights off Nazis – had not switched one off, then the fact that every second line of the script involves one or other person making some kind of fat joke or insult about Lindsay Hollister’s weight surely would. If that is not enough, Boll has also recruited William Belli – previously a drag performer, see him as one of the girls in Ticked-Off Trannies with Knives (2010) – who plays a gay member of the resistance. He is introduced with the title card “Vadge, however you say fag in German,” and the film, when it is not making fat jokes, is also making lots of gay slur humour in his direction.

Although what takes the cake in this department is when Uwe Boll starts making bad taste jokes about the Holocaust – in the opening scenes, Lindsay Hollister is on Jewishdating.com and wondering why the boys she is setting dates up with are disappearing, while a scene a few minutes later has Brendan Fletcher and William Belli finding a cattle truck of people being shipped off to the death camps and start making jokes about the lack of fashion sense while trying to spray them down with air sanitiser. There is a dream scene where Lindsay Hollister meets Adolf Hitler (played by Boll himself) who has a gangbanger assistant made out in black face. She sits down over a boardgame to give him advice on how to improve his image “You should kinda lay off the ethnic cleansing” and asks him to consider “Am I a fun-loving guy who wants to go out and have beers with friends or am I into mass genocide?”

It should be the purpose of black comedy to push people’s buttons and travel beyond a comfort zone of taste, however you can ask if maybe some of this going too far. A German director dressing up as Adolf Hitler and making bad taste jokes about the Holocaust seems a pretty damn offensively out there taboo area for someone to be venturing into. As with Postal, where Boll appeared as himself and confessed to being a child molester and funding his films with Nazi gold, you wonder if Boll is celebrating his world’s worst filmmaker label a little too much by identifying with social scions in much the same way as children associate with something offensive to thumb their nose at parents.

On the opposite side of the coin, Boll makes films that claim to depict real human atrocities with the likes of Darfur (2009) and Auschwitz (2011). The latter came out only a few months before Blubberella (and was actually shot at the same time using the same sets) but it seems hard to take seriously someone could swing between such extremes – on one hand, making films that claim to depict the real horror of the concentration camps to here making bad Holocaust jokes and in the end credits noting “Extra special thanks to Adolf Hitler for making so many great films possible.”

Blubberella gives the impression of having been made in an entirely ramshackle way. It reminds of the heyday of Roger Corman and films like The Little Shop of Horrors (1960) and The Terror (1963) when Corman had the use of leftover sets or would come in ahead of schedule on one film and decide to make another on the spot. The ramshackle nature of the production is evident in that Boll had begun making Bloodrayne: The Third Reich (2011) in Slovakia and decided to use the WWII era sets and costumes and most of the same cast and crew to shoot another film at the same time. The two films have the same script involving the heroine fighting to stop Hitler being injected with vampire blood after Michael Paré’s commandant is accidentally infected. Most of the cast play the same roles in both films. (Lindsay Hollister claims that she wrote a bunch of jokes in the margins of a script for Bloodrayne: The Third Reich and Boll went and filmed that).

As with Postal, Boll is not a comedy director and lunges at scenes with a complete lack of subtlety. He also reportedly shoots his comedy scenes in one-two takes and there is the sense in a number of scenes that the cast are improvising as they go along. Boll doesn’t even seem to care about the wild anachronisms that abound – though the film’s setting is 1940, we see Lindsay Hollister go to online dating sites and using a cellphone, while there are references to Elvis impersonators, GPS coordinates, Disneyland and celebrities like Lindsay Lohan, Michael Jackson and Mickey Rourke.

Lindsay Hollister, an actress who has played plus-size girls in various films and tv shows, should get some type of award for continuing on in the face of such a barrage of fat jokes. Even so, there are clear scenes where she doesn’t even seem to be trying. She later denounced the film’s title and said she only took the role because of the dearth of film parts for plus-size girls, although in the same interview admits to coming up with some of the fat jokes herself, which doesn’t exactly help her case, as well as saying if she hadn’t taken the role then someone else would, which could possibly be one of the worst justifications for doing a bad thing in the world.

(Winner Worst Film in this site’s Worst Films of 2011 list).