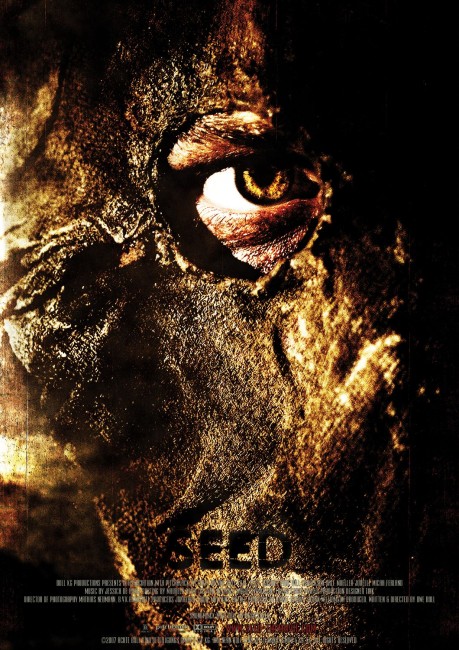 In the town of Sufferton, it is nearing the time of the execution of serial killer Max Seed. The prison warden warns that the electric chair to be used is unsafe and should be replaced but is ignored. The execution goes ahead but fails to kill Seed due to the faulty equipment. Aware that state law requires that a prisoner must be set free if they do not die within 45 seconds, Detective Matt Bishop and the prison officials conspire to bury Seed while he is still alive. However, Seed digs his way up out of the ground. He then heads off on a fresh trail of slaughter after those responsible for burying him.

Seed is another film from Uwe Boll, who in recent years has gained a reputation as the world’s worst director. Undeterred by the vast amount of negative press that accrues around his name particularly in the blogosphere, Boll is a prolific director, often making 2-3 films a year. Most of Boll’s bad reputation centres around his adaptations of popular videogames with the likes of House of the Dead (2003), Alone in the Dark (2005), BloodRayne (2005), Postal (2007) and Far Cry (2008). These gained an extraordinary ire from fans, although I am prepared to defend Uwe Boll as being nothing more than a routine director of direct-to-dvd genre material. Those who call Uwe Boll the world’s worst director clearly haven’t seen enough low-budget genre films. (A full list of Uwe Boll’s genre films is at the bottom of the page).

For much of at least the first 20 minutes, Seed never seems to be going anywhere as a story. This is taken up by scenes of cops sitting around the station watching videos of Seed torturing victims, intercut with the hulking killer sitting in his cell with his face covered by a sack and flashbacks to the police venturing into the killer’s property to investigate. The investigation of the property by torchlight, offering subliminal glimpses of a house of horrors, is something that has well and truly become a cliche by now. Most of the other elements that transpire – the killer returned from the execution chamber to hunt down the investigating detective, the brutality of his trail of killings – seem tiresomely hackneyed genre features. Certainly, Uwe Boll does reasonably well in terms of depicting a dark, dank mood of subterranean chill but his storytelling is dull and formulaic.

Where Uwe Boll places most of his emphasis in Seed is in serving up scenes that hold a reasonable level of brutality:- the killer appearing from under Michael Eklund’s bed and then biting his lip off; Ralf Moeller impaled with a pole through his stomach. The most brutal scene is one where the killer has a housewife bound up in a chair and Boll’s camera sits in medium wide-angle watching as the killer starts gently tapping her face with a hammer, which become more severe blows that build up to him whacking at her, battering her brains out and splattering the room with blood. It is one of the most brutal scenes that one has scene in a horror film in some time.

The film also reaches an incredibly grim ending where [PLOT SPOILERS] the killer threatens to kill Michael Paré’s wife Thea Gill and daughter Jodelle Micah Ferland unless Paré shoots himself, the killer then shoots the wife as Paré wavers, before Paré shoots himself in the head trying to spare the daughter, with the last image of the film being the daughter locked in the cell with Paré’s dead body.