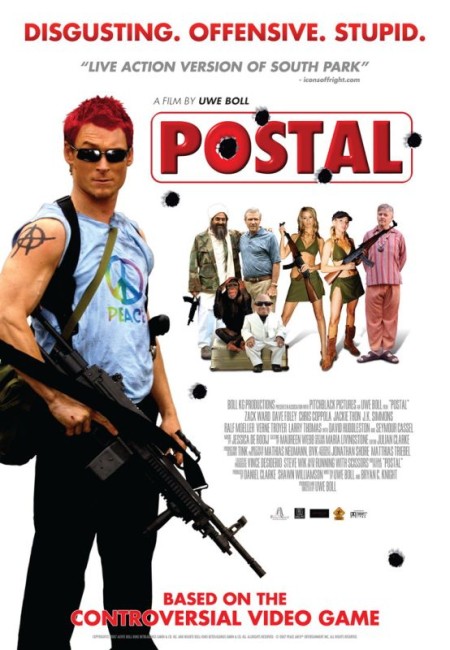 In the small town of Paradise, Postal Dude lives in a trailer home with his obese wife. As he searches for a job, Postal Dude is frustrated by many of the people he encounters. Meanwhile, Postal Dude’s Uncle Dave runs a religious cult that is now coming under pressure by the IRS. After the latest frustration, Postal Dude decides to join Uncle Dave’s scheme to rob a shipment of Krotchy dolls – with the rest of the shipment lost at sea, these will be able to be sold for collector’s prices. They plan a raid during the opening of the Little Germany theme park. At the same time, Taliban terrorists led by Osama bin Laden are planning an apocalyptic attack on the USA by unleashing avian bird flu hidden in the Krotchy dolls. The park opening ends in a massive shootout that has Postal Dude wrongly blamed for the massacre. Hunted by a lynch mob, Postal Dude takes refuge in the cult’s bomb shelter where Dave’s assistant Richard unveils his plans to unleash the end of the world according to the fake Bible that Dave created. Aboveground, Postal Dude, Taliban, lynch mobs and cultists all come together in a massive shootout.

German director Uwe Boll has a reputation as the worst director currently at work in the world. Boll gained his reputation after his trio of videogame adaptations – House of the Dead (2003), Alone in the Dark (2005) and BloodRayne (2005). Most of the vitriol initially came from fans of the videogames, pissed off at Boll’s liberties with elements from the game. This soon extended beyond with loud derision poured on Boll’s random plotting, his disastrous miscasting and general bad filmmaking. In 2008, an online petition was created, begging Uwe Boll to stop making films, which has garnered some 320,000 signatures as of this writing. This contrarily only seems to have given Uwe Boll inspiration – in 2006, in a scene that was originally filmed to be included in Postal, Boll challenged five critics to a boxing match in Vancouver. The anti-Boll sentiment has extended to the fact that many of the name actors that appear in Postal had to defy the advice of their agents to take the roles. When it was released, the US distributor cancelled plans to release Postal in 1500 theatres and showed it only four theatres nationwide.

Postal is based on the popular game from Running With Scissors, which was released in 1997 – although the film appears to more closely draw on elements from the sequel Postal 2 (2003). In the game, the player Postal Dude is required to move through his hometown of Paradise, Arizona and undertake various mundane tasks, which were frequently denoted by long waits, other people interrupting or exhibiting rude behaviour. The player could choose to either endure these or react by unleashing the enormous arsenal of available firepower that one can pick up throughout the game. The game was made with a satirical, frequently surreal sense of humour – among the targets that one could shoot there were the hero’s nagging wife, Taliban, SWAT teams, various government agencies and cult members, while actor Gary Coleman (replaced by Verne Troyer here) had an extended cameo as himself. It is also possible throughout the game (in a scene briefly recreated in the film) to use cats as gun silencers by placing the gun barrel up the cat’s anus (something that does not appear to do any damage to the cat), while Postal Dude can regain/increase his health points by smoking a crack pipe. The game attracted considerable controversy for its violence.

I stand aside from the majority and am not one of the naysayers who holds Uwe Boll to be the worst thing since Edward D. Wood Jr. There are far many worse contenders. Boll only seems like a B-budget director working with sometimes better budgets. To Uwe Boll’s credit, with Postal he at least makes more effort than usual to remain faithful to the game canon than he has in all his other videogame-adapted films, with Running With Scissors having actively participated in the development of the film and being granted veto over the script.

However, Postal is the first of Uwe Boll’s films where I can say I feel that his reputation as a bad movie director is justified. It is a film where Boll has set out to be as rude and offensive as possible. Nothing particularly wrong with this – after all, Boll is fairly much in keeping with the nature of the original videogame. I was prepared to give Boll some rope from the opening scene, which comes in extraordinary bad taste but is nevertheless rather funny with the 9/11 suicide pilots in a plane, arguing with Osama bin Laden on a cellphone about the number of virgins they are supposed to be rewarded with in Heaven, getting fed up and deciding to fly to the Bahamas instead, before the passengers burst into the cockpit and knock the controls, causing them to hit the World Trade Center, splattering a window-washer.

Elsewhere, Uwe Boll throws in as many bad taste jokes that he can think up:- caricatures of white trash trailer park rednecks, the grossly obese, the intellectually handicapped, suicide bombers, welfare recipients, police brutality, gay jokes, gags about Tom Cruise, Nazis and concentration camps. There is a surprisingly convincing George W. Bush lookalike who goes skipping off into the sunset holding hands with Osama bin Laden as nuclear war reigns down around them at the end of the film. It is Uwe Boll determined to be as offensive as possible – you almost get the feeling he has written a checklist to see how many hot-button topics he could fire off. Clearly, Uwe Boll has contempt for much in America today, although it is hard to tell from the film exactly what point he is trying to make with his satire.

Boll turns up in a cameo as himself at the Little Germany theme park where he agrees that he financed his films with Nazi gold and admitting to paedophile impulses towards the children in the audience, before being attacked by the game’s creator Vince Desiderio for destroying the game. During the massacre, Boll is shot in the crotch and goes down with the line “I hate videogames.” All of this seems to be Uwe Boll doing one giant fuck-you to his critics (to which you could probably substitute the phrase the entire world). When someone associates themselves with Nazis and paedophilia, it seems like the ultimate fuck-you that passes beyond a mere bad taste joke into identifying oneself with what is considered morally repugnant in society.

It seems a strange and almost irredeemable place that Uwe Boll has placed himself into, even in jest. From a psychological perspective, the people who identify with and celebrate society’s taboo figures are ones who feel so marginalised by the mainstream that they adopt negative values as a badge of defiance. This surely seems to indicate that beneath all his seeming indifference to criticism Uwe Boll is feeling just a tad hurt and rejected.

Boll made a point of shooting Postal using only 2-3 takes maximum on the grounds that over-rehearsal causes spontaneity to die. Unfortunately, this results in something that looks like an amateur film made with professional actors. What someone needs to tell Uwe Boll (among the great line of people lined up to remind him of his shortcomings) is that he is not a comedy director. The tone of the film throughout is mostly one of raucous farce. There are sporadic moments where the film is funny and Boll sometimes hits the note of black comedy he is aiming for on the head – like the opening suicide bomber flight or the scenes with Zack Ward crawling through the welfare office trying to get a lower number as a massive shootout erupts around him – but mostly he doesn’t. Most of the time, the film is about tossing up caricatures of the intellectually handicapped and so on, scenes of people acting stupid, even Dave Foley going full frontal at us, and expecting us to find these things funny in themselves.

I am trying to figure out why I found Postal to be a moronic and mean-spirited film and yet am happy to enjoy other works that set out to be as offensive as possible such as the films of John Waters, tv’s South Park (1997– ) or Borat: Cultural Learnings of America for Make Benefit Glorious Nation of Kazakhstan (2006). It may well be simply a question of sophistication. Sacha Baron Cohen is an extremely talented performer/improviser, while Trey Parker and Matt Stone have a sense of humour that is clever and witty, and you cannot help but enjoy John Waters’ gleeful filthiness. Uwe Boll’s crime is that for all the bad taste he slings at his audience, he fails to make any of it particularly funny. Boll’s sense of humour seems more down around the crude, vulgar level of Jason Friedberg and Aaron Seltzer of Epic Movie (2007), Meet the Spartans (2008), Disaster Movie (2008) and Vampires Suck (2010) fame. Indeed, Postal could almost be a John Waters film as directed by Friedberg and Seltzer.

In 2013, Uwe Boll launched a kickstarter campaign to make Postal 2, although this was abandoned after the campaign failed to reach its target budget.