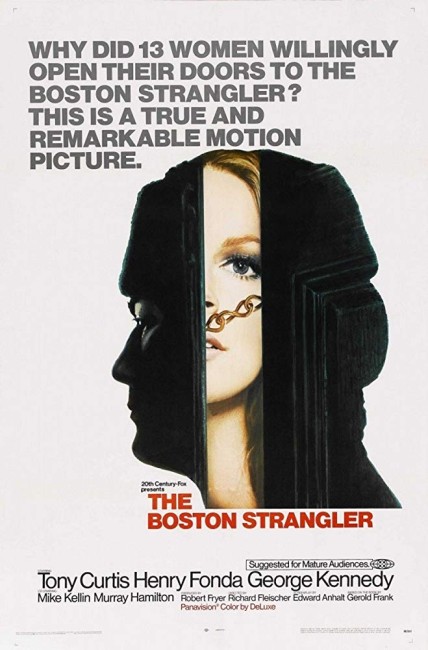 Boston is terrorized by a series of killings where women of all ages are found strangled in their apartments. The killer is nicknamed The Boston Strangler. Law lecturer John S. Bottomly is given the job of setting up the Strangler Bureau, a body to coordinate police efforts between the various boroughs that the killings occur in. As the killings mount, in desperation the police shake down all known sex offenders and turn to psychic Peter Hurkos. Their breakthrough occurs when boiler maintenance man Albert De Salvo is placed in a psychiatric institution after attempting to break into an apartment and evidence is found linking him to one of the killings. Bottomly is so eager to interview De Salvo that he agrees to sign a waiver that whatever he obtains cannot be used in evidence. In the interview room, Bottomly pushes to break through De Salvo’s split personality and make him remember what happened.

This is a film based on the world-famous Boston Strangler killings, which occurred between 1962 and 1964. During this time, thirteen women were raped and strangled, the item of strangulation always being left tied in a bow at their necks. Coming from oft genre-associated hand Richard Fleischer, who had directed the likes of 20,000 Leagues Under the Sea (1954), Fantastic Voyage (1966) and Doctor Dolittle (1967), The Boston Strangler is an often impressive film.

Rather than concentrate on the killings themselves, Richard Fleischer pushes them to the background and instead focuses on the social reaction to the crimes. In these scenes, Fleischer makes inventive use of split-screen opticals to portray multiple points-of-view and citywide reactions at the same time. Equally distinctive are the flashbacks scenes as Henry Fonda pushes Tony Curtis’s De Salvo to remember, which combine both black-and-white and colour film.

Certainly, the film varies widely from the details of the actual case. In particular, the scene where the police finally pin the crime on Albert De Salvo by seeing his wounded hand in a chance encounter a lift is an entire fiction. In fact, De Salvo had been placed in a psychiatric institution after conducting a rape. A fellow inmate suspected De Salvo might be the Boston Strangler and De Salvo then confessed to the crimes to his lawyer F. Lee Bailey. In the film, for reasons unclear, the character of F. Lee Bailey has been entirely written out.

Furthermore, the climactic interview scenes, giving De Salvo a diagnosis of multiple personality disorder and where the final breakthrough causes him to snap altogether, never happened that way in real life – De Salvo willingly confessed and seemed proud of the crimes. Henry Fonda’s portrayal of Bottomly also makes him seem much more heroic that was actually the case, whereas Bottomly was widely regarded by those in the know as being a near incompetent bumbler. (Among other things, when Bottomly obtained De Salvo’s confession, the questions he asked were found under a thorough examination of the transcripts to be often leading and placing information into De Salvo’s mouth).

It is important to remember that, as the film accurately portrays, Albert De Salvo was never criminally convicted for any of the Boston Strangler killings. Rather F. Lee Bailey negotiated a plea bargain in return for De Salvo’s confession and De Salvo was instead jailed for life on charges of sexual assault and robbery. After serving six years of his jail term, De Salvo was stabbed and killed by a fellow inmate in 1973. Several years after the incident, a number of speculations emerged that De Salvo was not the Boston Strangler – many of the details of his confession do not match and he later recanted the confession anyway – and it was believed that he was an egotist who sought the notoriety of the crime. In 2001, De Salvo’s family in conjunction with the family of victim Mary Sullivan petitioned the courts to have De Salvo’s body exhumed so that his DNA could be tested against the Sullivan crime scene. The results showed a negative match, meaning that there was no corroborating evidence, outside of Albert De Salvo’s retracted confession, that he was the Boston Strangler.

What is also interesting, if the investigation shown in the film is an accurate portrayal, is the primitiveness of police detection methods with the success of the operation appearing to owe more to chance than criminology. In one scene, the police are urged to: “Bring in the people you’d usually ignore – the peepers, the men’s room queens, the exhibitionists, the subway jostlers, the dirty word specialists.” At another point, the film refers to ‘faggots’ and shows the police hounding a gay man. Such typing of all deviance from the heterosexual norm alongside a serial rapist/strangler says interesting things about how the times viewed alternative sexual mores.

In the end, what stands out in the film is less it as a whole as some of its individual vignettes. There is a highly amusing scene where a fake colonel who follows women home and tries to seduce them is arrested, the police displaying both shock and admiration as he casually tells how he has managed to successfully sleep with over 500 women. Or the scene with real-life psychic Peter Hurkos (played here by George Voskovec) who determines that a cop who turns up late for work was with his girlfriend instead of caught in traffic and then manages to uncannily pick the details of the just-received Eugene O’Rourke letter. The scenes with William Hickey as O’Rourke, pitifully crying but in the end demonstrating a pathetic dignity, are momentarily effective.

Tony Curtis, away from the romantic fluff and light comedy he was typecast in for most of the era, has the most serious (and critically acclaimed) role he had played up to that time and is interesting, if not entirely effective. Henry Fonda gives an extremely dull performance as Bottomly.

Richard Fleischer ventured into the true crime genre upon two other occasions with Compulsion (1959) and the true life serial killer film 10 Rillington Place (1971). Fleischer’s other genre films are:– Disney’s classic Jules Verne adaptation 20,000 Leagues Under the Sea (1954), Fantastic Voyage (1966) about a miniaturized submarine journey inside the human body, the musical version of Doctor Dolittle (1967), the psycho-thriller See No Evil/Blind Terror (1971), the over-populated future film Soylent Green (1973), Amityville 3-D (1983), and the Robert E. Howard adaptations Conan the Destroyer (1984) and Red Sonja (1985).