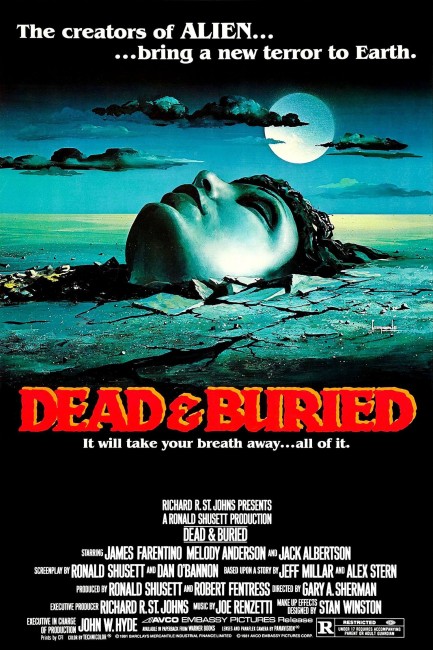 In the small coastal town of Potter’s Bluff, a group of residents are sadistically killing tourists and other residents and filming their deaths. Sheriff Dan Gillis discovers that even after they have been murdered in horrible ways, the victims are still alive. Trying to get to the bottom of the killings, he finds that a number of the townspeople are listed as being medically dead. He is not sure who around him, even possibly his wife, is part of the web of killings and mysterious happenings. The secret may lie with the local mortician G. William Dobbs who was fired from a hospital in Rhode Island for conducting unauthorised experiments with corpses.

Screenwriters Dan O’Bannon and Ronald Shusett had enormous success with their script for Alien (1979) and this was the film they made next. The director was Gary Sherman whose interesting Deathline/Raw Meat (1972) has a small cult and who would later go onto make Poltergeist III (1988), Lisa (1990), the medium thriller Murderous Vision (tv movie, 1991) and 39: A Film by Carroll McKane (2006). He has also acted as a producer on the tv series Poltergeist: The Legacy (1996-9) and the tv movie The Glow (2002) and wrote the story for the psychotherapy psycho-thriller Phobia (1980).

The film was made the early 1980s at the time of a revolution in makeup effects technology where it gives the appearance of having been construed solely as an exercise in technical showmanship. the plot seems to stop every few minutes for a new showcase killing. One victim is burned alive; another hacked up; a hospitalised burn victim gets a syringe stabbed in his eyeball by a nurse; a hitchhiker’s head is bashed in with a rock; a doctor has his mouth pumped out with acid. There is precious little redeeming style to make Dead & Buried look like anything more than the cold and ugly exercise in sadism it is. (It is also very dimly lit, which makes it difficult to see what is going on on video).

The film is a well-budgeted production but it is wrecked by the stupidity of the script. The most annoying aspect is the twist ending, which makes no sense in terms of what has gone on before. It makes the actions of the characters in the film seem senseless – how is it that some of the reanimated dead can remember who they are but others have no idea, despite the fact that they are often visibly crumbling apart?

The film at least extends the ideas of Night of the Living Dead (1968), the progenitor of the modern zombie genre, as far as they can go – the dead are no longer merely trying to devour us, they are us and we haven’t even noticed. If Night of the Living Dead was an echo of the social turmoil of the 1960s, then Dead & Buried is a 1980s riposte where the revolutionaries of the 1960s have settled down to boring middle-class lifestyles.

The most convincing parts of the film are those scenes involving Jack Albertson’s mortician. O’Bannon and Shusett give the appearance of actually having gone and done some research on the unromanticised aspects of death and have written the character accordingly. Albertson has one extraordinary soliloquy where he details his ‘art’: “I’ve replaced missing eyeballs with sawdust and glued the lids together, I’ve used bent aluminium combs for dentures, I’ve used the back part of the scalp when there was no front part, and I’ve folded one hand over wadded-up newspapers when the other had no fingers. You find this obscene, Sheriff? You know what is really obscene? Look at the work I’ve done. This is an art and I am the artist. What can you remember about a sealed box, a sealed coffin casket? That is obscene.”

Screenwriter Dan O’Bannon started out as co-writer on Dark Star (1974) and then had the huge hit of Alien (1979). He subsequently turned in episodes of the adult animation anthology Heavy Metal (1981), the hi-tech helicopter action film Blue Thunder (1983), Tobe Hooper’s soul-sucking alien vampire film Lifeforce (1985) and remake of Invaders from Mars (1986), and the Philip K. Dick adaptations Total Recall (1990) and Screamers (1995), and the Canadian horror film Hemoglobin/Bleeders (1997), as well as directing the zombie black comedy Return of the Living Dead (1985) and the H.P. Lovecraft adaptation The Resurrected (1992). Jodorowsky’s Dune (2013) details O’Bannon’s work as special effects director on Alejandro Jodorowsky’s failed adaptation of Dune (1965) in the 1970s.