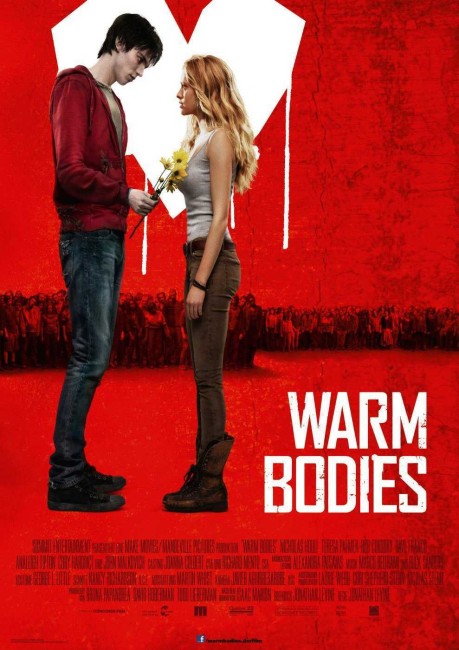 Civilisation has fallen in a zombie apocalypse. R is a zombie who aimlessly wanders an airport with no memory of who he used to be. One day he and the other zombies come up against a human sortie. R kills one of the humans, Perry, and eagerly devours his brains. This allows him to inherit Perry’s memories and he immediately discovers feelings for Perry’s girlfriend Julie, the daughter of General Grigio, the leader of the human encampment. R takes Julie away with him – in his hesitant way promising that he will protect her. As he sequesters her, a relationship of sorts grows between them. Julie returns to the city and R follows. Behind, the other zombies start to be affected by the emotion they saw between the two of them. This is resented by the Bonies, zombies that are too far gone and have lost their skin. Inside the encampment, Julie has difficulty explaining R to her father, a militant general who only wants to put a bullet into R’s head.

When I first read the advance notices about Warm Bodies, I thought there was an utter lameness to the concept – a teen romantic comedy modelled along the lines of Twilight (2008) but with zombies instead of vampires. There seemed something fundamentally wrong about the idea. Vampires are dark, magnetic seducers, they embody forbidden romance – they are natural fodder for romance. Zombies on the other hand are mindless stumbling things, they are not by their nature sexy, they are rotting and represent death and decay; they don’t want to seduce, they are just walking stomachs that only want to tear you apart and feast upon your brains.

The film is based on Warm Bodies (2010), a novel by Seattle based writer Isaac Marion. Marion originally published the genesis of the idea as an 1800 word short story I am a Zombie Filled with Love that was published online (the original text can be found here Burning Building) and this attracted a publishing contract. The book was sufficiently successful that Marion put together a prequel The New Hunger (2013) and a sequel The Burning World (2017). The film adaptation has been taken up by Jonathan Levine, a young director who is gaining a slowly rising name with works such as the slasher film All the Boys Love Mandy Lane (2006), the Coming of Age film The Wackness (2008), the acclaimed Joseph Gordon-Levitt cancer drama 50/50 (2011), The Night Before (2015), Snatched (2017) and Long Shot (2019).

Despite a lack of enthusiasm for the film’s approach, I soon began to warm to Warm Bodies. It does a number of things that seem fundamentally incongruous – it is trying to be a supernatural teen romance a la Twilight; the lead romantic figure is a zombie; it is also playing both the romance and zombie film angle as a comedy. Despite the number of juggling acts this requires, the film manages surprisingly enough to make its melange of ideas work for it.

Some of Nicholas Hoult’s voiceover lines during the introductory scenes come across as straining a little too much in trying to go for laughs but once the film settles in, its premise comes with a droll amusement – in the goofy scenes of Nicholas Hoult looking on as Teresa Palmer sleeps, she trying to educate him about driving a car and so on, and especially with some of the droll handful of lines that Rob Corddry gets. Moreover, the odd flaky romantic angle works for the film. Teresa Palmer plays with a winsome sincerity that holds more effort in a couple of scenes than Kristen Stewart seemed to be making throughout the entirety of the Twilight sequels.

Both the low-budget gore-drenched zombie film and the gonzo zombie film have felt conceptually exhausted in the last few years. The genre feels like it has become trapped in repetition and self-parody. It is some surprise then that Warm Bodies, which pitches itself more to teen/emo audiences than it does to zombie movie fans, manages to inject some new blood. Here we have a zombie film that tries to do something distinctly different with the genre’s ideas. It gives some original spins. There is the idea, building somewhat on the one introduced in Return of the Living Dead (1985), as to why zombies need to eat brains – because they regard them as a delicacy and more so because it allows them to imbibe the memories of the former owner (which of course becomes the pretext for the film to offer up its unlikely romance – Nicholas Hoult eats the brains of Teresa Palmer’s boyfriend and inherits his memories and feelings).

We have seen the zombie relationship drama before – in the silly My Boyfriend’s Back (1993), in the more recent, more comedic A Little Bit Zombie (2012) and the subsequent Burying the Ex (2014) and Life After Beth (2014) and approached seriously in Zombie Honeymoon (2004) and Make-Out With Violence (2008) – while the more serious British duo of films from Andrew Parkinson, I, Zombie: A Chronicle of Pain (1998) and Dead Creatures (2001), tell stories where the lead character is a zombie. However, Warm Bodies goes one step further and offers up the novelty of a zombie film that is narrated in the first-person by a zombie.

The zombie film is largely one that is limited in terms of storytelling possibilities. The antagonists are either a horde of shuffling creatures with no minds or very rarely any speech. About the only stories available are those of surviving humans fending the zombie hordes off and struggling for survival, or else stories of how the initial outbreak comes to overwhelm society. Warm Bodies tries to do something different – it asks, once we have the zombie apocalypse what comes next? This was a question that George Romero began to tackle in his latter zombie films like Day of the Dead (1985), Land of the Dead (2005) and Survival of the Dead (2009) where he saw zombies starting to regain memories of their old lives and the question emerging of whether the two species were capable of mutual survival, while zombie integration into society was tackled more comically at the end of Shaun of the Dead and more substantially in Fido (2006).

Warm Bodies sees the zombies as slowly evolving into something that is becoming more human and eventually a mutual coexistence between the two species. Although the film is very vague about how this happens – we get the impression that this spontaneously happened when the other zombies saw Nicholas Hoult and Teresa Palmer holding hands. The film also has to make a differentiation between the freshly dead (who seem immune to physical decay) and those who have lost their skeletons and are thus evil in order to give it a conflict. Nothing world changing, but it does become oddly appealing.