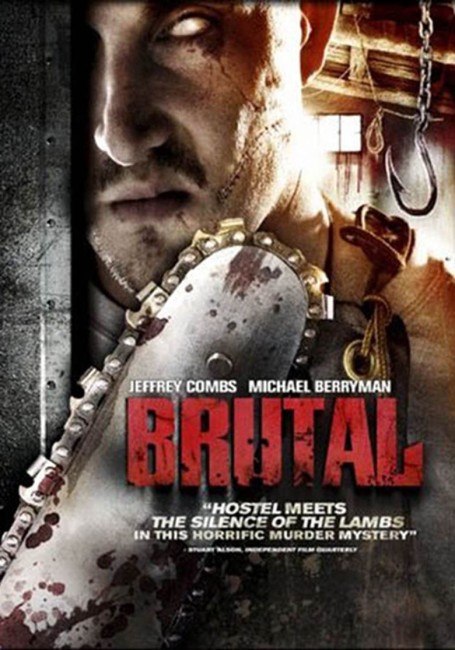 The sleepy town of Blackwater Valley is being plagued by a serial killer. This is local schoolteacher Evan Milbrook who always leaves flowers on the bodies he slaughters. Deputy Zoe Adams is having an affair with her married boss Sheriff Jimmy Fleck. In investigating the murders, Zoe tries to make the case for a serial killer but Fleck seems more interested in focusing on his re-election campaign.

Brutal is exactly like a 1970s/early 80s psycho film. It feels as though Ethan Wiley has wound back the clock on the forensic profiling that came into the genre after The Silence of the Lambs (1991) to a point where psychos were just plain crazy and films never concerned themselves with matters like psychological motivation. It is never a particularly interesting psycho plot that Wiley comes up with – there is a singular lack of suspense and twists to the plot. He adopts the police procedural style in telling it, but just as often the main plot is sidetracked by the not terribly interesting B plot of the affair going on between sheriff Jeffrey Combs and deputy Sarah Thompson.

Wiley does eventually throw in some serial killer motivation, although this must count as one of the most ridiculous to ever grace the genre – where Eric Lange’s killer is killing women who live on streets named after flowers, leaving said flower on the body, and moreover that the number of petals on the flower have been chosen to follow a Fibonacci Number that corresponds to the number of their street address.

Ethan Wiley’s focus in the film is crude. Your hopes sink within the opening scenes as milquetoast Eric Lange offers stranded Crystal Stone a ride where the film clumsily swings between reversals – of she the innocent hitchhiker suspecting that he is potentially dangerous to she then turning and robbing him, before he reveals he is the killer of the piece. As each reversal of expectations clumsily arrives, we are yawning because we have seen everything before and can predict where each twist is going.

More than anything, you feel that Ethan Wiley was inspired to make the film after the success of the Torture Porn fad with films like Saw (2004) and sequels and Hostel (2005). Thus we get some nastily gore-heavy despatches – Crystal Stone being strung up in the barn and a power drill driven into her body; we seeing Eric Lange sawing through India Dupree’s throat and so on. The film features some astonishingly bad dialogue – at one point, Whitney Anderson tries to hide her boyfriend’s corpse after he has overdosed on Viagra: “Dad’ll kill me if he finds out I have stolen his boner medication.”

Most of the cast are unknowns with the exceptions of two genre regulars, Jeffrey Combs and Michael Berryman. Combs plays an okay role as the sheriff, although his otherwise sympathetic character gets a left field and frankly unbelievable twist toward the end when he employs a hitman to assassinate Sarah Thompson to stop her embarrassing his re-election chances. Much better is Michael Berryman, best known as Bluto from The Hills Have Eyes (1977), who for once, perhaps the only time in his long genre career, has a sympathetic role – as a dog trainer who suffers from OCD. This feels like the one original character that the film manages to craft and Berryman takes considerable opportunity to make the role compassionate and endearing.