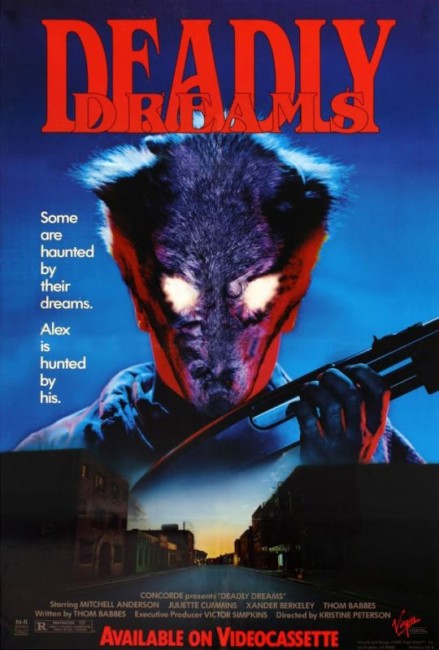 Eleven-year-old Alex Torme is witness as Norman Perkins, a man whose business has been ruined by his father, bursts into the family home wearing a mask made out of an animal’s head and shoots both of his parents with a shotgun. Ten years later and Alex is a university student with ambitions of being a writer. His older brother Jack manages the family business and pressures Alex to turn his half-ownership of the business over to him. Alex becomes involved with Maggie Kallir after his best friend Danny puts him up to a prank in a bar. At the same time, Alex is troubled by dreams in which he sees Norman Perkins coming after him in his animal-headed mask. He sees the figure of Perkins following him everywhere but nobody else is able to see anything and Alex cannot be sure if he is seeing things or if it is Danny playing more of his pranks.

A Nightmare on Elm Street (1984) and sequels were a considerable success in the late 1980s. They inspired a spate of copies, all centring around various boogiemen haunting people’s dreams. Deadly Dreams was a video release that was more than clearly made to capitalise on the spate of Elm Street-inspired dream horrors.

It soon becomes apparent after sitting to watch Deadly Dreams that it is at best only a weak copy of an Elm Street film. The film is made with a basic B-budget professionalism but the entire show is killed by an incredibly sedate pace. For the greater part of the first half, more interest seems generated around Mitchell Anderson’s asking out Juliette Cummins, his jerk best friend Thom Babbes’s pranks and his brother Xander Berkeley’s dealings than it is with the dream figure of The Hunter. Things perk up mildly with one scene where Mitchell Anderson finds a slaughtered deer left in his bathtub and his name painted in blood on the wall and everything predictably being gone when he returns with witnesses. On the other hand, when you contrast this with the outré material in Deadly Dreams‘ model A Nightmare on Elm Street, there is a thorough tameness to what is on offer here.

Moreover, as the mid-film twist becomes apparent [PLOT SPOILERS], Deadly Dreams is not an A Nightmare on Elm Street copy at all but a psycho-thriller where the dream horrors are eventually dismissed with a mundane explanation. This holds quite a degree of similarity to Bad Dreams (1988), a more high profile Elm Street copy that came out the same year, which started out with an interesting plot about a cult survivor (Jennifer Rubin) being haunted from beyond the grave by the cult leader but suffered from a mundane plot twist that improbably revealed it all to be caused by psychotropic drugs that a deranged psychiatrist was feeding her.

[PLOT SPOILERS CONTINUE] Deadly Dreams could be A Nightmare on Elm Street by way of Les Diaboliques (1955). It is eventually revealed that Mitchell Anderson’s girlfriend Juliette Cummins is his brother Xander Berkeley’s girlfriend and that Xander has set everything up to drive Mitchell crazy and then kill him off so that he can claim his inheritance. Certainly, this twist does produce something that finally makes one sit up and become interested in the otherwise torpid film.

It also makes the film somewhat of a cheat – it is called Deadly Dreams and concerns itself with the figure of The Hunter haunting Mitchell Anderson principally in his dreams but then we then learn that the figure’s appearances were only physical and what Mitchell sees in his dreams is of no relevance to the film at all. It is a case of the film setting out to misdirect us and make us think we are watching an Elm Street copy and to then abruptly repudiate the dream element, which seems a major cheat when it is revealed.

[PLOT SPOILERS CONTINUE] There is an even more improbable twist that comes at the end where Mitchell Anderson is killed and we cut forward to one year later and see Xander Berkeley and Juliette Cummins together. While on the phone to her mother, she lets The Hunter into the house to kill Xander, revealing that she is in fact Norman Perkins’ daughter. Who exactly the Hunter figure that we see throughout is is never explained.

Mitchell Anderson went onto a number of other roles on tv and today is a restaurateur and gay columnist. Juliette Cummins appeared in a handful of other horror films – Friday the 13th Part V: A New Beginning (1985), Psycho III (1986) and Slumber Party Massacre II (1987) – and then retired as an actress to become a schoolteacher. The only one who went onto any other name was Xander Berkeley who has appeared in a number of high profile films and tv guest roles, including roles in genre films like Candyman (1992), Apollo 13 (1995) and Gattaca (1997). Screenwriter Thom Babbes also appears on screen as Mitchell Anderson’s jerk best friend but has written no other films.